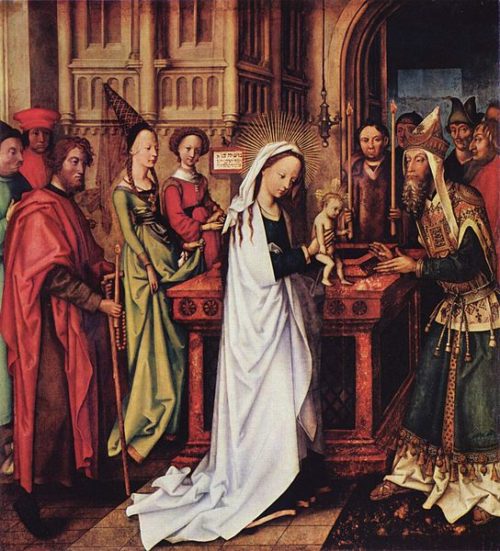 [Episcopal News Service] Comedy Central TV personality Stephen Colbert has bemoaned the loss of “the true meaning of Candlemas,” but a group of nuns in Massachusetts and others across the nation are creating new ways to revive and to celebrate the time-honored celebration.

Also called the Feast of the Presentation of the Lord, Candlemas falls on Feb. 2 and is the Christian festival marking the ritual presentation of Jesus in the temple in Jerusalem, during which prophets Simeon and Anna proclaimed him the Messiah. Simeon spoke the prayer known as the “Nunc Dimittis,” calling the baby “a light to lighten the gentiles.” The date is 40 days after the birth of Christ when he, like all Jewish boys, was taken to the temple to be presented to God and when his mother Mary was declared “clean.”

In Europe, the festival traditionally was marked by the blessing of candles for use in churches and homes, giving it the common name of Candle-mass. For many, it was regarded as the midpoint of winter. In the United States, it became known as “Groundhog Day,” where Punxsutawney Phil’s shadow reportedly predicts how much longer winter will last — prompting Colbert to lament that the Christian holiday had been “all ground-hogged up and commercialized.”

Sister Adele Marie Ryan, superior of the Society of St. Margaret in Duxbury, Massachusetts, said that the order had celebrated Candlemas since 1855; this year the community braved frosty temperatures, the threat of snow, Super Bowl competition and a variation of the traditional ceremony to host a Feb. 3 afternoon celebration.

“We had had some snow in the morning, and there was more forecast for the evening, but we still had a total of 41 in the congregation and it went very, very nicely,” said Ryan during a Feb. 4 telephone interview.

The celebration was “a bit of a takeoff on the traditional ceremonies,” she added. It included Scripture, reflections, music and plainchant – a big draw – and was crafted as an Evening Prayer liturgy “to be ecumenical – and it was,” drawing from the larger community, she said.

But rather than at the beginning, the candles were blessed and distributed at the conclusion of the service, the symbolism being that, “having listened to the Scripture readings and reflections and sung the hymns, then the people have encountered Christ in the light and they carry the candles out into the world as people who are bearing the light of Christ,” she said.

‘Our stories are bridges’
In downtown Los Angeles, the traditional Candlemas observance merged with the Hispanic tradition of “el Día de la Candelaria,” where families traditionally dress the “niño dios” (infant Jesus figurine) from their nativity set in a new outfit and bring it to the church to be blessed, said the Rev. Frank Alton, priest-in-charge of the Cathedral congregation of St. Athanasius.

Sheniffer Aldana, 28, who attends St. Mary’s Church in Los Angeles, said she brought a niño dios to the St. Athanasius ceremony to be blessed because she wanted to be more traditional, she said. Others brought candles to be blessed.

“Feb. 2 is between Christmas and Lent and it’s a bit of a down time, but it ends the Advent-Christmas-Epiphany cycle and it’s significant in the Spanish part of this community. It seemed like a way to reach out to the larger community … [with] folktales from different communities,” said Alton.

During the service, Alton announced that he just had received word that a parishioner was in the hospital giving birth. “So, the story comes alive.”

“A lot of the folks in our congregation have assumed that el Día de la Candelaria is only a Latin American tradition because they’ve been the only ones who’ve celebrated it here,” he added. “So to hear stories from Europe and to worship in English and Spanish opened their eyes.

“That’s what I’m wanting to do, to create this sense of openness to each other and to realize our stories are the bridges we will use to connect with each other.”

There was, for example, the story of how Candlemas became a matchmaker for Roger Leachman, 70, who serves as the judge of elections during annual convention meetings of the Diocese of Los Angeles.

“When I was just a wee lad growing up in Scotland … part of the way through winter the teacher would come in, and all the children, we all got new candles,” he told the gathering.

The teacher explained that “Candlemas was halfway through winter, halfway from the shortest day to the day when the days and nights were the same … and [that it] was 40 days after Christmas, when the baby Jesus was first taken to the temple,” said Leachman, wearing a traditional Scottish red-and-green tartan kilt.

To mark the occasion, schoolchildren contributed their allowances so the teacher could buy sweets and biscuits and cakes throughout the school year, he explained. “The lass and the lad who brought the most money were made the king and queen of the class.”

“We would carry them out after class. We’d cross our hands and make a seat and carry them out, and they had privileges. The king and queen would each determine one afternoon when we didn’t have school, when we’d have a half-day off. They could also declare anyone who was due punishment was relieved of that punishment. You could make some real good friends that way.”

After saving enough to become the class king at age 13, he rescued a certain young lady named Maggie from detention. “Years later, I bumped into her and she remembered me,” he recalled. “She asked me out, and we went dancing. The relationship grew so much that Maggie and I got married on Feb. 2 to commemorate the day that I made the first move.

“To this day, when we celebrate our wedding anniversary, we take candles to be blessed by the priest, and we have them on the table for our anniversary meal.”

An ecumenical celebration
As with the sisters of St. Margaret, ecumenism figured prominently in services in the Diocese of Chicago, where the choirs of Grace Episcopal and First Lutheran Church in Freeport collaborated on a Feb. 2 multigenerational celebration, said Steve McMillen, Grace’s music director and organist.

“This is a new innovation,” McMillen said during a recent telephone interview from his home. “Nobody can remember that they’ve ever had a Candlemas service in church in the last 20 years.”

Their hybrid Evening Prayer/Lessons and Carols service commemorated both the presentation of Jesus in the temple and Simeon’s song celebrating Jesus as a light for revelation, a basis for the blessing and distribution of candles, McMillen said.

After a meal and an educational program about the meaning of Candlemas, youth and adult participants made candles using beeswax sheets and wicks to be blessed and taken home, he said.

It was “a neat chance to do something different” and to celebrate in the local context the full communion relationship between the Episcopal Church and Evangelical Lutheran Church in America, he added.

During the Los Angeles service Lulú Hernandez shared that she grew up in Mexico, watching her grandmother invest a great deal of love and creativity while sewing clothes for the baby Jesus “during the month of January so that it would be ready for presentation at the church on Feb. 2.”

“I was always proud to take our niño dios to church for the presentation every Feb. 2,” she said in Spanish. “I always thought our niños dios was the most beautiful in the whole community.

“The truth is that I didn’t understand much about Candlemas at that time; but I knew that it had something to do with the end of the 40 days Mary, the mother of Jesus, had to stay home after Jesus was born,” she said, referring to the ritual of Mary’s purification after childbirth that also is observed at Candlemas.

“I knew about the 40 days because after my little brother was born, my mom didn’t leave the house for 40 days. I remember that one of her first outings was to the church to thank God for her baby. The priest raised my brother at the altar to present him to God. I figured something like this was the way Jesus was presented in the temple centuries ago.”

Elaine Sands narrated a story from Ireland about how Candlemas evolved from the celebration of the festival of Brigid, “the Great Mother Goddess, the goddess of fire, poetry and healing … all things that go along with the creative powers of the onset of spring.”

The festival also is known as “Imbolc,” Gaelic word for “ewe-milk … because this is the time of year when lambs were born in Ireland, so of course it is also when the mother ewes’ milk starts to flow again in order to feed them,” she said.

Eventually, the church adapted the festival, transformed Brigid “from goddess to saint, and the name of the festival changed from Imbolc to Candlemas,” she said. One custom was to celebrate Candlemas by filling a basket with soft grass and flower petals to make a “bride’s bed.” And children made corn dolls to lay in the bed.

The custom was, when the bed was ready, that “all the generations of women in the family opened the front door of the house and invited Brigid to enter,” she said.

For Sofía Gonzalez, “the pride of my people is that our festival was started after the Virgin herself appeared in 1392 in my hometown called Candelaria in the Canary Islands of Spain.”

“The celebration lasted a whole week, culminating on Feb. 2,” she said. Before moving to the United States, she recalled, her hometown’s parades included “clowns dressed as peasants pushing artificial wooden bulls, complete with horns, while bullfighters dressed in colorful silk pants with strings attached and paper flowers acted out ‘bullfights’ along the route. There were also bands playing music and … all civil and military authorities of the city dressed in full dress.”

The parade ended at the Basilica of Candelaria, where worshipers placed candles at the altar and shared Eucharist before processing to the plaza to celebrate. “My parents let me drink some sangria, symbolizing the blood of the bull.”

Now, living in the United States, she added, “I miss these parts of my culture.”