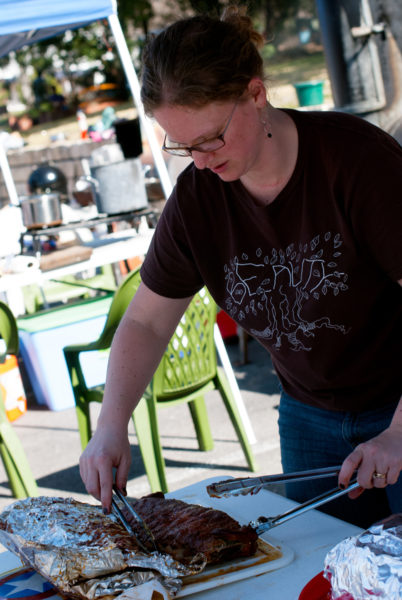 [Episcopal News Service] Dioceses, churches and organizations united on Feb. 2 at the Episcopal Seminary of the Southwest in Austin, Texas to cook some meat and raise money for Episcopal Relief & Development.

Thirteen teams came together and started preparing their meat and secret ingredients the night before. A special Compline service was also held in All Saints’ chapel as teams arrived with large grills, special light towers and camping chairs.

The event brought hundreds of individuals to the seminary grounds to taste each team’s barbecue and give to a worthwhile cause. Children enjoyed chasing animals around in the petting zoo, bouncing in the jump castle and baking cupcakes to sell. Individuals sampled ribs and brisket and voted on their favorites. A magnificent band made up of three Episcopal priests came together to highlight the event with music and extra prayers for any trash talking.

Local Texas judges with esteemed barbecue palates judged the teams’ meats late in the afternoon. The winner for “Best Brisket” was the Smokin’ Trolls from Tulsa, Oklahoma. The winner for “Best Ribs” was the Longhorn Cookers from Austin. Both teams received a coveted trophy with a large black smoker grill crowning the top. The crowd favorite for “Best Overall” was the Diocese of West Texas.

In all, the first annual “Smokin’ for Mission” raised more than $3,000 for Episcopal Relief & Development.

“Episcopal Relief & Development is living and sharing the Gospel all around the world all the time,” said Perry Mullins, a middler Master of Divinity student from the Diocese of Dallas. “We are thrilled to have an opportunity, through barbecue, to join with them and to make their voice known at Seminary of the Southwest, in Austin, and beyond.”

The students who serve on the seminary Episcopal Relief & Development committee said they wanted a new way to raise money and what better way than smoking some meat and bringing the local neighborhood together. They planned the barbecue for February in hopes that Texas would have a warm winter. With a high of 79 degrees during the event, it was a perfect day for grilling with short-sleeve shirts and flip flops. 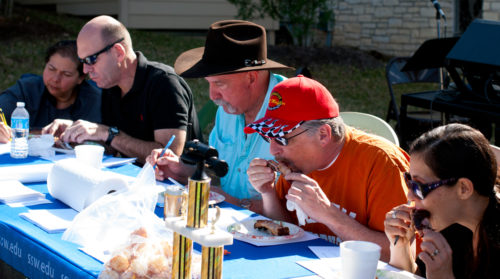 A challenge was even made from the team that pulled their rig from Oklahoma, to have a seminary team compete in the Oklahoma barbecue state competition. The challenge came with a donation of $500 to Episcopal Relief & Development.

“I’m so pleased to be a part of a community that cares deeply about the ministry of Episcopal Relief & Development,” said Christian Baron, a middler MDiv student from the Diocese of Western Michigan. “I have been overwhelmed by the support that the Seminary of the Southwest has given this event. It has been great to see various dioceses and home parishes sponsor their seminarians.”