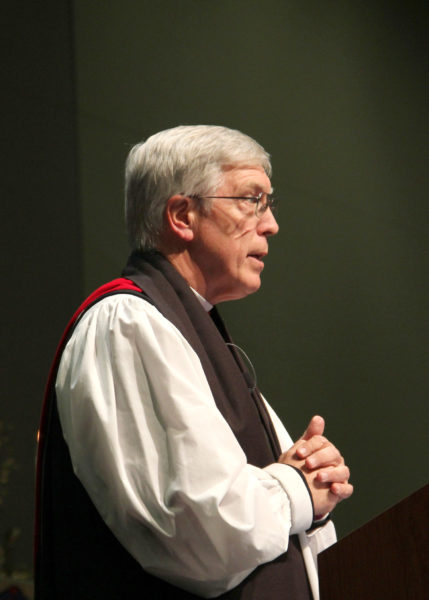 Bishop Duncan Gray addresses the Annual Council of the Episcopal Diocese of Mississippi on Feb. 2 in Jackson. Photo: Jim Carrington

[Episcopal Diocese of Mississippi] In his annual address to the 186th Annual Council in Jackson, Diocese of Mississippi Bishop Duncan Gray III announced a process that can used by parishes and missions which can lead to an authorization by the bishop to allow clergy to perform a liturgy of same-sex blessings until the next General Convention of the Episcopal Church in 2015.

By canon, priests have the authority of all matters of worship in their own congregation, but due to the “sensitive nature of this decision, I am simply requiring serious and prayerful consultation with the lay leadership of the congregation,” said Gray to the delegates, alternates and clergy gathered at the opening service of council at the Jackson Convention Center Complex.

Citing the Episcopal Church’s Standing Commission on Liturgy and Music declaration that the blessing is not marriage, Gray reiterated that this liturgy for blessing is not a sacrament of marriage. “I will take the Standing Liturgical Commission at its word.  The State of Mississippi will not authorize such a rite and my own conscience would not accept it [if it were a marriage],” said Gray.

Gray further stated that “no priest, no vestry, no congregation will be asked to do anything that violates their conscience.”

In order for a congregation to receive an exception to the ban on the blessing of same-sex couples, a congregation must petition the bishop and certify in that request four areas of process that were undertaken by the clergy and lay leadership.

At the completion of the process a congregation may do one of three things: nothing; differentiate themselves from the decision with a statement; or petition the bishop to lift the ban.

Gray said he has formed a small task force to work with him on questions and issues that may arise during a congregation’s processing of a petition.

In acknowledgement of the seriousness of his position change (Gray voted against the trial use of the liturgy for the blessing of same-sex relationships at General Convention while all Mississippi deputies voted for the authorization), Gray said: “I am well aware of the extraordinary diversity of emotion that this decision will evoke. This announcement will delight some of you. For others this will be experienced as horror and betrayal. I recognize both realities. . . For those who feel betrayed, I will accept your anger. I trust that I have earned your respect over 13 years and that we can find ways to talk and move forward.”

Gray also said that he chose to implement this change in policy “so that deep emotions that this action evokes can be borne by me, [the] one who has walked with you through so much over these last 13 years — and not by someone who must address it at the outset of his or her new ministry with you,” Gray said referring to his announced retirement in 2015 and the calling of a bishop coadjutor who will take Gray’s place.

Gray referred to St. Paul’s metaphor of seeing through a glass darkly as we attempt to ascertain God’s truth. “Each of us has distorted perceptions of truth, and we need one another — our unique gifts, our unique perspectives — to give us a fuller, but always imperfect, vision of God’s truth and God’s purposes.