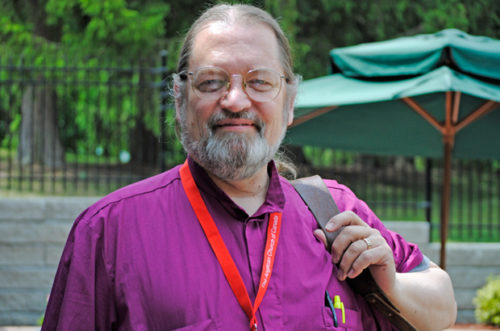 Created to mark the 2012 celebrations of the 60th anniversary of Her Majesty Queen Elizabeth’s accession to the throne as Queen of Canada, the medal honors Canadians who have made significant contributions and achievements to the country.

MacDonald is being recognized for his “spiritual leadership while serving Aboriginal communities and his contributions to environmental awareness of Canadians,” said New Democratic Party Member of Parliament Craig Scott (Toronto-Danforth), who nominated MacDonald. MacDonald will join 29 other community leaders who will be awarded the medal by Scott. Each Member of Parliament was given 30 medals to present to outstanding constituents in their communities.

“I am very blessed and surprised to receive this honor and very grateful to Craig Scott for his nomination,” said MacDonald in an interview. “It means a lot at a number of levels to me, some very personal, but, most importantly, recognizes and honors the vision of the elders for the future of the People of the Land.”

MacDonald was nominated “for his unique role of leadership on behalf of First Nations and Inuit communities in their work towards reconciliation with, and self-governance within the Anglican Church and Canada itself,” added an announcement from the national church’s indigenous ministries department.

He has also been “reminding all Canadians of the unique historical relationship colonizers and First Nations forged and must again work together to find the path to a promising future for generations of Canadians to come,” the announcement stated.

MacDonald was appointed the Anglican Church of Canada’s first national indigenous bishop in 2007, described by then primate, Archbishop Andrew Hutchison, as a “historic moment” in the life of the church and the country. His position was also described as “a rarity in Anglican tradition” — a bishop who is pastor to a group of people irrespective of where they live, rather than to residents of a geographic diocese. In Canada, only the Bishop Ordinary to the Armed Forces is in a parallel position.

Prior to his appointment, MacDonald served as bishop of the U.S. diocese of Alaska, and assisting bishop of Navajoland Area Mission with the U.S.-based Episcopal Church.

Before his ordination to the episcopate, he was canon missioner for training in the Diocese of Minnesota and vicar of St. Antipas’ Church, Redby, and St. John-in-the-Wilderness Church, Red Lake, Red Lake Nation.

He has served on the board of the Indigenous Theological Training Institute; the faculty of Leadership Academy for New Directions; and as a trustee of the Charles Cook Theological School in Tempe, Arizona.

A non-status Indian, MacDonald has native ancestry through both his mother and his father, and said he grew up among the Ojibway people.

Born in 1954 to Blake and Sue Nell MacDonald, he has a Bachelor of Arts degree in religious studies and psychology from the College of St. Scholastica in Duluth, Minnesota, a master’s degree in divinity from Wycliffe College in Toronto and has completed post-graduate work at Luther-Northwestern Theological Seminary in Minneapolis.

He and his wife, Virginia Sha Lynn, have three children: Rose May Li, Brenna Li and Adrian Blake.