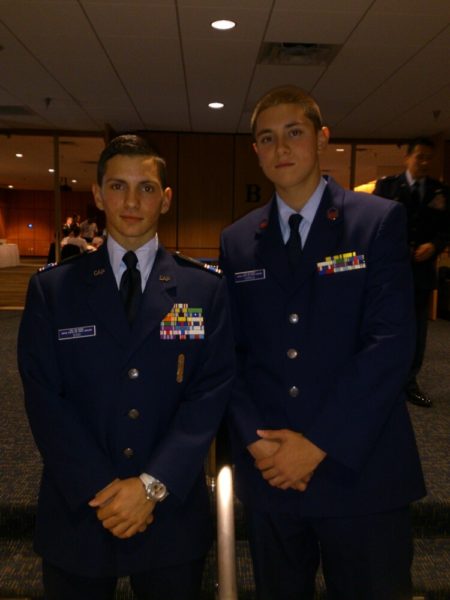 Glenn Camilo, right, shown here with his best friend David Dovi, was one of two teens from the Episcopal Diocese of Southeast Florida to attend the Jan. 21 presidential inauguration as part of a high school leadership conference.

[Episcopal News Service] A Miami native of Jamaican descent, 14-year-old Kerliee Neita says she’s never felt held back because of her race, but hearing the second inaugural address of President Barack Obama, whose father was Kenyan, made her think about it.

“Hearing the president speak and everything … the way they were criticizing him before, it could have happened to me,” Neita, one of two Episcopal Diocese of Southeast Florida members to attend the High School Presidential Inaugural Conference, said in a Jan. 23 telephone interview from Washington, D.C.

“It kind of spoke to me,” she said. “It really inspired me to keep pushing myself. Even though you get bumps in the road or obstacles, you just have to go over them and around them and keep pushing yourself and never let your skin color get in the way of anything. … It’s not just your skin; it’s who you are as a person in general.”

Neita, a member of St. Matthew the Apostle Church in Miami, and Glenn Camilo, a member of St. Nicholas in Pompano Beach, attended the five-day conference, open to alumni of several youth leadership programs.

About 1,900 young scholars participated, divided into four “presidential” groups – his was Washington – and then subdivided into teams of 25 students, said Camilo, who turns 16 on Feb. 3. They attended classes about the presidential campaign process and the roles of the president, cabinet and the press. They heard keynote speeches by Condoleeza Rice, secretary of state and national security adviser to former President George W. Bush, and Gen. Wesley Clark, former NATO supreme commander.

And on Jan. 21 they rose at about 4 a.m. for breakfast, an exclusive tour of the Smithsonian Air and Space Museum and reserved seats on the national mall to watch the inauguration.

“I enjoyed hearing the speech. It was my first time actually seeing the president,” said Camilo in a telephone interview after returning to Florida. “I think it was very special how it also occurred on the observation of Martin Luther King Day.”

Throughout the conference, the scholars learned about leadership skills, said Neita, an aspiring pediatrician, adding that there were “great life lessons” in the keynote addresses.

“Gen. Clark’s main point was to never give up,” said Camilo, who was among the scholars chosen to be photographed with Clark. “It was a really motivational speech. I had a great time meeting him.”

For the two Southern teens, one of the most memorable parts of the trip was the cold.

“I’ve never felt that cold before,” said Camilo, who was born in Puerto Rico and also is part Cuban. “To me, anything under 70 [degrees] is cold.”

“When I say I’m really not used to this cold weather, I’m really not kidding,” Neita said. “I am freezing. I think right now it’s maybe 17 [degrees]. In Florida, it’s probably like 80 degrees.”

She did try to come prepared. She even met another Miami conference attendee while shopping for winter wear at a Florida mall. “Finding a winter coat in Miami,” she added, “is like finding a needle in a haystack.”

He sees his career goals connecting to his faith. “By serving my country, I’m also defending my family as well, and the people I love and the people in my community … I feel like I’m doing good to others … and that I’m protecting them.”

Being involved with the church “keeps you grounded,” she said. “You can be the best person you can possibly be. That’s how God wants us to be.”

With support from her church, Neita attended the conference with her mother, stepfather and 17-year-old sister. She took home the message that she should be “an actual leader,” not a follower, she said. “Always say what you think you know is right. Don’t just agree with someone. You have to have some peace of mind.”

Attending the inauguration, Camilo said, “was a great experience. It’ll be very hard to top an experience like that. I saw history in the making.”