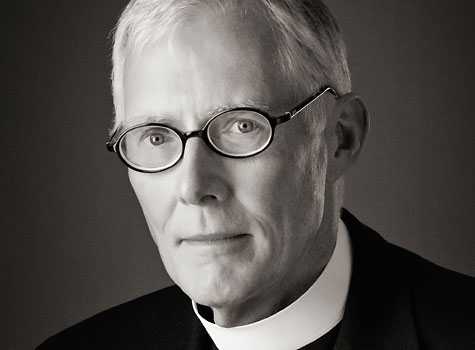 [Episcopal News Service] The Very Rev. Gary Hall, dean of Washington National Cathedral, was among those who joined Sen. Dianne Feinstein (D-California) on Capitol Hill Jan. 24 as she announced the introduction of a bill to renew the U.S. ban on assault weapons.

Hall, who was the first person to speak after Feinstein began the press conference at the Dirksen Senate Office Building, said he has spoken in the pulpit, in the media, with fellow faith leaders and “people in my own church” against gun violence.

“Now we have come to the end of the preaching part of our work and we are moving forward with a tangible solution to the epidemic today as we stand with Senator Feinstein and her Congressional colleagues as they introduce this assault weapons ban,” he said.

Hall said people of faith have a “moral obligation” to stand with and for the victims of gun violence and work to end it.

“Everyone in this city seems to live in terror of the gun lobby,” Hall said, “but I believe that the gun lobby is no match for the cross lobby, especially when we stand together as people of all faiths across the religious landscape of America.”

“I don’t want to take away someone’s hunting rifle but I can longer justify a society that allows people other than military and police to own weapons like these,” he said, pointing to a display of weapons that would be banned under the proposed bill, “or permits the sale of high-capacity magazines designed with the purpose of simply killing as many people as possible.”

Hall called the particulars of the Assault Weapon Ban of 2013 a set of “consensual, middle-of-the-road, common-sense legal actions.”

He then led the press conference in prayer, asking in part that God give compassion, vision, courage and wisdom to U.S. leaders and citizens. He noted that God had given humans “hearts with which to feel the pain of others and minds to create solutions for human suffering.”

Feinstein then described her bill, saying she was “incensed” that gun massacres are happening again and again, perpetrated by “grievance killers,” gang members and those who are mentally unstable or ill.

“The common thread in these shootings is that each gunman used a semi-automatic assault weapon or large-capacity ammunition magazines,” she said.

Such equipment has one original purpose: to kill many people in close-combat military settings, she said. Since the last assault-weapons ban expired in 2004, more than 350 people have been killed and more than 450 wounded by such equipment, according to Feinstein.

“We should be outraged at how easy it was for these perpetrators to obtain powerful military-style weapons,” she said.

It also moves from the two-characteristic test in the 1994 Assault Weapons Ban and various state bans to a one-characteristic test, thus making it harder for weapons manufacturers to modify guns to escape the ban, Feinstein said.

Saying the proposed ban will have no effect on hunting and sporting weapons, she noted that it specifically names 2,200 such weapons that would be exempt.

Targeted weapons legally possessed at the time the ban goes into effect would be grandfathered but their possession would be subject to background checks if they are later sold or transferred, she said.

“No weapon is taken from anyone,” Feinstein said. “The purpose is to dry up the supply over time.”

Rep. Carolyn McCarthy (D-New York), who will take the lead on the bill in the House of Representatives, told the press conference that the fight against gun violence has been a “very lonely battle for many years.”

McCarthy was elected to Congress in 1997, four years after her husband, Dennis, was killed and her son, Kevin, severely injured on a Long Island Rail Road commuter train when Colin Ferguson opened fire on passengers.

“I’ve watched the slaughter of so many people and met with so many victims over the years and in Congress nobody wanted to touch the issue,” she said.

However, she said “something happened” after Adam Lanza fatally shot 20 children and six adults on Dec. 14 at Sandy Hook Elementary School in Newtown, Connecticut. There is renewed attention and intention to end gun violence, McCarthy said, but she added that 1,000 people have died from gunshots in the U.S. since that day.

She said the assault-weapons ban has to be “only the beginning” of what she called a holistic approach. Young people must be helped to avoid drugs and to deal with their psychological problems “so they don’t feel they have to take a gun to kill themselves or take down some of their classmates,” McCarthy said.