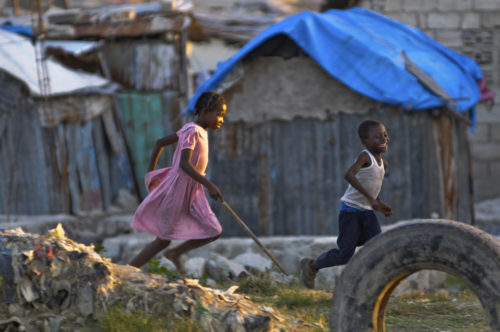 Children play in a slum in Port-au-Prince, Haiti in late December. Many Haitians are still living in tent cities three years are a major earthquake devastated the capital but, there are signs for progress. Photo/Swoan Parker, Reuters

[Episcopal News Service] In minutes, Haiti was forever changed when the 7.0 magnitude earthquake struck on January 12, 2010. Three years later, the devastation is often more visible than the progress that has been made. Nearly 300,000 people lost their lives, hundreds of thousands were injured and the property loss is inconceivable. All of the major institutions in Port-au-Prince were destroyed or damaged, including the National Palace, historic art treasures and Holy Trinity Cathedral, the Episcopal Church’s national cathedral that was constructed in 1929.

Haiti was not without its challenges before the earthquake. Considered the poorest country in the Western Hemisphere, the country suffers from unemployment, extreme poverty and lack of access to basic needs – education, healthcare and food. Add a devastating earthquake to this mix, and the challenges for Haiti seem so overwhelming.

And yet whenever we visit Haiti, we are constantly reminded of the spirit of our brothers and sisters in Haiti and their faith that gives them hope. When visiting Haiti, we often join in worship on Sunday mornings. Recently, we worshipped with St. Peter’s Episcopal Church in Mirebalais on Sunday morning. It was warm and worship began at 8:30 am and lasted over three hours. Worship was filled with heartfelt prayers, choirs of all ages, filling the church with music, a moving sermon and Holy Communion. God was so present in our time together. This faith, this deep conviction is what continues to fill Haitians with hope for a new day.

And now, three years later, there are signs of progress. The reality on the ground is that much has been and is being done. There are new roads connecting communities. Schools have been open in all kinds of structures and new ones are under construction. Health care continues to benefit from Partners in Health’s efforts and a new state of the art 320-bed teaching hospital just opened in Mirebalais located less than 30 miles from Port-au-Prince.

As important as responding to these needs for Haitians, so too is the need to support the spiritual and cultural institution of Haitians. Holy Trinity Cathedral is one of these institutions. It was a primary gathering place for Haitians. Institutions affiliated with the cathedral included a primary and secondary school, a convent and a music school which housed the country’s only philharmonic orchestra. Holy Trinity Cathedral had housed what was believed to be the largest organ in the Caribbean and the murals throughout the cathedral depicted biblical stories in Haitian motifs. They were created by some of Haiti’s most famous artists in the 1950s.
After the earthquake, rebuilding this institution was of significant importance to Haitians of all faiths. And the Episcopal Church committed itself to supporting this effort. Recently, the Episcopal Church and the Diocese of Haiti announced the selection of Kerns Group Architects of Arlington, Virginia, as the architect selected to design the new cathedral. The new cathedral will incorporate the three surviving murals.

Haitians are eager to move beyond the tent cities that have stayed far too long. They are eager to rebuild their country through sustainable ways. And as much as we need to provide access to clean water and food, we also need to continue to look beyond the immediate horizon to more permanent development in Haiti.

For Haiti, it will take years to recover from both the emotional and physical turmoil of the earthquake.  But today, as we reflect on the last three years, we give God thanks for the endurance and resilience of the people of Haiti. We are inspired by their ability to be spirit filled despite the daily challenges.

The Rev. Joseph Murrenz Constant, a Haitian American, and the Rev. Dr. Rosemari G. Sullivan serve as special coordinators for the work of the Episcopal Church in Haiti. They facilitate the multiple efforts among Episcopal congregations, dioceses, networks and organizations committed to the rebuilding of the Diocese of Haiti. Constant is also the director of ethnic ministries and student life at Virginia Theological Seminary. Prior to her work in Haiti, Sullivan served as secretary of the General Convention and as rector of congregations in Washington, D.C. and Alexandria, Virginia.