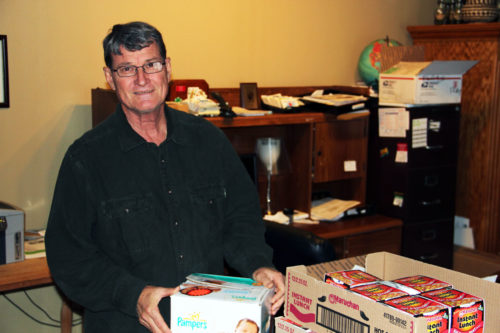 [The Church News, Blanco, Texas] Several weeks before Christmas it was sausage-making season at the Fojtasek household.

At his home in the Texas Hill Country, Bill Fojtasek was baking “tons of cookies and brownies” and preparing pounds of dried deer sausage “marinated in my special homemade recipe,” he said.

Then he packed the goodies and shipped them to the other side of the world: Afghanistan.

Ever since his son, Brandon, served in Iraq, Fojtasek has been on a mission to send care packages to servicemen and women overseas. He wants them to know they’re not forgotten and that folks back home are grateful for their service.

“They’re happy to get what I send,” said Fojtasek, a member of St. Michael and All Angels Episcopal Church in Blanco. “It’s a great morale builder. And they like knowing that people appreciate what they’re doing and their job is not in vain.”

Fojtasek’s endeavor began when Brandon was deployed to Iraq with the Marine Corps. He had enlisted one month before Sept. 11, 2001 and served in the infantry during the Iraqi invasion.

Fojtasek credits his mother with the idea of sending his son special treats: “Every time I went away to school, mama gave me a care package. So I know how much it means to receive something from home.”

Brandon Fojtasek got packages of jerky, deer sausage, homemade pickles and even a miniature barbecue barrel. He and his Marine buddies grilled hamburgers on it.

After Brandon returned home, Fojtasek wanted to continue sending packages to other Marines. But getting their names was another matter. He asked local Marine recruiters for contacts but they were reluctant to help without permission from family members.

Fojtasek’s persistence finally paid off when he obtained the name of one Marine. He sent the Marine a package, and when that Marine left, he gave Fojtasek the name of his replacement.  From there, it snowballed as more Marines and Army soldiers spread the word about the availability of care packages.

This Christmas, Fojtasek was shipping several dozen care packages stuffed with his homemade sausage, cookies and brownies. But he was also including treats made by St. Michael’s Episcopal Church Women (ECW).

“When we visited with Bill during a pot luck lunch this summer, we learned and were amazed at the commitment he had made to send comfort parcels to the troops,” said Betty McNallen, president of St. Michael’s ECW. “The more I talked with him and learned how and what he was sending, the more I became convinced that we needed to become a part of it.”

On a Sunday in November, Fojtasek brought armloads of Christmas tins for the ECW to pack with Snickerdoodles and brownies. Church members also took the name of a serviceman and wrote them Christmas cards so that they would get their own piece of mail in the goodie box.

“We learned from Bill that many of the soldiers do not have much or any family support,” she said.

Fojtasek also provided Christmas cards for school children to sign and write notes. He did the same at the local post office. These are included in the care packages, too.

Although Christmas is a busy shipping time for Fojtasek, he actually sends packages year-round, averaging nearly a hundred boxes a year.

“Their food is so bland that they crave anything with flavor and salt to replenish their bodies,” he said. “They even drink the vinegar in the pickle jars.”

Initially, Fojtasek paid for the food and postage out of his own pocket. Over the years, he’s shipped nearly 400 boxes and has spent more than $4,600 on postage alone. Each package costs $13.45 to ship.

Although he has not asked for gifts, Fojtasek’s work has caught the attention of others. St. Michael’s, the ECW, individual members and others in the community have supported his work.  “Everything given to me has been through their own kindness,” he said.

Fojtasek has established a separate “care package” account at Blanco National Bank named “We Care for the Troops.”

As if the packages weren’t enough, Fojtasek has embarked on another project for the troops:  He sends to Texas Marines state flags that have flown over the capitol in Austin.

He’s shipped more than four dozen so far and proudly shows photographs of Marines displaying the flags at outposts in Afghanistan.

Fojtasek said he takes seriously the biblical message that it’s better to give than to receive. He calls the troops “my adopted sons. If they’re my adopted sons, I try to make it as easy on them as I can.”

“I’ve lost some Marines,” he said. “It’s always sad to get that letter but overall I’ve been very, very lucky” to have lost only a few.

One recipient of a care package has even visited him in Blanco. Fojtasek extends an invitation for others to stop by. “We’ll have some homemade barbecue and a beer,” he said.

— Mike Patterson is a freelance writer, frequent contributor to The Church News and member of St. Michael and All Angels Episcopal Church in Blanco, Texas.