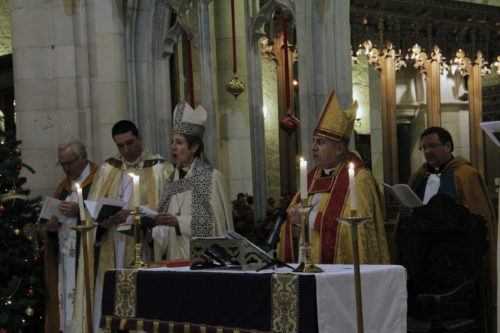 [Episcopal News Service – Jerusalem] “A child is born, a prince of peace who will establish justice, here and around this earth. He will be guide and counselor, a ruler to lead us in paths of peace, who will break down walls and make the path straight,” said Presiding Bishop Katharine Jefferts Schori in her Christmas Eve sermon.

“The prophet promises a prince of peace who will burn all the combat boots and bloodied uniforms, stoking a fire to light the way toward justice and peace.”

The presiding bishop preached during Midnight Mass at the Cathedral Church of St. George the Martyr in Jerusalem; Anglican Bishop in Jerusalem Suheil S. Dawani presided over the Dec. 24 service attended by more than 150 people. The Very Rev. Hosam Naoum, dean of the cathedral, and Bishop James Magness, the Episcopal Church’s bishop suffragan for federal ministries, were among those assisting. [The full text of the sermon is available here. A video follows.]

Earlier, Jefferts Schori and Dawani attended Lessons and Carols services both at the YMCA Field of the Shepherds in Beit Sahour and the Church of the Nativity in Bethlehem, both in territories under control of the Palestinian Authority. The service in Bethlehem was attended in part by Palestinian President Mahmoud Abbas and Prime Minister Salam Fayyad. 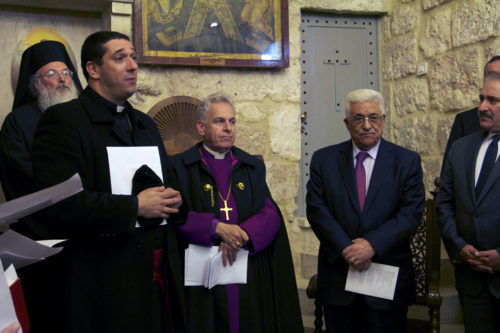 The Very Rev. Hosam Naoum, dean of the St. George’s Cathedral, Anglican Bishop in Jerusalem Suheil S. Dawani and Palestinian Authority President Mahmoud Abbas during a service of Lessons and Carols at the Church of the Nativity in Bethlehem on Dec. 24. ENS Photo/Lynette Wilson

The world the prophet promised, one of peace and justice, “still feels a long way off,” the presiding bishop told the Midnight Mass congregation at St. George’s Cathedral, a center of global pilgrimage and home to two congregations: the indigenous Palestinian Anglicans, often called the “Living Stones,” and a community of expatriate English-speaking members.

“More than 2000 years later we are still waiting and hoping and yearning for that light to banish the darkness once and for all, and deliver us from the long night. We gather on this night to celebrate the kindling of that light in human flesh – in the birth of the Holy One among us,” she said. “We are here to remember and discover again the light that burns bright in the darkness, a light the darkness did not put out – not in this land so many years ago, nor through the years since. The darkness did not prevail; it will not and cannot overcome the light of Christ. The light continues to burn through trials and migrations, wars and plagues, political machinations and death. The light is here this night, burning still in human hearts set ablaze by God.

“The Holy One comes among us in light and darkness, when we are most in need and despair, as well as in rejoicing. God is here, Emmanuel,” she said.

In his Christmas message delivered at the Church of the Nativity earlier in the day, Dawani expressed his hope for an end to the Israeli-Palestinian conflict and for an agreement of a two-state solution in which a secure and universally recognized state of Israel lives alongside a free, viable, and secure state for the Palestinian people, with a shared Jerusalem as the capital of both. He said that he hopes for a time when all people can live life in fullness. As it is now, he said, those who live in fullness have locked the doors on the others.

“Such a system plunges all of us into darkness,” Dawani said. “All of us are deserving of peace and justice … to sit in the shade of our own dreams.”

Matthew Gould, the British Ambassador to Israel, and Sir Vincent Fean, the British Consul General in Jerusalem, also attended the service at the Church of the Nativity, with Fean reading the first lesson, Isaiah 9: 2; 6–7. The Greek Orthodox Archbishop of Jordan, whose seat is in Bethlehem, hosted the Anglican service at St. George’s Orthodox Chapel. And Jordan’s foreign minister also attended part of the service.

The Church of the Nativity is located in an area previously controlled by Jordan, which has historically played a role in protecting holy sites; the Palestinian president annually attends services on Christmas Eve at the church to express support for the Christian community, explained the Rev. Yazid Said, a Palestinian Anglican priest and scholar in residence at Tantur Ecumenical Institute in Jerusalem.

Thousands of pilgrims from around the world gathered in Manger Square outside the Church of the Nativity in a festival atmosphere of lights, music and other entertainment, in advance of Midnight Mass. 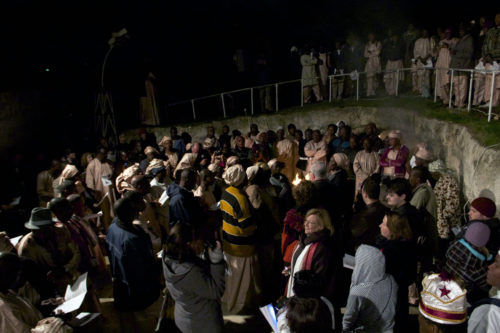 An outdoor service of Lessons and Carols at the YMCA Field of the Shepherds in Beit Sahour, West Bank, drew close to 250 people, including some 150 Nigerian Christians. ENS Photo/Lynette Wilson

In the West Bank’s Beit Sehour, in early evening, the outdoor service of Lessons and Carols drew close to 250 people, including some 150 Nigerian Christians.

“Coming here to Shepherds Fields we have placed ourselves within the content and concept of St. Luke’s Gospel reading. We are perhaps as close as physically possible to the original location Luke speaks about, and this setting helps us to soak in what happened here more than 2,000 years ago when Mary gave birth to Jesus Christ,“ said Dawani in his service.

Jeffers Schori read Luke 2:8-14 and Magness participated in the prayers.

The presiding bishop is visiting Israel and the Palestinian Territories at the invitation of Dawani. She is accompanied by Magness, with whom she visited U.S. Navy personnel stationed in Italy prior to arriving in Israel.

At the beginning of his Christmas Day sermon at St. George’s Cathedral, Dawani welcomed the presiding bishop and explained to the congregation that the Episcopal Diocese of Jerusalem and the U.S.-based Episcopal Church have had a long and important relationship. He thanked the Episcopal Church for its “steadfast” and “generous” support.

Then he reminded those present of their proximity, just a few miles from where Jesus was born, and that the incarnation is consistent with mankind’s need for liberation.

“The Christ child born in Bethlehem, we are with him and in him we are the holy people and we stand on holy ground,” he said.

“The Holy Land can and must be a model for peace and justice in the whole world,” said Dawani.