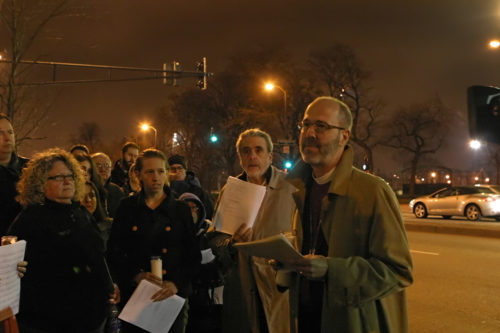 [Episcopal News Service] Three hundred people gathered at First Baptist Congregational Church on Chicago’s west side Dec. 17 to pray for silent nights unbroken by gunfire in a city that has in recent years seen an increase in gun-related violence disproportionately affecting youth.

Organized by CROSSwalk, the interfaith “Silent Nights” vigil and service blended readings and songs with meditations on themes of peace. Following the service, participants processed to the steps of the church to sing the hymn “Silent Night” and to receive candles to take to the members of their faith communities.

CROSSwalk began earlier this year as a 1,500-person Holy Week procession to remember some 635 young people who have been murdered in Chicago since 2008. So far this year more than 150 children and youth have been killed by gun violence in Chicago, with total gun-related deaths at more than 500.

“It [CROSSwalk] has grown into a point of connection for anguished communities and a new force for youth programming and funding,” said Chicago Bishop Jeffrey Lee, in a press release.

A strong supporter, the Episcopal Diocese of Chicago is one of 50 partners working with CROSSwalk to engage people of faith in addressing the violence against young people.

On Dec. 12, two days before a gunman killed 26 people, including 20 children, in Newtown, Connecticut, Lee spoke against a U.S. Seventh Circuit Court of Appeals’ decision to overturn the Illinois ban on carrying concealed weapons.

“The voices of lobbyists and lawyers threaten to drown out the cries of the children and youth who will bear the brunt of any new law that allows more guns on our streets. We have already lost too many of those children, like 7-year-old Heaven Sutton, who was gunned down at her mother’s candy stand, and 13-year-old Tuyquan Tyler, who bled to death in his mother’s arms,” said Lee.

“The Christian tradition teaches us that violence only breeds more violence and that the only certain antidote to it is the hard and steadfast work of building a just society. As leaders, we will be called upon to answer first for how we protected the most vulnerable people entrusted to our care. We already share the blame of being unable to shield far too many of our young people from violent deaths. Any conceal-carry law that results in more children being gunned down on our streets will only compound our devastating failure.”

The Dec. 14 massacre at Sandy Hook Elementary School in Newtown refocused the national debate on gun control. In the Diocese of Chicago, the debate has been ongoing since 2011.

“The diocese couldn’t be silent anymore about what we’ve been seeing. We had a horrible year with violence, particularly this summer,” said the Rev. Jennifer Baskerville-Burrows, the diocese’s director of networking, in a telephone interview in early December.

Now that Lee has claimed gun violence as a core issue, “there’s a channeling of efforts and resources addressing the recent violence,” Burrows added. 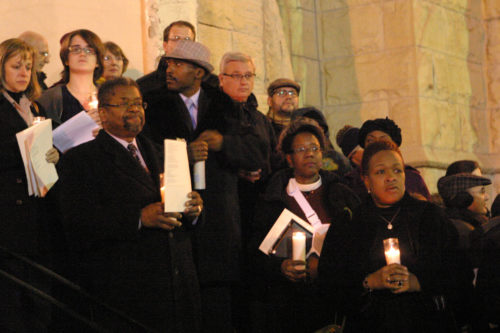 “Silent Nights” was part of a larger effort to stop gun violence. On Nov. 11, the diocese organized a moment of prayer and reflection,“Silence the Guns,” to coincide with Armistice Day.

The diocese intended that the two-minute silence that has been observed for almost a century on the 11th hour of the 11th day of the 11th month since the Allied forces and Germany signed the armistice in 1918 would resonate louder than gun fire.

With roots in the Episcopal Church, CROSSwalk has become the catalyst for forging new and stronger relationships with other faith communities to battle the violence.

The driving force behind “Crosswalk” is its director, Jacqueline “Jack” Clark, 28, a Chicago native and former seminarian at All Saints Church.

“A lot of the events we’re having are about community building,” said Clark, in a telephone interview.

CROSSwalk and its community and faith-based partners are working to create programs that give children and teens alternatives to an environment of gangs and crime.

“Having formed relations with those mothers who have lost children, and with people in communities who are struggling under all the weight of this loss, grief and trauma, I don’t feel like I can walk away from it,” said Clark.

Not all the gun violence is gang-related; domestic abuse, poverty and drug crime contribute to the escalation of violence,” said Clark.

“Someone may have a beef with someone, and with the availability of guns the first reaction is sometimes to shoot, and a lot of innocent folks are caught in the crossfire,” she said.

During an interfaith summit in August, called “Stop the Violence,” also held at First Baptist Congregational Church, civil, police and faith leaders discussed what legislative and faith actions could reduce the violence.

During the gathering, Chicago Police Superintendent Garry McCarthy said said that in Lawndale, one of the west side neighborhoods most affected by violence, the murder rate is three times the citywide rate. Young people are not only the victims of violence, but also the perpetrators, with a small number of young people causing the violence.

Built on a legacy of Episcopal social activism that exists in Chicago, the diocese is creating new coalitions between secular and faith groups to strengthen a movement to disarm violence, said Catherine Thomson, chair of the Peace and Justice Committee.

“I don’t think any one of us can achieve it [ending violence] by ourselves.  It’s all well and good to light candles and have vigils and pray, that’s an element of the process, but people want to be called to action,” said Thomson.

— Mario Villafuerte is a Shreveport, Louisiana-based freelance journalist and a member of St. Mark’s Episcopal Cathedral. Lynette Wilson, editor/reporter for the Episcopal News Service, contributed to this report.