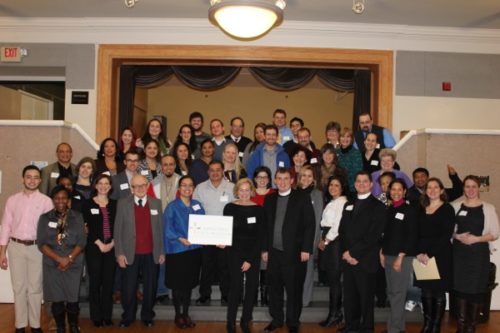 For 36 years, the Burgess Urban Fund (BUF) has supported grassroots community organizing in response to social injustice in Massachusetts and has awarded over $6.5 million in grants. The amounts for this year’s grants also increased with $10,000 being the minimum grant.

“The Burgess Urban Fund was established to improve the lives of the urban poor and oppressed.  We reach out into the wider community and partner with community-based organizations that have the power and capacity to reach into so many neighborhoods.  The fund’s focus areas are: faith-based organizing, immigrants’ rights, workers’ rights, affordable housing, poverty-related organizing and youth/senior organizing.  We are especially excited this year as we were able to increase both the grant size and the number of grantees funded,” said Norm Faramelli, interim executive director, Episcopal City Mission.

“It is evident within Massachusetts and within our own communities, that there is an overwhelming need for organizing and advocacy to right the injustices of many.  This is illustrated by the increasing number of applications we receive every year; this year hit an all-time high of 60 applications with a large number from the workers’ and immigrants’ rights sectors,” said Katie Campbell Simons, associate director community partnerships and public policy.

Burgess Urban Fund grantees must:  engage members of the community to identify shared concerns and create goals for social change; develop new leaders, especially among those

affected by social inequality; undertake projects with concrete goals for the core constituency; articulate both the immediate and root causes of the problem through social change, and collaborate with other organizations, regional and statewide.

The other Massachusetts’-based Burgess Urban Fund grantees are:

“We are honored again to receive the Burgess Urban Fund grant so that we can continue to expand our youth leadership and empowerment program,” said Dan Gelbtuch, Program Director of Dorchester Bay Youth Force. “I think I can speak on behalf of many of today’s recipients. For us, this money is transformational. It will truly help us to promote principles and practices of democracy and advance the political, social and economic standing of Latinos in the Commonwealth,” said Alejandra St. Guillen, executive director, ¿Oiste?

Alexandra Pineros-Shields, Burgess Urban Fund Committee Chair, closed the awards presentation by thanking the grantees for their quest to improve the lives of those in the Commonwealth affected by social injustice.

Incorporated in 1844, ECM seeks to mobilize Episcopal parishes, individuals and resources in partnership with other community organizations for social structural change in Massachusetts, with particular emphasis on the urban poor. ECM does this through support for community organizing, mission-related investments in affordable housing, parish-based community economic development, and public policy advocacy. The Burgess Urban Fund was established in 1976 as a tribute to The Rt. Rev. John Melville Burgess, former Bishop of the Episcopal Diocese of Massachusetts; he specifically wanted a collection of money given to community-based organizations that empowered the poor. In recent years, ECM has invested significant resources in affordable housing, including the expansion of the Morville House in the Fenway, grants to parishes seeking to develop affordable housing in their communities, grants to community organizers promoting affordable housing and the expansion of a network of parishes and people working to end family homelessness in this Commonwealth.  ECM’s mission is to work for the economic wellbeing of the underserved as an expression of God’s grace.