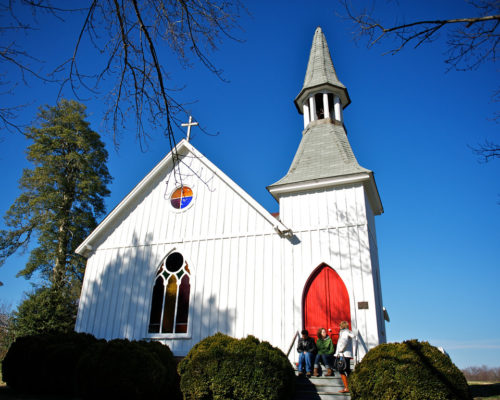 [Episcopal News Service, Chapel Hill, North Carolina] The Episcopal Church of the Advocate‘s new chapel is 112 years older than the congregation itself, and was originally built about 100 miles west of the church’s campus in Chapel Hill, North Carolina. After months of planning and careful moving, the building arrived on the Advocate’s land on Dec. 8. This was no ordinary building drive.

The story of the chapel began in 1891 when St. Philip’s Episcopal Church was built and consecrated in Germanton, North Carolina. A Carpenter Gothic building, St. Philip’s was home to a congregation of some 20 members when it was built, and never grew beyond that size. By the early 1980s, it had no congregation, but was cared for by the Diocese of North Carolina and a committee of local Episcopalians, until just a few years ago. 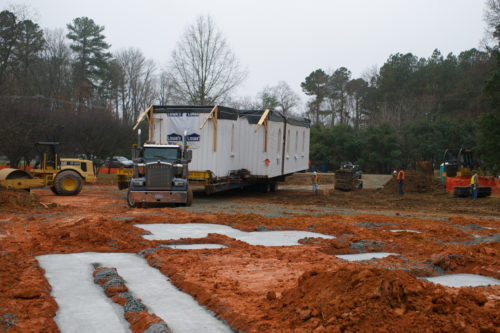 The main section of the chapel prepares to roll on to it’s new footers in Chapel Hill. Photo/Thomas Fisher

After no one stepped forward to tend to the building, in 2011 the diocese decided to sell the property, but hoped to find a way to preserve the chapel. Meanwhile, the Episcopal Church of the Advocate, a mission church established in 2004, was purchasing land in Chapel Hill, and was contemplating building a worship space when the diocese offered the prospect of moving St. Philip’s chapel to the Advocate’s land.

“Support for moving the building reflects joy at the prospect of bringing renewed life and ministry to a building that otherwise was going to lie vacant or be sold altogether,” said the Rev. Brooks Graebner, diocesan historiographer. “Moving the building allows it to continue to serve the sacred purpose for which it was consecrated by Bishop Cheshire in the 1890s.” 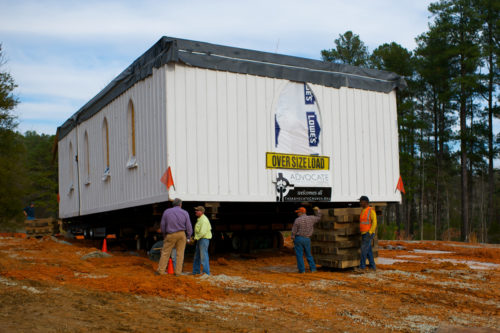 St. Philip’s chapel is in place and awaiting a foundation, which will be constructed underneath it, before the roof and bell tower are reconstructed. Photo/Thomas Fisher

The idea of transporting St. Philip’s at first appeared unrealistic, but due to its heart pine construction and upkeep, the building was sturdy enough for the move, and relocating the chapel turned out to be less expensive than building a new one.

That same sturdy craftsmanship makes St. Philip’s a profoundly beautiful space, said Beth Lassiter, the Advocate’s junior warden. “The beautiful, uneven board and batten, so obviously placed by hand; the wavy bright windows, and the rich acoustics of the room; the tall belltower and clear bell – these are all links to our heritage,” she said. “The space will delight and reinvigorate all of the people who will come to the Advocate in the years ahead.”

Blake Moving Company of Greensboro, North Carolina, carefully disassembled the building – the belltower and roof traveled separately from the main sanctuary – and shepherded it some 126 mainly rural miles over 10 days to the Advocate’s campus, where it will be carefully reconstructed, and outfitted with electricity, plumbing and a heating-cooling system for the first time in its history. 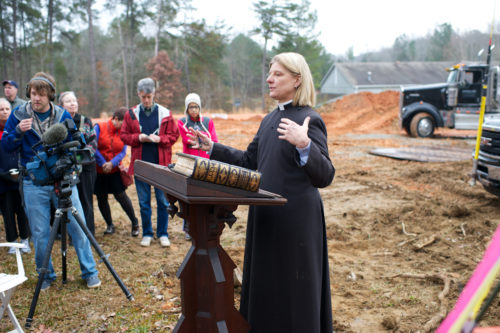 The Rev. Lisa Fischbeck addresses the gathering which celebrated the arrival of St. Philip’s on the Episcopal Church of the Advocate’s campus. Photo/Thomas Fisher

Funds have been raised for the cost of the move, but some $200,000 is still needed to pay for the infrastructure required for the congregation to worship in St. Philip’s. The congegation hopes that work will be completed by next summer, in time for its 10th anniversary in September.

The project appealed to the Advocate’s congregation for several reasons. Breathing new life into an old building fits well with their identity as a “re-traditioning” church. Additionally, relocating St. Philip’s saves a considerable amount of natural resources, compared to building anew.

“The Advocate has a strong commitment to environmental sustainability,” said the Rev. Lisa Fischbeck, vicar. “For us, to be able to preserve a building and adapt it for use in the 21st century is a manifestation of that commitment. We are also a community that takes seriously our roots in this diocese and in the broader Anglican-Episcopal tradition.”

Lassiter agreed, noting that the dynamic interplay of tradition and innovation in the move reflects the Advocate’s mission. “At first it might seem strange that a new, retraditioning church should be so moved by an old space. But I know, very clearly, that it’s a space that suits us. And it is that simplicity and connection to our Episcopal heritage that makes it so perfect,” said Lassiter. “It’s also uniquely Episcopalian, and as such, is a reminder that we are only one generation of a long tradition, very firmly part of something larger than ourselves.”

North Carolina Bishop Michael Curry summed up the impetus behind the diocesan decision to move the building from its original location with a vision of its future.

“St. Philip’s will now participate in writing a new chapter of history,” he said. “Soon the sounds of babies crying and children running through it will be heard. Soon new followers of Jesus will be baptized in that building again. Soon offerings to feed the hungry will be taken up in that building. Soon the urgent needs of the world will be lifted up in prayer in that building. Soon a vibrant congregation composed greatly of young adults committed to following the way of Jesus will worship God there in order that they may leave that place to go into the world to serve and witness in Jesus’ name. And because of all that, a historic building will have a new future, playing a part in God’s work of creating a new future for the human family.”

— Sam Laurent is a member of the vestry of the Episcopal Church of the Advocate, and director of its Center for Theological Engagement.