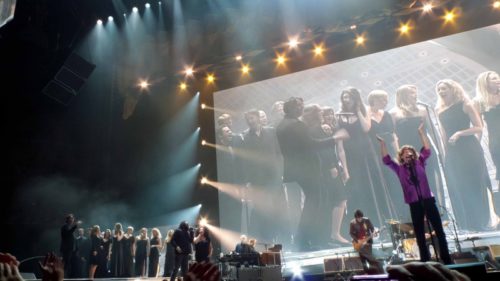 [Trinity Wall Street] The Choir of Trinity Wall Street spent some significant time with rock n’ roll royalty Saturday night, singing the choral part to The Rolling Stones’ iconic secular hymn, “You Can’t Always Get What You Want” at the band’s first 50th anniversary show in the U.S.

The 18,000 fans at the Barclays Center in Brooklyn embraced the choir’s effort – as did Mick Jagger, the Stones’ lead singer. Onstage, he called the singing “beautiful,” and noted that the choir was nominated this week for a 2013 Grammy award.

The choir will perform again with the Rolling Stones at their Prudential Center shows in Newark, New Jersey.

The performance continues a remarkable period for the choir and music at Trinity Wall Street. A Grammy nomination is in hand, two performances of Handel’s Messiah are coming up, as are the remaining performances with the Stones.

“The Rolling Stones chose us to help them celebrate their 50th anniversary,” said Julian Wachner, principal conductor of the Trinity Choir. “We couldn’t be more honored.”