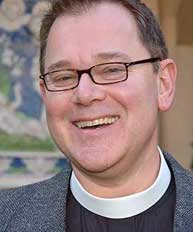 [Episcopal Church Office of Public Affairs] Presiding Bishop Katharine Jefferts Schori and President of the House of Deputies the Rev. Gay Clark Jennings have named the Rev. Canon Michael Barlowe as Executive Officer of General Convention of the Episcopal Church.

“I am humbled and honored to have been appointed as Executive Officer of the General Convention, and am grateful for the confidence placed in me by the Presiding Bishop and the President of the House of Deputies,” Barlowe stated. “In Indianapolis, I was never prouder than when The Episcopal Church concomitantly affirmed our commitment to external mission and internal reform. In effect, we said that with God’s help, we could fly a plane while building it. I believe we can. I love our church, and am blessed to serve as the Executive Officer of the General Convention during such a pivotal time in our history.”

Barlowe will begin his new duties in January 2013.

“Michael Barlowe brings abundant gifts to this ministry, and I am very grateful for his willingness to say ‘yes’ to this call,” commented Presiding Bishop Jefferts Schori. “His skill in management of large staffs and budgets, public and pastoral communication, developing technologies, detail as well as big-picture vision will serve this Church well.  He has experience of a broad reach of The Episcopal Church’s work – across the United States, in multicultural contexts, with Anglican Communion partners and in ecumenical contexts, and with all orders of ministry. I believe we can expect creative responses in this time of rapid transition and unanticipated opportunities.”

“The Executive Officer of General Convention must be a skilled engineer who can tend the machinery of our polity, a wise listener and facilitator, and, once every three years, the master of the Big Top,” commented President Jennings. “I can’t think of anyone better qualified to fill all of these roles than Michael Barlowe. I am delighted that he has accepted this position and I am eager to begin our work together.”

Among the duties of the position are: to serve as Executive Officer for General Convention, and, if elected, as Secretary to Executive Council; to coordinate the work of the Committees, Commissions, Agencies, and Boards (CCABs) that are funded by General Convention; to supervise and manage the General Convention office staff, located at the Church Center in New York City; to participate as a member of the executive oversight group of the churchwide DFMS staff.

Barlowe has served as the Canon to the Ordinary since 2006.  Previously, he was the Congregational Development Officer for the Diocese of California (2002 – 2006).

Barlowe has served as a deputy at six General Conventions and has participated on many committees, commissions, agencies, and boards.   Among his many Episcopal Church activities, he is a representative on the Brazil Bilateral Commission, past editor of The Ecumenical Bulletin, and past chair of the Standing Commission on National Concerns.   He served on the Provincial Synod in three Episcopal Church provinces, was a tutor at General Theological Seminary, and is a coordinator for the Living Stones Partnership for Baptismal Ministry (California/CDSP).

The search committee reviewed the credentials of the 19 applicants for the position.

“We give thanks for the willingness of a number of highly skilled and gifted persons to offer themselves for this work,” the Presiding Bishop said. “This Church is abundantly blessed by the interest of so many to serve in this way.”