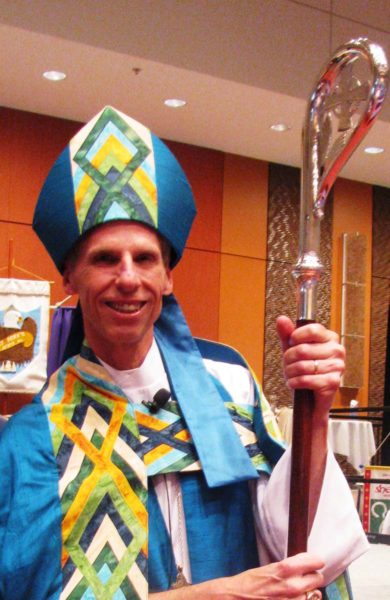 At the time of his election on June 2, Fisher, 57, was serving as rector of Grace Church in Millbrook, New York.

Fisher succeeds the Rt. Rev. Gordon P. Scruton, who has served for the past 16 years as the diocese’s eighth bishop.

“This day is not about one person, but about the whole church,” said Fisher. “The ordination and consecration of a bishop is a deeply meaningful time when we all get to renew the faith that is within us and recommit ourselves to following Jesus in his mission of mercy, compassion and hope. It is a time of celebration and inspiration for all God’s people.”

Preacher was George Forsythe, president of Westminster College in Fulton, Missouri, and a former academic dean at West Point when Fisher was Episcopal chaplain there.

“Today is a time of hope in the bright future for God’s work under Doug’s guiding hand,” said Forsythe in his sermon. “And how fitting it is that on the eve of the Advent season, we look to future things to come; to God’s presence in the world in the incarnation of Jesus the Christ and to the celebration of the truth of God’s infinite love and reconciling grace.”

Special guests included the Rev. Daniel Sarfo, bishop of the Anglican Diocese of Kumasi in Ghana, the sister diocese to the Episcopal Diocese of Western Massachusetts. Sarfo was accompanied by his wife, Mary, and members of his diocese.

The bishop’s vestments were designed by Jeff Wunrow of Jeff Wunrow Designs in St. Louis, Missouri. Brenna Hatcher, a friend of the Fisher family, helped with the design. The fabric consists of an abstract configuration of fish, symbolizing the biblical story of the loaves and the fishes that fed 5,000 people — a symbol of God’s abundant gifts to humankind. The design also plays on the bishop’s surname, Fisher. The ordination took place on the first day of Advent in the church calendar and follows the Feast of St. Andrew, the patron saint of fishermen, on Nov. 30.

Hand-turned, glazed chalices and patens for use in the Eucharist — one for each parish in the diocese — were created by Jaye Pope of Good Dirt Pottery in Montague, Massachusetts. They are also decorated with the vestment fish pattern and were blessed during the ceremony.

Fisher was officially “seated” as bishop at 10 a.m. on Sunday, Dec. 2 in Christ Church Cathedral in Springfield.

Fisher has been rector of Grace Church in Millbrook since September 2000. Prior to that call, he served Holy Innocents Episcopal Church in Highland Falls, New York, and was a chaplain to the U.S. Military Academy at West Point from 1997 to 2000.

He holds a Master of Divinity degree from Immaculate Conception Seminary and a Doctor of Ministry degree from Episcopal Divinity School.

Fisher was ordained a Roman Catholic priest for the Diocese of Rockville Centre in 1980. He left the Roman priesthood and was married in 1984. He was received into the Episcopal Church in June 1997.

The Episcopal Diocese of Western Massachusetts has about 16,650 members in 63 congregations.

— Deborah Johansen Harris is communications director and missioner for the Episcopal Diocese of Western Massachusetts.