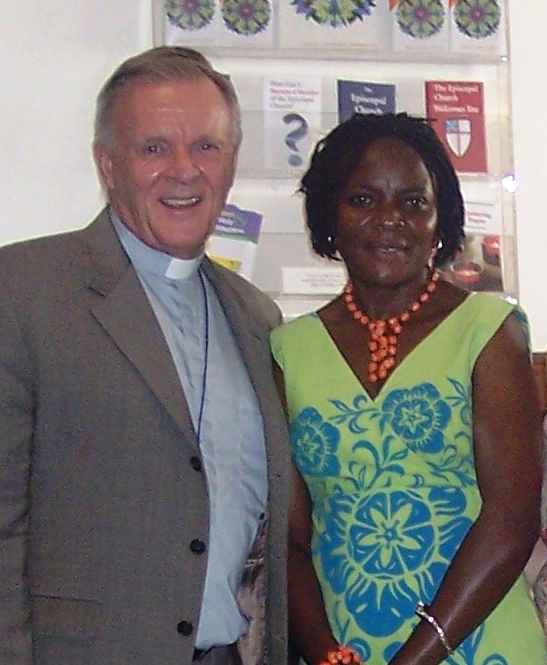 The Rev. Albert Ogle and Maxensia.

[Episcopal News Service] Maxensia, a Ugandan woman living with HIV, relays the story about how her husband became sick and did not tell her he had HIV. He died of AIDS in 1999 and his family wrongly blamed her for the infection and tried to confiscate her home. She nearly went mad worrying about how she could support her four children, she tells the congregation at St. Alban’s Episcopal Church during a trip to Washington, D.C. last July.

A devout Roman Catholic, Maxensia prayed for understanding as to why terrible things were happening to her. Like Job, she found the grace to understand the mysterious ways of divine love. Her adversity opened her heart to compassion and she turned her home in Kampala into a community center for others in the same predicament. She established the Lungunja Health Clinic with volunteer nurses and community workers.

Maxensia is now the women’s leader of the Ugandan Democratic Party and is a rising star in the Roman Catholic Archdiocese of Kampala, which sponsored her to attend a yearlong women’s training program in Ghana and Canada. While she studied remotely, her clinic volunteers expanded the network of 3,000 female home healthcare providers into rural areas of Uganda. When she returned to Uganda, the volunteers had already started constructing an extension to the clinic thanks to Rotary International.

I met Maxensia at the United Nations’ review of the World AIDS Plan in 2011. She spoke from the floor of the U.N. chamber about the issues faced by millions of women worldwide. She spoke with authority; a voice for the voiceless. We later marched outside the U.N. to demand more funding for millions of people living with HIV. For every person treated with antiretroviral drugs, two more are infected. Supplies of the drugs cannot fill the demand. Sadly, we have not yet found agreement on the best methods of prevention.

Maxensia once spoke to a gathering of Ugandan Roman Catholic clergy about the need for married women to practice safe sex with their husbands. (Uganda is a patriarchal society where the parliament has not been able to decide whether rape can happen within marriage.) Condoms are a taboo subject in the Roman Catholic community. Maxensia was dismayed at the silence from the audience when she merely asked, “What can a woman do in situations like mine?” Had her husband used condoms, she would not need to take multiple pills each day in order to live and help others. Her question remains unanswered, but she decided to assist her beloved church with solutions. The Archbishop of Uganda appointed her to a National Evangelism Commission. Maxensia’s voice can now be heard, not only at the U.N., but also in the homes of her clients as she brings medicines and pastoral care.

I visited her center last year and watched as women, some victims of domestic violence, transformed strips of paper into necklaces for American supporters who want the women to be able to feed their own children and orphans. The tiny clinic is a sanctuary. There are no paid employees, only volunteers who go into the community encouraging people to get tested and making sure the sick receive care. All the women make beads together as sisters, ignoring any issues that would divide them.

Maxensia was one of 26 people sponsored by the St. Paul’s Foundation for International Reconciliation to attend an International AIDS Conference last July in Washington, D.C. The Episcopal Diocese of Washington, through the offices of the Rev. Carol Flett, helped us raise funds and place people in parishes where they could tell their stories.

Eleven religious conservative lawmakers on Capitol Hill listened as Macdonald, an Anglican priest with HIV, spoke about rescuing his children when their home was firebombed as a result of his opposition to the criminalization of homosexuality in Malawi, one of the 76 countries where it is illegal to be gay. Macdonald emphasized the need for stigma reduction towards LGBT people and those living with HIV. Today, he is the advisor to President Joyce Banda on non-governmental organizations in Malawi. Many of the churches and parliament still oppose the repeal of anti-gay laws and Macdonald and President Banda are trying to find a way to show them why this major public health issue must be addressed.

Maxensia and Macdonald met with executives at the World Bank about how the bank can reach more stigmatized poor people. They also spoke in churches in D.C. Telling their stories to lawmakers and congregants in Washington has resulted in the exploration of new advocacy and public policy work with St. Paul’s Foundation working closely with Lutherans and other faith communities.

One of our gay delegates was arrested and tortured after returning to Africa and faced opposition from religious zealots over discussing providing services to gay men and sex workers. The Washington community took him in. An expert in HIV care with experience in reaching vulnerable populations, he continues to work remotely.

These three courageous people of faith represent the new faces of AIDS in the 21st century. Faith communities in Africa provide 40 percent of all health services. Maxensia and Macdonald are determined to create welcoming, inclusive communities and are asking for our support because they cannot do it alone. They know the pain and the complexities of life’s journey. We in the global north have much to learn from these great people of faith as we mark another “World AIDS Day.”

You can read more about our common work on the St. Paul Foundation’s website and see how you and your congregation can become yet another face of an inclusive humanity.

— The Rev. Canon Albert Ogle is president of the St. Paul’s Foundation for International Reconciliation at St. Paul’s Cathedral in San Diego. He is co-author of the California War on AIDS 1987-91, the first comprehensive plan for the state. He is the founding executive director of the AIDS Service Center, Pasadena, and worked to establish the Anglican Church of Uganda’s initial AIDS response 1991-1997. He is currently assisting Retired Ugandan Bishop Christopher Senyonjo to establish an AIDS program in Kampala targeting at-risk populations.