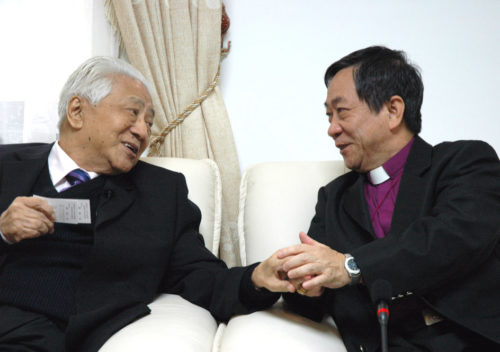 [Episcopal News Service] K. H. Ting, an Anglican bishop prior to China’s Cultural Revolution and a pioneer in the country’s post-denominational era, died on Nov. 22 in Nanjing aged 97.

Ting has been described as “an outstanding patriotic religious leader” and “a well-known social activist.”

The Rev. Canon Winfred B. Vergara, the Episcopal Church’s missioner for Asiamerica Ministries, described Ting as “larger than life in the history of contemporary Christianity in Asia.”

Vergara said that Ting, who he’d met on two trips to China, “will be greatly missed not only by China but by Asia-America and the entire ecumenical world … May he rest in peace and rise in glory.”

Ting was an Anglican bishop in the 1940s and 1950s. He served as mission secretary for the Canadian Student Christian Movement and subsequently studied at New York’s Columbia University and Union Theological Seminary.

After moving back to China in the 1950s, Ting served as chairman of the Three-Self Patriotic Movement of Protestant Churches in China and president of the China Christian Council. He was vice chairman of the Chinese People’s Political Consultative Conference from 1989–2008.

(The China Christian Council and Three-Self Patriotic Movement form the official, government-sanctioned Protestant church in China. [“Three-Self” stands for self-governing, self-supporting and self-propagating.] TSPM serves as a liaison between churches and government, while CCC focuses on church affairs.)

Describing Ting as a “great visionary,” the Rev. Olav Fykse Tveit, secretary general of the World Council of Churches expressed admiration for his commitment to reconciliation between church and society, Christians and non-Christians in China.

Ting worked closely with the leadership of the WCC in its formative years and was a staff member of the World Student Christian Federation in Geneva, Switzerland.

Ting’s contribution to the re-emergence of church life and opening of the church to the outside world in the 1980s and 1990s is widely recognized, a WCC press release said.

With the creation of the China Christian Council, Tveit said, Ting has “contributed immensely to raise the profile of the Chinese church,” and made it possible that the “church in China re-entered into WCC fellowship after four decades of absence in the global ecumenical movement.”

“Bishop Ting played an important role in ensuring that Chinese Christianity continues to survive and grow even under the communist regime,” Tveit added.