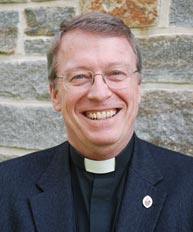 [Episcopal News Service] Years ago, the Rev. Bob Castle came to the Seminary of the Southwest in Austin to give a lecture.  He was not larger than life, nor was he particularly compelling.

To prepare, we had watched what to me was an inspiring documentary about him, “Cousin Bobby,” produced by his cousin Jonathan Demme, who had directed “Silence of the Lambs.” Even so, Castle himself was pretty unassuming.

When I heard about his recent death, I recalled Castle’s impact on Garret Keizer, author of A Dresser of Sycamore Trees, The Finding of a Ministry, a book I often loan to folks who think they may want to enter the priesthood.

Castle picked Keizer, a parishioner and Vermont high school teacher, to take on more ministry in their small Episcopal congregation, asking him to lead adult catechism and preach.  Keizer would later became a lay vicar and eventually a “Canon 9” priest, a locally-trained person ordained to serve a particular parish or ministry. Keizer’s book is as much an homage to his mentor as it is a memoir.

“By watching how Castle tempered insight with tolerance, I began to believe that God’s ability to see through the superficial exterior of a man or woman is not necessarily the same as God’s disapproval of that exterior, however trite or quirky it appears,” he wrote.

Castle’s urban ministry in New Jersey and New York City is well-chronicled by Keizer who describes the marching with Martin Luther King, Jr., opposition to the Vietnam War, protesting the buildup of nuclear weapons in the 1980s, and dumping uncollected garbage in Harlem in front of City Hall in lower Manhattan.  Castle was arrested so many times it was routine for Castle’s kids to ask, “How much is the bail, Mom?”

Demme’s documentary captured Castle talking about how the Harlem community kept complaining about potholes in the streets with no result. When news media arrived to cover a street protest Castle called in, they found him with a table set in a pothole. The news conference began with Holy Eucharist. This was not the first time he’d done something like this.

“He had invited street gang to use the parish gymnasium,” Keizer recounted. “He had staged a summit between two warring gangs, beginning with Holy Communion.”

I suspect there were infuriated Episcopalians in New York City when he protested a service outside the Cathedral of St. John the Divine honoring Gen. Colin Powell and veterans of Desert Storm.

During his talk in Austin, Castle said two things were missing from the seminary curriculum: having the experience of walking in the steps of the Master and community organizing.  He thought everyone called to follow Jesus should visit the Holy Land.  And, if memory serves, he was adamant about learning how to organize a parish community to do the work of the gospel.

There had been a history of police cars from the local precinct parking on the sidewalk in front of his church, St. Mary’s in Harlem.  When repeated requests to move the cars were ignored, he covered the windshields of offending cars with a mixture of flour and water and wrote, “This Police Officer Disrespects Our Community.”

“That is how I’ll go down in the annals of history,” Castle told Keizer.  “St. Patrick got the snakes out of Ireland, and I got the cars off the sidewalk on 126th Street.”

Castle lived the courage of his gospel convictions.  He, like his church, opposed the death penalty.  He pushed his church to acknowledge the sin of racism.  And he lived to speak and passionately advocate for those who had no voice or no access to power.  Our church needs more leaders who are inspired to follow Bob Castle’s example.

— The Rev. Canon Dan Webster is canon for evangelism and ministry development in the Diocese of Maryland.  He lives in Baltimore.