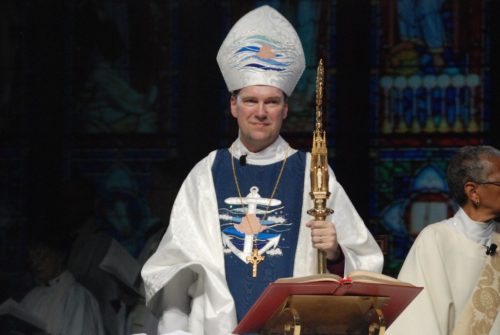 The Very Rev. William Nicholas Knisely Jr. during his Nov. 17 ordination as 13th bishop of the Diocese of Rhode Island. Photo/Richard Schori

Presiding Bishop Katharine Jefferts Schori served a chief consecrator during the ordination. At a clergy meeting the day before, Jefferts Schori applauded Wolf as well as the Rhode Island search and transition committees, “thanking them for walking the diocese through such a healthy transition,” reported an article on the diocesan website. She told clergy, “where there is health there is promise, and this is a promising new era to begin together.”

The Rt. Rev. Kirk Smith, bishop of Arizona where Knisely previously served as dean of Trinity Episcopal Cathedral in Phoenix, preached the ordination sermon. Smith congratulated Rhode Island for electing a “digital bishop” who knows how to speak the language of the 21st century and engage youth.

Knisely was the first chair of the Episcopal Church’s Standing Commission on Communications and has served on various national and international bodies in that field. He maintains a personal blog called “Entangled States.”

Smith’s sermon began with an unusual request – for all to pull out their cell phones and turn them on. The sermon ended with a similar exhortation – take that phone and tweet or post or check in online to let friends and family see faith in action.

A reception followed the service. Afterward, the ordination’s fall cornucopia decor was scheduled to be donated to local Rhode Island food banks.

Knisely was elected on the first ballot out of a slate of five nominees at the diocese’s annual convention in June.

Knisely has been dean of the Phoenix cathedral since 2006. Before that call, he was rector of St. Trinity Episcopal Church in Bethlehem, Pennsylvania, and St. Barnabas Episcopal Church in Brackinridge, Pennsylvania. He was curate at another St. Barnabas Church, this one in Wilmington, Delaware. He holds degrees in physics and astronomy from Franklin and Marshall College in Lancaster, Pennsylvania, and the University of Delaware and a master of divinity degree from the Berkeley Divinity School at Yale in New Haven, Connecticut.

He was ordained to the diaconate in 1991 and to the priesthood in 1992. Knisely is married to Karen, and they have one daughter.

The Diocese of Rhode Island includes 53 congregations, of which 43 are parishes, with 20,469 members and an average Sunday attendance of 5,601.