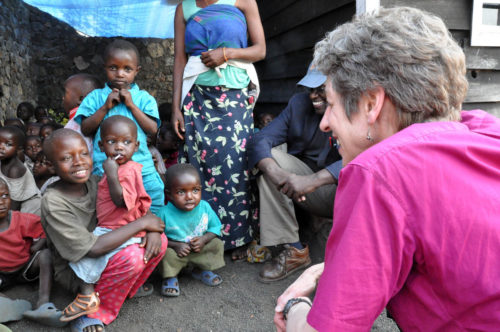 Orphans at Action Salutaire pour Development Integrale/Goma, a church-led NGO, with Presiding Bishop Katharine Jefferts Schori during her July 2011 visit to the Anglican Church of the Congo. Photo/Matthew Davies

[Episcopal News Service] Presiding Bishop Katharine Jefferts Schori has joined fellow Christians throughout the world in calling for a week of prayer Nov. 26-Dec. 2 for the Democratic Republic of Congo.

“Pray for an end to the conflict, an end to violence and the atrocities, that the needs of the suffering may be supplied, and that peace may prevail,” Jefferts Schori said in a Nov. 19 call to action, issued by the Episcopal Church’s public affairs office.

The week of prayer has been organized by the Church Mission Society and the Congo Church Association, with the support of Archbishop Henri Isingoma of the Anglican Church of Congo, in response to a recent increase in violence promulgated by a new rebel group, M23, and several existing ones.

“Our fellow Anglicans in the Democratic Republic of Congo continue to experience violence and displacement,” Jefferts Schori said, noting that the rise in violence since April has caused the displacement of 320,000 within Congo, and 60,000 into Uganda and Rwanda.

The Anglican presence in Congo was established by Ugandan evangelist Apolo Kivebulaya in 1896. Today, the province includes about half a million Anglicans under the leadership of Isingoma, primate since 2009.

“The work of the Anglican Church in Congo continues to be of the highest quality and responsiveness, rooted in the love of Christian for neighbor,” said Jefferts Schori, who visited Eastern Congo in July 2011 and witnessed firsthand “evidence of the work done by Mothers’ Union and other groups on behalf of the least of these – women, children, and orphans, all victims of the violence of war.”

The Democratic Republic of the Congo, a former Belgian colony, has buckled in the hands of corrupt and power-hungry leaders since its independence in 1960. The vast country – about the same size as the continent of Europe – faced more than three decades of “Africanization” and gross corruption under the presidency of Joseph Mobutu, who was supported by the United States as a “friendly tyrant” for his resistance to the Soviet Union. Rebels led by Laurent Kabila overthrew Mobutu in 1997. 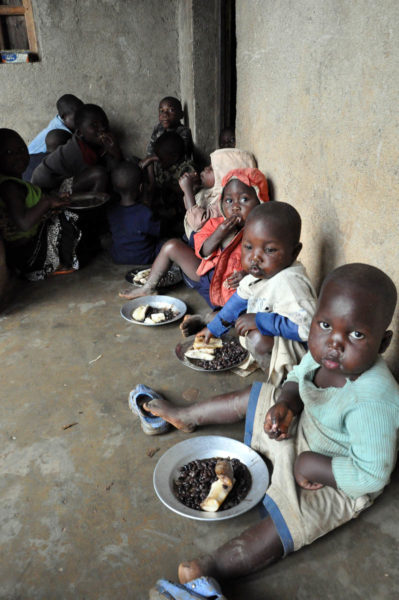 Mealtime for the children at a Diocese of North Kivu orphanage. Photo/Matthew Davies

Initially raising hopes for better times, Kabila was installed as the new president and changed the country’s name from Zaire to the Democratic Republic of the Congo. But his allies became enemies, and Congo entered five years of brutal war in which about 5.4 million people are believed to have perished. When he was assassinated in 2001, Kabila was succeeded by his son, Joseph Kabila, who remains Congo’s president in a power-sharing government that includes former rebels.

The war was fueled largely by a scramble for the country’s vast mineral resources. Rebels in the east, supported by Tutsi militias and neighboring countries Uganda and Rwanda, battled the Kinshasa-based government, backed by Hutu militias and Angola, Namibia and Zimbabwe. In October 2004, the human rights group Amnesty International announced that 40,000 cases of rape had been reported over the previous six years. 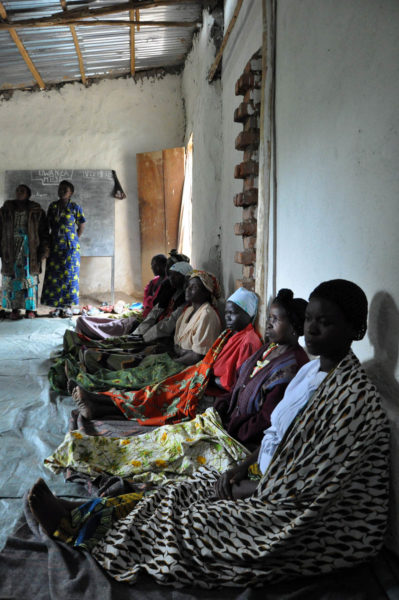 Women who’ve been sexually abused by soldiers find a safe haven at a Diocese of North Kivu facility, where they work through their trauma and carve out a new life with the end goal being their integration back into society. Photo/Matthew Davies

As Congo – which hosts the United Nations’ largest peacekeeping team – attempts to recover from what has been dubbed the bloodiest conflict since World War II, rebel activity still roils the east of the country and is synonymous with gender-based violence, particularly in rural villages. Some reports reveal stories of rebel soldiers raping women while their husbands are forced to watch, then killing family members and carrying out acts of cannibalism.

“Many thousands are living with fear and insecurity, hunger, sickness, and poverty, while they yearn to return home and live in peace,” Jefferts Schori said in her Nov.  19 call to action.

The Mothers’ Union, an international Christian charity that seeks to support families worldwide, plays an important role in taking care of women traumatized through sexual violence.

The United Women for Peace and Social Promotion (Union des Femmes pour la Paix et la Promotion Social – UFPPS), founded in Katanga in 2003, has built on the work of the Mothers’ Union to promote and facilitate women’s engagement as messengers of peace and leaders of social and economic development in their communities.

The Episcopal Church, through its former women’s ministries office and Episcopal Relief & Development, has supported UFPPS’s work in medical and psychological healing and social reintegration in the Katanga and Boga dioceses.

Referring to the week of prayer, Jefferts Schori said: “I can think of no better way for the Christian world to prepare for the Advent of the Prince of Peace, and I hope and pray that you will join me in praying during the week leading up to Advent.”

The call for prayer on the CMS website said: “We hope individuals, groups and churches will commit to pray afresh for a resolution and definitive end to the conflict, violence and atrocities, and for a new era of peace, as well as for the needs of all those affected.”

— Matthew Davies is an editor and reporter for the Episcopal News Service.