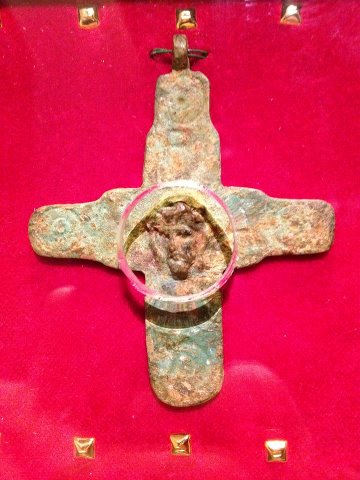 [St. Mark’s Episcopal Church] While perusing the inventory of an antiquities dealer several years ago, a small bronze cross caught Anson Williams’ eye.  Williams, a veteran director of film and television, well-known as “Potsie” and the star of the iconic television series “Happy Days,” describes himself as being “very spiritual,” and having a life-long attraction to sacred art.

“The simple beauty of this ancient cross spoke to me,” says Williams, who acquired the piece after seeing photographs and a description identifying it as a very unique pectoral cross of the Byzantine Empire dating to the early 6th Century.  Admiration of the aesthetic was soon enhanced by a more spiritual experience, Williams claims.  “My appreciation of the cross as a piece of art was soon overcome by a very real sense of something powerful when I held it in my hand.”  Williams felt compelled to share the cross with others.  “Many people who held and touched the cross described to me that they also experienced something very powerful, from relieving physical pain to feeling an indescribable, transcendent peacefulness come over them. Someone began calling it the ‘Healing Cross.’ The name stuck, because that’s exactly what it is,” Williams explains. “I can’t explain its powerful effect, but it’s there. I’ve personally witnessed it.”  A native of Burbank, California who grew up Jewish, Williams says he couldn’t ignore what others had experienced through the Healing Cross, and he began looking for a religious community that could serve as a suitable home for the sacred object.

Fr. Mark Weitzel, the Rector of St. Mark’s Episcopal Church in Glendale, explains that Facebook enabled a connection.  “One of our parishioners has a long-standing family connection to Anson, and he noticed a Facebook post on Anson’s online profile with a photo of the cross and its story,” says Weitzel. “That sparked a dialogue between Anson and the church, and we agreed that the Healing Cross was something very special indeed that should be made available to the public.”

Working with internationally-known designer and sacred art expert Rhett Judice, Williams and Weitzel oversaw the design and fabrication of a stylistically-appropriate reliquary that would protect the Healing Cross while still enabling faithful viewers to touch it.  “We felt it was absolutely necessary that individuals could actually touch the cross while viewing it and offering their prayers and personal devotions,” explains Weitzel.  “The very real presence of the Divine made incarnate is a central tenet of our tradition, so being able to tangibly encounter a holy object that is nearly as old as Christianity itself is an holistic and deeply meaningful experience.”

The location of the church was also a factor in selecting St. Mark’s as the caretaker of the Healing Cross.  “We are located in the heart of Glendale, which is a very diverse community that includes a large population of Orthodox Christians and believers whose traditions are rooted in the Eastern Church,” says Weitzel. “This cross is a sacramental object that may very well have been worn by a prelate of the Eastern Church fifteen centuries ago.”

For his part, Williams is overjoyed that the Healing Cross has found a permanent home not far from where he grew up.  “I feel very blessed to play a role in uncovering a piece of history that can help bring comfort and healing to the bodies, minds and souls of people today,” says Williams.

The Healing Cross is open to the public and is available for viewing and devotion at St. Mark’s Episcopal Church, 1020 N. Brand Blvd., Glendale, California.

(A description of the Healing Cross, which is part of its permanent display, follows.)

“Dating to the 500s AD, the Healing Cross is a Byzantine pectoral cross from the early centuries of the Church. Many who have touched and venerated this Cross have experienced it helping to focus and channel their prayers for healing and restoration of body, mind and spirit.

The face of Christ is very life-like; looking down, expressive, vulnerable yet powerful, encircled with a crown of thorns: the Lamb of God bearing the grief and sorrow of humankind. Depending on the light and angle at which the Healing Cross is viewed, the dimensions of the face appear to shift.

The Healing Cross is housed at St. Mark’s Episcopal Church in Glendale, California. We warmly welcome you to come visit when you are in the Los Angeles area and invite you to touch the Healing Cross. As you touch it and as you pray, reflect on the thousands of faithful people who have touched it, who have been touched by it, and whose lives are part of its story.

The Healing Cross has been graciously lent to the Parish Church of St. Mark by Anson Williams for the prayers and healing of all people.”