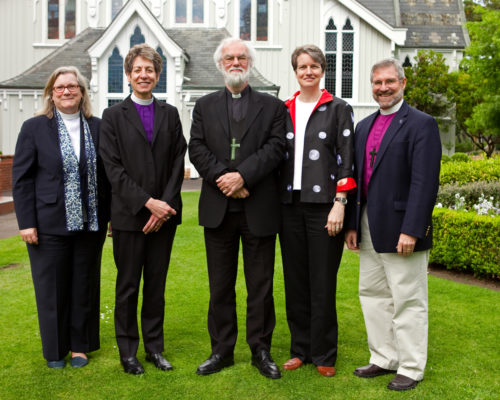 The Episcopal Church was represented at ACC-15 by, from left, the Rev. Gay Jennings of Ohio, Presiding Bishop Katharine Jefferts Schori, Josephine Hicks of North Carolina and Bishop Ian Douglas of Connecticut. They are shown here in their official portrait with Archbishop of Canterbury Rowan Williams (center) outside of St. Mary’s Church in the precinct of Holy Trinity Cathedral in Auckland. Photo/Anglican Communion News Service

[Episcopal News Service – Auckland, New Zealand] The 15th meeting of the Anglican Consultative Council that concluded here Nov. 7 (local time) after 12 days was “remarkable,” according to the four Episcopal Church members of the council.

The Episcopal Church was represented at the meeting by the Rev. Gay Jennings of Ohio, Josephine Hicks of North Carolina and Bishop Ian Douglas of Connecticut.

Hicks, whose term expired at the end of this meeting, is the longest-serving member, although Douglas has been present at four ACC meetings in various capacities. Hicks’ term began with the 2005 meeting in Nottingham, England when ACC members from the U.S.-based Episcopal Church and the Anglican Church of Canada attended as observers after both provinces voluntarily withdrew their participation in keeping with a request from the Anglican Primates — or principal archbishops — to allow space for consideration of sexuality issues.

That first meeting, she told Episcopal News Service during an interview with all four Episcopal Church members before the end of the Auckland meeting, was “exceedingly tense and awkward, although it had its marvelous moments.”

The 2009 gathering in Jamaica was “much more relaxed, a much better atmosphere but still a more contentious undertone which sometimes became more prevalent in really difficult issues” such as the Anglican Covenant, the 2004 Windsor Report and moratoria on authorization of same-gender blessings, consecrations of bishops living in same-gender relationships and cross-border interventions by bishops.

“This meeting has felt very different and even more relaxed, even less contentious, even more of a feeling of congeniality,” Hicks said. “Everyone who was at Jamaica has commented that this meeting has felt more congenial, more positive [with] people clearly committed to the Anglican Communion regardless of positions on the covenant or any other issue.”

Douglas agreed with Hicks. “Without question this ACC meeting has been the most conversational, the least politicized,” he said, calling the meeting that was held primarily in Holy Trinity Cathedral in Auckland  “a place of profound conversation in a way that I haven’t experienced it in the past.”

“I found that we have been able to go much deeper in conversations around how our churches are so different one from another and also what holds us together as the communion itself,” he said. “It seems like a lot of the old animosities and divisions – differences are absolutely still there; I don’t want to paper over them – but all of the old tensions, I’m just not experiencing at this meeting.”

The presiding bishop said that compared with the first two Primates Meetings she attended in 2007 and 2009 and the intervening 2008 Lambeth Conference, this second of the ACC meetings she has attended “is probably the Anglican Communion meeting that has the most demonstrated possibility for building ongoing, lasting relationships that I have seen.”

She added that the most recent Primates Meeting in January 2011 “moved a long way in this direction but, this ACC meeting is profoundly reconciled in our diversity.”

“It gives great evidence of [a] commitment to long-term ownership of the communion in the sense that people are involved and interested in making things work in our varied contexts,” Jefferts Schori said.

For example, she said, the ACC committed to “take ownership” of the work of the communion’s official networks between meetings.

For Jennings, attending her first ACC meeting, it was “a wonderful opportunity to build relationships, to learn more about the various provinces.”

“We have had conversation about the fact that the ACC is the only instrument that has representation from bishops, priests and deacons, and laity,” she said. “There has been a call for more laity to be part of ACC and there’s been conversations about how that might be facilitated.”

Those who came to ACC-15 who are not part of any of the other instruments of communion “consider it a great privilege to be representing their province and there’s a great deal of interest in how the different provinces are alike but, also how they’re dissimilar, so we continue to learn from one another,” she said.

Hicks also noted the change in direction of the meeting’s attention.

“I am delighted to say that the topics that got the most energy and passion at this meeting were … the kind of peace and justice issues we ought to be spending our time and energy focusing on,” she said.

Douglas said the setting of the meeting was “very key to how we understand unity in all of our difference.”

The Anglican Church in Aotearoa, New Zealand and Polynesia is a province “that’s been really working hard for decades on how do the three strands, the three cultural groups known as tikanga, live together in the fullness of what God is up to in these lands.”

More information about that work is here.

Douglas said he learned that for the province “it has been a hard struggle learning to live together in the fullness of the body of Christ.”

“I think just being here, listening to the different languages, seeing the different peoples in the fullness of who they are and in the ongoing hard work of coming together has been a very important backdrop or foundation for all of our conversations – almost like a microcosm of the larger possibilities and challenges in the larger Anglican Communion.”

Jennings also remarked on the communion’s efforts for deepening its unity in the midst of its diversity.

“What I’ve been struck by at this meeting is that across the provinces there seems to be some appreciation – not just from North Americans, but throughout the Anglican Communion – that our unity is not based in uniform belief or practice. But, rather, our unity is in Jesus Christ and the things that we consider essential in terms of considering ourselves Anglicans,” she said. “This meeting, at least to this newcomer, seems to be much more interested, as Josephine said, around issues of our common life and how we can pursue God’s mission together and seek peace.”

ACC members had “a remarkably creative, deep conversation about a variety of issues we all share,” according to Jefferts Schori.

“This meeting has offered us the ability to learn from the differences that characterize the communion,” she said. “Western churches have talked about the challenges around retaining or attracting young people and enabling their leadership in the church and not simply restricting leadership to long-term older members. They’re realities that apply in Papua New Guinea as well as Aotearoa, New Zealand and Polynesia, in the United States, in the more ancient parts of the church.”

“The newer parts of the church that are growing so rapidly struggle with basic resource issues, which some of our rural congregations struggle with so we have things to learn from the variations in our contexts that are all about how to present the gospel in a way that is attractive and healing for the people we are, set to proclaim the good news of Jesus.”