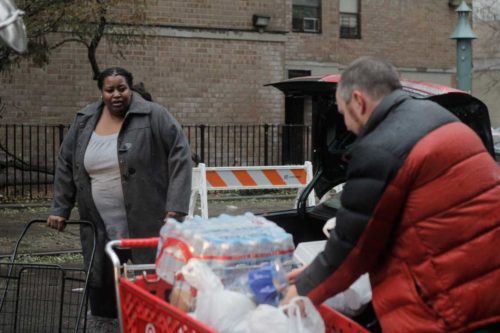 [Episcopal News Service – New York] As the East Coast braced on Nov. 7 for another storm, this time a nor’easter expected to bring heavy rains, snow and strong winds to the region, Episcopal churches continued to provide assistance and relief to residents still struggling to recover from the damage wrought by Hurricane Sandy just over a week ago.

After pummeling the Caribbean, the devastating storm made landfall in New Jersey Oct. 29, killing more than 100 people and leaving millions of people in New York, New Jersey, Connecticut and other states along the Northeast corridor without electricity and, in some cases, water or heat. Tens of thousands of New York and New Jersey residents remained without basic utilities on Nov. 7 as temperatures were expected to dip into the 30s.

On Avenue C and 12th Street in Manhattan’s East Village, the 1,700 residents living in Campos Plaza, where first-floor apartments flooded, still lacked heat, and the garbage had not been picked up in nine days, said Dereese Huff, Campos’ tenants association president.

As Huff left her eighth-floor apartment on Nov. 7 and her voice echoed through the hallway, one tenant shouted thanks from behind her door to Huff for her efforts to help residents after the storm. While Huff rode the elevator to the first floor, another tenant thanked and praised her.

Huff and the Rev. Winnie Varghese, rector of St. Mark’s in-the-Bowery, were headed to Huff’s office, awaiting a carload of prepared food and other items. The supplies were en route from St. Luke’s Episcopal Church in Somers, New York, an area in Westchester County where Sandy left 95 percent of the population in the dark.

Rector Sanford “Sandy” Key drove into New York city to deliver the donation Wednesday morning. As he unloaded the car, he explained that his own parish served hot meals to between 75 and 100 people in the storm’s aftermath through Nov. 6 and served as a power station where residents could charge cell-phone batteries and other electronics. 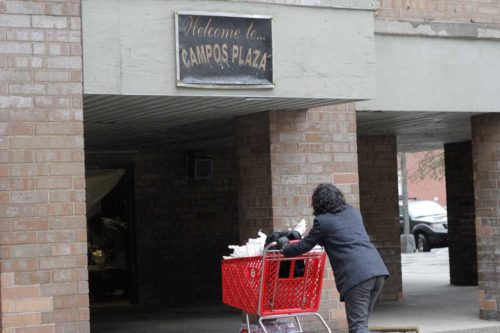 Located on Second Avenue and Tenth Street in the East Village, St. Mark’s is a few blocks away from two public housing projects, the Jacob Riis Houses and Pedro Albizu Campos Plaza.

On Nov. 7 around 10:30 a.m., just before it began drizzling outside, Varghese filled a hand cart with rice, juice boxes and other items and began walking east to Campos Plaza.

St. Mark’s began accepting donations and organizing volunteers to deliver food and other necessities to neighbors who either couldn’t make it to the church to pick up supplies or didn’t know they were there on Nov. 2 when Varghese was able to assess the needs.

Volunteers from St. Mark’s and other Episcopal Churches in Manhattan used flashlights and climbed stairs in darkened buildings to deliver food and water to upper floor residents during the weeklong blackout.

Tom Walker, who attends services at St. Mark’, began volunteering on Nov. 5. It’s been “nonstop” since then, he said.

“There’s great need, and it’s not just the storm,” Walker said. “People are in need.”

“Churches are often well-positioned to see real needs as they emerge in the communities they serve,” Katie Mears, Episcopal Relief and Development’s program manager for U.S. Disaster Preparedness and Response, told ENS. “Understanding the local context and being hubs of informal news-sharing – members talking about elderly neighbors in need, or chatting with guests in the weekly free lunch in the parish hall – helps congregations see the real and varied needs of people.”

“The deep community knowledge that comes with having a long-term presence,” she said, “helps churches see more broadly than the large, visible problems that everyone’s working on, to concentrate on seemingly peripheral concerns that that often fall through the cracks. This is an extremely important role, and one that we as the church are uniquely equipped to fill.”

Varghese said she would reassess the community’s needs on Nov. 12.

The Church of St. Luke and St. Matthew in the Clinton Hill section of Brooklyn is serving as a base of operations for the Diocese of Long Island’s recovery work. It has partnered with Occupy Sandy in its relief effort and distribution of resources and serves as its hub.

“The turnout and response has been enormous. We are doing thousands of hot meals a day and thousands of pounds of essential items delivered to the hardest-hit areas,” said the Rev. Michael Sniffen, rector, in an e-mail message to ENS. “We set up an amazon registry for people to buy needed stuff, and $38,000 worth of stuff has been purchased by people across the country and is en route to the church as we speak. We have had over 3,000 volunteers come through since opening on Saturday.”

On Nov. 7, Sniffen and other volunteers went to Staten Island to assist St. Margaret Mary Roman Catholic Church on Lincoln Avenue, not far from the Franklin D. Roosevelt Boardwalk.

“The damage out here is devastating; the entire community is devastated,” said Sniffen in a telephone interview. “People are just shoveling stuff out of their houses, the water line is above my head on the side buildings. There’s no power anywhere here, or at least within a few miles.

“We are just passing the beach now, and there is a mountain of trash three stories tall.”

Sniffen’s team brought a generator and gasoline and diesel fuel to Staten Island and is working with clergy and the parish council to set up a neighborhood relief center.

The supplies and donations coming into St. Luke and St. Matthew are being distributed mostly to people in need in Red Hook, a hard-hit Brooklyn neighborhood on the water, the Rockaway Peninsula in Queens, and Staten Island. The church is open from 10 a.m. to 8 p.m. daily and will continue to operate through Nov. 17, at which time needs with be reevaluated, Sniffen said.

The Diocese of New Jersey has published a custom Google map geographically pinpointing 16 churches serving as resource centers across the state. Users are asked to contact the church in their area if they are in need of food, shelter and clothing, or if they want to help others in need.

And in the Diocese of Newark, the Rev. Gregory Jacobs, canon to the ordinary and chief of staff, sent an e-mail to clergy reminding them to be mindful of the needs of their communities and suggesting ways to reach out and keep in touch with those in need.

On Nov. 10 at 7:30 p.m., Trinity Wall Street will host a benefit concert, donating 100 percent of the funds to the Mayor’s Fund to Advance New York City to provide food, water, blankets, baby supplies and other essential items needed by those most affected by the hurricane.