[Episcopal News Service — Auckland, New Zealand] The Anglican Communion has expanded the language in its Five Marks of Mission after the Anglican Consultative Council agreed here on Nov. 7 (local time) to say that the communion’s mission is marked by efforts to “challenge violence of every kind and to purse peace and reconciliation.”

The Five Marks of Mission, initially agreed to during the ACC’s 1984 and 1990 meetings, and now amended, are:

The council decided to append the new language to the fourth mark of mission, rather than the original proposal to add a sixth mark that would have read “to advance peace, eliminate violence and reconcile all.” During earlier debate on Nov. 5, the council appeared reluctant to add a sixth item to the list. 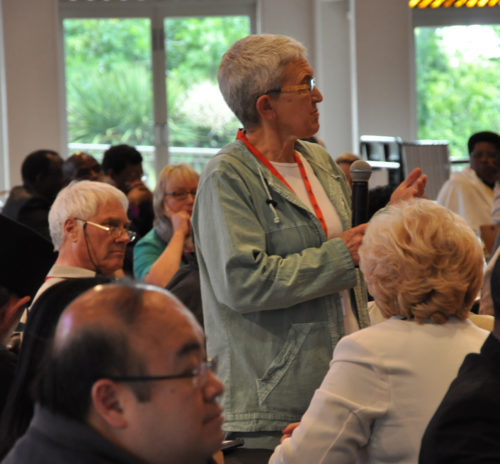 Diocese of Nova Scotia and Prince Edward Island Bishop Sue Moxley introduced the original Resolution 15.34 to add the mark. Noting she had been at the last three ACC meetings, the bishop said that at each one “provinces who have consistently worked at peacemaking and trying to resolve conflicts … have said at every meeting that we need to be saying that that’s a mark of who we are as Anglicans in the world.”

The 14th meeting of the ACC endorsed that request and Moxley said that since then a group of people have been working out the precise wording “that was acceptable to people from a variety of constituencies.”

During the earlier debate on Nov. 5, the council discussed both the original proposed wording and whether to add a sixth mark of mission or to include its intention in one of the other five marks.

Tony Fitchett from the Anglican Church of Aotearoa, New Zealand and Polynesia said he was concerned about adding a sixth mark, saying “there is a risk we could get so many marks of mission that they cease to have the impact that they should have.”

He noted that prior to the meeting he was approached by a New Zealand priest to add a mark of mission about liturgy and worship.

Fitchett suggested adding the proposed wording about peace and violence to the fourth mark of mission that seeks to transform unjust structures of society, adding that the entire concept of the marks of mission are related to reconciliation.

Presiding Bishop Katharine Jefferts Schori said she agreed with Fitchett’s concerns but suggested adding the language to the first mark, to proclaim the Good News of the Kingdom.

“It is part of proclaiming the Good News of the Kingdom of God,” she said. “The kingdom of god — for which we pray daily that it come on earth as in heaven — is about a reconciling world of peace with justice for all, all humanity and all creation.”

Noting that the 1979 Episcopal Church version of the Book of Common Prayer says that the mission of the church is “reconciling the world to God and each other in Christ,” Jefferts Schori said “we have taught for more than 30 years that reconciliation is at
the heart of what it means to be Christian. I think this work is intrinsic to the work of mission.”

Other members suggested changes to what Moxley agreed was the “lumpy wording” of the proposed addition.

When it appeared that the issues over numbering and wording were destined to send the resolution back to the resolutions committee, its chair, Philippa Amable from the Church of the Province of West Africa, and Episcopal Church member the Rev.
Gay Jennings both asked if this meeting of the ACC could act contrary to a resolution passed at a previous meeting.

Resolution 14.05 from the 2009 ACC meeting in Jamaica said the council “endorses the request” from Canada and the Costa Rica meeting “to add a sixth ‘Mark of Mission’ that relates to peace, conflict transformation and reconciliation to the current list of five [and] requests the Mission Department of the Anglican Communion Office to take this process forward and report to ACC-15.”

Jennings, who is attending her first ACC meeting, asked whether “ACC-15 must agree with, promote the resolution adopted by ACC-14, or can this meeting determine something different?”

Council then broke for lunch on Nov. 5, with Moxley inviting those who were interested to meet over lunch, and the resolution came back to the council Nov. 7 where it passed unanimously after little debate.