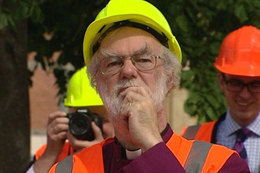 Speaking to the student ‘volunteer army’ at a concert thrown in their honor on Nov. 3, the archbishop celebrated the 75,000 hours of work they contributed to help their stricken city in New Zealand.

Nine thousand volunteers worked with contractors to clear 360,000 tonnes of silt and sludge caused by the earthquake, and provided meals, clean water and guidance to residents.

Reflecting on the concert, Williams said he was struck by “a vivid sense that things could be different.”

“I was surrounded by people who were in their own way, though they would all have been deeply embarrassed by it, showing holiness,” he told a congregation at St. Christopher’s Church, Avonhead, the next day. “That is, they were showing that something could be different. They were trusting in the belief that they would see something change.”

Another mark of a holy person is someone who brings joy to those around them, Williams added.

On his final international duty before standing down, the archbishop was visiting Christchurch to learn how its people are faring almost two years after a magnitude-6.3 earthquake killed 185 people, injured thousands, and left the city partially ruined.

Kicking off the weekend at the Marae diocesan centre, Williams set the tone for his visit by saying that Christians ought to embody God’s promise “to recreate lives that have been scarred and shaken and broken.”

“We are promising ourselves as church to this place, this soil, this community, these people,” he said. “Christ’s body on earth, his people, his family are here to make real Christ’s testimony, Christ’s witness to the God who promises to re-settle and rebuild. Christ’s body on earth is here to announce its commitment to every part of the community, every dimension of its life.”

The Christchurch visit took place during the mission weekend in the program for ACC-15, with other Anglican Consultative Council members joining parish services across New Zealand.

“This is the beginning of a vision for the whole of this country and I’d like to think…a vision for the whole of the world,” the archbishop said. “If anybody doubts for a moment that it’s worth doing something small for the sake of the community, they can think again. We see how something small can make a big difference. I’m a Christian priest and I believe in a God who starts small and ends big. So, start small. Whatever you can do… that makes a little bit of difference, that’s your part in making a big difference.”

On Sunday morning, Nov. 4, the archbishop presided at a service of choral Eucharist at Christ’s College chapel, which has been a temporary home to the Christchurch Cathedral congregation since the earthquake.

He then visited the city’s Red Zone where ruined buildings – including the cathedral – await demolition or repair.

The mayor of Christchurch, Bob Parker, who accompanied the archbishop, said planners wanted not just to rebuild, but to re-imagine the city for the people of Christchurch.

The archbishop also met with parishioners of Avonside in the city’s badly damaged eastern suburbs, where one of New Zealand’s oldest Anglican churches was reduced to rubble. Church members now meet and worship in an office space, but are determined to rebuild and continue their ministry to the neighboring retirement home and local community.

Williams said he was stunned by the scale of destruction. “Driving around I thought the only thing I’ve seen like this really is when I was in Beirut a few years ago.”

“I’ve seen pictures, but it’s different when you see a great historical building very much loved in ruins like that.”

The archbishop gave a message of hope on his final international duty. “I really hope and pray that the strength and imagination that is obviously around here will contribute to make this city something of a beacon.”

Diocese of Christchurch Bishop Victoria Mathews said: “To be doing this when we’re all exhausted and just wondering where we’re going to get the strength to continue on the recovery process, is just wonderful.”

Deepening his contact with local young people, the archbishop also spent time with members of the Christchurch diocese’s young adult movement, the Society of Salt and Light. Sitting on the steps of the dais, he spoke on the topic of “holiness.”

“The way that Jesus talks about [holiness] in the Last Supper is helpful. Holiness there is seen as going into the heart of where it’s most difficult for human beings to be human. So Jesus goes outside the city to the place where people suffer and are humiliated. He goes to the place where people throw stuff out including other people. Outside the camp—in the language of the old Testament—outside the settlement. And that’s the first thing to bear in mind of the Christian idea of holiness. It’s something to do with going where it’s most difficult in the name of the Jesus who went where it was most difficult. And he wants us to be holy like that.”

The archbishop added: “We start then on the path of holiness by two very simple things…that is looking at Jesus, looking at what God is like, looking at the gospel and looking at what all of that means and by exploring. Exploring where human beings are, what their needs are and what they’re calling you to do; how you may help make them more human.”