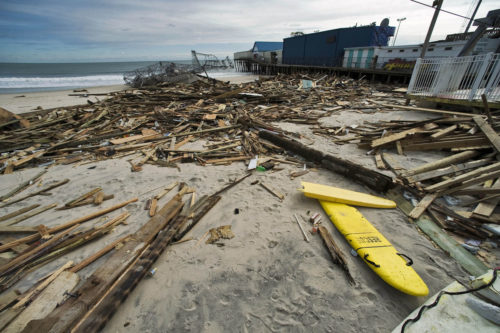 [Episcopal News Service] Updated Nov. 2 at 12:18 p.m. EDT to include information about the dioceses of New York and the Dominican Republic and the church in Cuba.

Dioceses throughout New York, New Jersey and Connecticut continued to assess the damage and havoc caused by Hurricane Sandy as the region made slow progress toward recovery on Nov. 1.

Large sections of the three states remained without power Nov. 1, many of them losing power in advance of the Oct. 29 “superstorm”, and reports of damage and power outages continued to trickle in.

“We feel like we really were spared,” said Nina Nicholson, the diocese’s director of communications and technology, in a phone call with ENS. She added that to the best of her knowledge none of the diocese’s members were injured and the damage was much less than was expected.

All Saints Episcopal Parish in Hoboken, one of the region’s hardest hit areas, suffered damage to its Jubilee Building, taking on at least five to seven feet of water. The parish itself was spared any damage. And at St. Mary’s in Sparta, a tree fell on the parish’s memorial garden. Otherwise, Nicholson said, the diocese has received reports of downed trees, smashed gutters, air conditioners knocked out of windows, and continued power outages.

At least five Newark churches have power and Wi-Fi service and have opened their doors to community members:

The Diocese of New Jersey’s Canon to the Ordinary John Sosnowski, in a message posted Oct. 31 on the diocesan website, urged members to join its Facebook page to keep track of and respond to needs as they surface.

“We have received offers of assistance from churches that would like to help. We urge you to utilize the Facebook page to create connections among your churches and to notify each other about any immediate needs of which you become aware. By creating these linkages, one church may be able to respond to another’s need in a more timely way rather than communicating through Diocesan House,” he said in his message.

Those in the Diocese of New Jersey needing assistance on a larger scale have been asked to contact Episcopal Relief & Development.

The diocesan campus suffered extensive “tree fall” and continues to be without electricity, according to the update.

Katie Mears, Episcopal Relief and Development’s program manager for U.S. Disaster Preparedness and Response, and New York Bishop Coadjutor Andrew Dietsche, were are meeting with impacted clergy from the Diocese of New York on Nov. 1 “to share information, coordinate resources and identify areas of significant need,” according to an update posted to Episcopal Relief & Development’s website.

Mears has also been working with Diocesan Disaster Coordinators in the dioceses of Long Island, New Jersey and Newark, the update said.

(Diocesan Disaster Coordinators are appointed by their bishop to act as the liaison between Episcopal Relief & Development and diocesan leadership, and to encourage and assist the diocese and its congregations in disaster preparedness planning and response.)

In the Diocese of New York, depending on the region, members are asked to contact the diocese’s disaster coordinator, the Rev. Stephen Harding, and in the mid-Hudson region, Val Stelcen.

In a Nov. 2 voice mail message Harding said Staten Island and Region 2 were particularly hard hit, with many downed trees, but so far the diocese has not received reports of catastrophic structural damage.

They have put a system in place to respond locally, with people in the mid-Hudson region helping those in Region 2.

And St. Mark’s Church in the Bowery was to open its doors Nov. 2 from 10 a.m. to 4 p.m. to provide food and water; staffed by church volunteers from above 34th Street.

Diocese of Connecticut Bishop Ian Douglas is in Auckland, New Zealand, attending the Anglican Consultative Council meeting, but is keeping in touch with the diocese by phone. Bishops Suffragan James Curry and Laura Ahrens have been checking in with parishes, said Karin Hamilton, canon for communication and media, in a telephone call with ENS from her office.

In a message to the diocese, Connecticut’s bishops said: “This terrible storm has created great hardship in many of our cities and towns, among our clergy and parishioners as well as our friends and neighbors. In our response to their needs, in prayer and action, we can be agents of God’s mission in the wider community. In this time of recovery we would love to be in conversation with parishes and deaneries about how our church can serve the areas that have been harmed. We are partners with Episcopal Relief & Development’s U.S. Disaster Response and they have resources that we can tap into and deploy to help our neighborhoods recover.”

There’s been some damage, “but not great damage that can’t be prepared,” said Curry in a telephone call. “What we are gearing up for is how can we be of service to the greater community.”

Since making landfall near Atlantic City, New Jersey, on Oct. 29 Sandy has claimed the lives of more than 56 people in the United States and one in Canada, in addition to at least 74 people who lost their lives when Sandy barreled through the Caribbean.

Episcopal Relief & Development has also been in touch with the Episcopal Diocese of Haiti, where damage from Hurricane Sandy appears to exceed that from Hurricane Isaac in late August. Agricultural regions in the southern part of the country were especially hard-hit, leading to concerns about high prices and potential shortages of fresh food. The diocese is conducting needs assessments in impacted areas and continues to receive reports from local clergy, helping to inform the response plans currently in development.

The Diocese of Jamaica, Church in the Province of the West Indies (CPWI), has also suffered extensive damage and are currently in the process of assessing the damage, said the Rev. Glenda McQueen, the Episcopal Church’s officer for Latin America and the Caribbean, in an e-mail message to ENS on Nov. 1.

The Dominican Republic suffered widespread flooding and some 300 people have sought shelter in Episcopal Diocese of the Dominican Republic churches in   and Cuba was hard hit on the eastern side of the Island, confirmed Bishop Wilfrido Ramos-Orench, the Episcopal Church’s officer for Province 9, in an e-mail to ENS on Nov. 2.

In a Nov. 1 statement from Washington National Cathedral, the Very Rev. Gary Hall, said: “We thank God for the meteorologists whose foresight and dedication prevented this unprecedented weather from coming as a surprise. We also offer prayers of gratitude for those whose service has eased suffering and will continue to do so, especially in the most hard-hit regions of New York and New Jersey, over the coming weeks.

“In this period when the universal church honors all saints and all souls, the more than 100 individuals who have died from this storm are on our minds and will be in our prayers,” Hall added. “Their deaths make clear the importance of stable infrastructure and the risks of unstable climate. Honoring their lives, and following the example of so many who helped our country through this trying time, let us strive to find stability and direction in whatever new storms our society and planet may face. May we also render continued praise and thanks to God for all the people and places that matter to us, reaffirming a will to share the talents God has invested, in us, through them.”