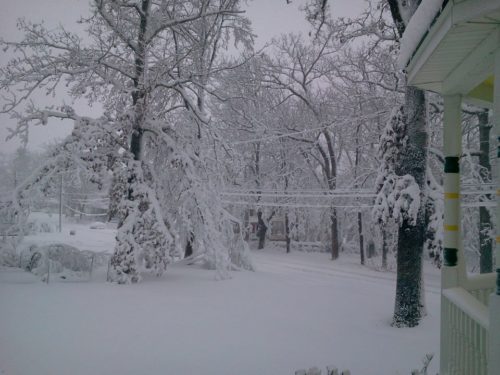 Post-hurricane view from the rectory at St. Matthew’s Episcopal Church in Oakland, Garrett County, the westernmost county of Maryland, where blizzard conditions dumped more than a foot of snow.

Not long after Hurricane Sandy slammed into the Eastern Seaboard on Oct. 29. – claiming at least 55 lives, displacing thousands and causing blizzards, widespread flooding and power outages in America’s most densely populated region – affected Episcopal dioceses were starting to mobilize and assess the storm’s impact.

Episcopalians in Haiti, the Dominican Republic, Puerto Rico and Cuba are picking up the pieces one week after the same hurricane rampaged through the Caribbean, causing at least 69 deaths and bringing further devastation to some of the world’s poorest communities.

Sandy made landfall in New Jersey on Oct. 29 just after 8 p.m. At one point, more than 8.2 million people were without power, according to the Associated Press.

The Episcopal Church Center in New York, as well as the Washington, D.C.-based offices of government relations and federal ministries, remained closed Oct. 30, as did diocesan offices in Long Island, Pennsylvania, Newark, New Jersey, New York and elsewhere. The Episcopal Church Center will reopen on Oct. 31, but staff were urged to exercise caution and good judgment in determining whether traveling to the offices at 815 Second Avenue would compromise their safety or well-being.

Anne Rudig, the Episcopal Church’s director for communication, urged prayers for affected churches throughout New Jersey, especially along the shore, and for the dioceses of Newark and New Jersey in particular.

Although the full impact of Sandy is still unfolding, Rudig noted that, in the storm’s immediate aftermath, houses had been lifted off their foundations and were floating on a state highway, barrier islands along the New Jersey shore had been breached and were under water, and piers and roller coasters lay in the ocean. Meanwhile, about 2.4 million people were still without power throughout the state.

“I am sure that the Episcopal Church will play an important role in the recovery and rebuilding of New Jersey,” she told ENS.

Nina Nicholson, director of communications for the Diocese of Newark, e-mailed ENS on Oct. 30 from a coffee shop in Maplewood, New Jersey, where she was able to find power and wi-fi. She said that the diocesan offices in downtown Newark were without power and e-mail but that the building is undamaged. She has asked all diocesan churches to report in with updates and they are still assessing the hurricane’s impact. [The diocesan offices restored power later in the day but will remain closed on Oct. 31].

In the Diocese of New Jersey, “we are concerned about all our churches, and especially deeply about those parishes and missions on and near the Jersey shore,” said Cynthia McFarland, diocesan director of communications, who noted that power outages have brought down the diocesan website. McFarland said she hopes that each parish will check in with Diocesan House at 609 394-5281.

The Episcopal Diocese of New York has posted a storm update page on its website to help in assessing Sandy’s impact and any ongoing needs from its parishes. The Rev. Stephen Harding, diocesan disaster response coordinator, wrote in an Oct. 31 e-mail to ENS that despite ongoing power outages and water damage in New York City, the diocese seems to have weathered the storm OK.

“Lower Manhattan was among the hardest-hit areas after the storm sent a nearly 14-foot surge of seawater, a record, coursing over its seawalls and highways and into low-lying streets,” the Associated Press reported. “Water cascaded into the gaping, unfinished construction pit at the World Trade Center, and the New York Stock Exchange was closed for a second day, the first time that has happened because of weather since the Blizzard of 1888.”

Meanwhile, fires broke out in Queens, reportedly destroying some 80 homes, and a downtown Manhattan hospital, New York University’s Langone Hospital, evacuated 200 patients after its backup generator failed. More than 15,000 flights were canceled as a result of Sandy.

Episcopal Relief & Development continues to reach out to partners along the U.S East Coast and throughout the Caribbean as they assess needs and develop response strategies. The agency has developed a bulletin insert for use in congregations this Sunday.

Sharon Tillman, director of communications for the Diocese of Maryland, said she had been reassured and encouraged by Episcopal Relief & Development’s preparatory work in the days leading up to the storm, noting that the agency’s Katie Mears had mobilized all the disaster coordinators in potentially affected dioceses to ensure that they were connected and prepared.

“From Virginia to New York, we were on an e-mail list, helping each other out and sharing information,” Tillman told ENS during an Oct. 30 telephone call.

Tillman said there had been no reports of damage to diocesan churches or parishes, but that the main concern was in western Maryland, which had been hit by snowstorms. She said almost 200,000 people remained without power throughout the state.

The Rev. Elizabeth Kaeton reported that the coastal regions of Delaware, which had been evacuated on Oct. 27, had flooded from the storm surge the day before Sandy made landfall. Kaeton’s home is 15 feet from the water and she has been staying with friends.

“When we visited on Sunday afternoon after church, we couldn’t get down the street for the flooding. We anticipate the waters will recede today and hope we’ll be able to return home later today, if electricity is restored,” she said.

Kaeton says she gives “special thanks and praise” to all the first responders who kept everyone safe.

“I’m also aware of and deeply grateful for all the behind-the-scenes coordination with hospice care, public health officials, and police and fire and ambulance people who were evacuating home-bound people … who live too close to the water and were transferred to hospitals and extended care facilities to ride out the storm,” she added. “These are the little miracles the media doesn’t focus on and those involved in the coordination would never seek attention or accolades.”

Bishop Mike Klusmeyer of West Virginia e-mailed ENS to say: “So far, so good…except that in my count nearly 50 percent of the people are without power, and statewide, more than 15% of the population is without power. I have not heard from a couple of upper elevation places, so I don’t know about some of the potential hard hit zones. Keep us in your prayers.”

In the Diocese of Pennsylvania, Bishop Charles Bennison told ENS that St. Mary’s Church in Warwick and St. Peter’s Church in Germantown sustained some hurricane damage, although further information was not immediately available.

In the Diocese of Long Island, St. Bede’s, Syosset, was damaged by falling trees, according to the diocesan website.

In Massachusetts, the public transportation system, which had been temporarily suspended, was back up and running on Oct. 30, and the diocesan and cathedral offices in downtown Boston reopened after closing on Oct. 29 in response to the governor’s request that workers stay home and off the roads, according to Episcopal Diocese of Massachusetts Director of Communications Tracy J. Sukraw.

Massachusetts clergy “are consistently reporting power outages and downed trees and limbs, but no injuries or serious property damage beyond some roofing, broken windows and leaks,” she wrote in an e-mail to ENS. “Many of them convey their concern and ongoing prayer for those who have suffered worse elsewhere.”

Scaffolding on a bell tower under repair at Grace Church in Medford, about six miles northwest of Boston, collapsed through a roof and broke a stained-glass window.

Meanwhile, St. Andrew’s Church on Martha’s Vineyard was undamaged and open for Morning Prayer at 8 a.m.

Ruth Meteer, communications director in the Episcopal Diocese of Rhode Island, said in an e-mail to ENS that “so far we’ve not heard of any church damage in the areas where it would seem most likely, but power and cell phone service is still out in much of the south of the state.”

Paul E. Cooney, canon to the ordinary in the Episcopal Diocese of Washington, told ENS that they still were surveying the impact but that so far had not heard of any significant damage from the storm.

Henry D.W. Burt, secretary of the Episcopal Diocese of Virginia, said: “So far we know of no damage to our churches but continue to reach out to affected areas offering help. Our prayers are with those in areas north of us that faced the brunt of Sandy’s fury. [We] stand ready to provide guidance in our own diocese and beyond.”

Sandy is the 18th named storm of the 2012 season and the largest Atlantic tropical system on record. After merging with cold weather systems from the north, the hurricane turned into a “superstorm,” measuring at one point almost 2,000 miles in diameter.

Sandy developed on Oct. 22 and caused major devastation throughout the Caribbean before heading towards the U.S. East Coast.

The Rev. Kesner Ajax, coordinator of the Episcopal Diocese of Haiti’s partnership program, wrote in an Oct. 26 e-mail to colleagues: “The situation is devastating. The storm stayed for almost five days. The rain fell without ceasing. The wind was very strong. The streets are flooded. In some areas the water is waist-deep.”

Ajax said that many bridges in Haiti had collapsed or been destroyed by the hurricane. “I have seen streets that I pass every day now are rushing rivers. As much as this saddens me, I am not surprised. With the infrastructure we have, these results are to be expected,” he said. “There are many people who were still living in tents or in unsafe housing, and the hurricane took away what shelter they had.”

The hurricane has left many people displaced in Haiti after what has been a devastating two years of natural disasters, Ajax said. Thousands of Haitians are still living in tents after their homes were destroyed by the January 2010 earthquake. “Many families in Haiti already had a difficult time providing for their families. Now after the hurricane, it is more difficult to find food to eat, and people who give food cannot provide for everyone who needs it.”

Ajax asked for continued prayers for the people of Haiti. “It means so much to me and to the Haitian people,” he said. “Thank you so much for these prayers and for everything you have done for us already. It is appreciated so much.”

— Matthew Davies is an editor and reporter for the Episcopal News Service.