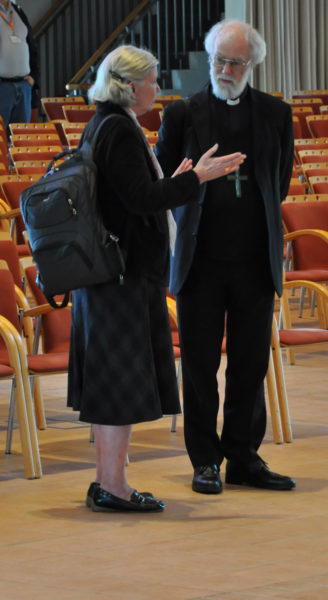 Those reflection group conversations, preceded by a short plenary session open to the public, has been the pattern of this 15th meeting of the ACC.

Before the Oct. 31 reflection conversations began, New Zealand Diocese of Christchurch Bishop Victoria Matthews asked the members to consider “why [the covenant] is a cause of fear and why is it a sign of hope for others?”

The results of the reflection conversations were to be given to the Inter-Anglican Standing Commission on Unity, Faith and Order (IASCUFO) and the Anglican Communion Standing Committee “as they discern the ways to take the matter forward,” according to a handout on the process.

The members are scheduled to again discuss the covenant on Nov. 6, the penultimate date of their Oct. 27-Nov. 7 meeting. It is not clear if any resolutions about the covenant will be proposed during that session.

The groups heard from each member about the status of consideration of the covenant in their province, what that process has looked like and what the experience has taught the province about being Anglicans and being part of the Anglican Communion.

Hicks said the conversation about the processes used in each province “reminded us that we govern ourselves through different processes around the communion and we struggle to understand each other’s process.”

“Someone commented that hearing that a province has rejected or accepted the covenant impacts another province’s thinking process,” she said, adding that another person noted that “hearing early on that a number of African churches in particular thought [the covenant] wasn’t strong enough impacted provinces’ thinking.”

When the group considered what the members have learned via the covenant process, Hicks said, “the real theme of those comments was that we have grown as a communion and we obviously have differences but, that what holds us together is much stronger than what divides us.”

“We observed that we are still in communion even though some provinces have rejected the covenant and some have accepted it and some are still considering it,” Hicks said. “That demonstrates to us that we can still be in communion without a covenant.”

Some members of the group said the “covenant process has helped us focus on something other than divisive issues,” according to Hicks.

Hicks began her three-meeting term at the 2005 meeting in Nottingham, England when ACC members from both the U.S.-based Episcopal Church and the Anglican Church of Canada attended as observers after both provinces voluntarily withdrew their participation in keeping with a request from the Anglican Primates — or principal archbishops — to allow space for consideration of sexuality issues.

She said some of the members of her reflection group here commented that “there’s a much less contentious feeling about this meeting [as compared with the intervening 2009 meeting in Jamaica] and people believe that part of that is covenant process helping us focus on relationships being more important than a piece of paper.”

“That feeling seems palpable at this meeting,” she concluded.

Matthews said during her presentation that “it is not IASCUFO’s work to promote the covenant but rather to monitor the reception of the covenant.”

The bishop said that in the course of that monitoring as an ISACUFO member, she has learned that “there are actually two documents going around. One is the document that people have in their mind and the other document is the Anglican Covenant on paper.”

“Sometimes the document under discussion is unrecognizable as the Anglican Covenant,” she said.

During a table conversation the previous day, ACC members discussed how their provinces make hard decisions.

“In the same way your province comes face-to-face with a hard decision, so does the Anglican Communion of churches,” Matthews told the council. “The question behind the covenant is what is the best way. Is there a way that will keep us together safely? What is our deepest fear when we consider decision-making processes?”

Noting that the council had spent the previous evening considering how families can change their interactions from violent responses to ones of peace, Matthews suggested “that in the original idea of the covenant there was a desire to allow the Anglican Communion of churches to be a safe place for conversation and a sharing of ideas.

“The actual document of the Anglican Covenant does not achieve that for all the churches of the Anglican Communion and that’s why some churches have said no to the document,” she said. “Nevertheless, as we heard last night, at the core of God’s covenant is ‘I will be your God and you will be my people.’ And we need to hold that before us.”

Because there are “those who say [the covenant] is punitive and those who say it has no teeth,” Matthews said she believes that the covenant “is not yet perceived, yet alone received, as a truly safe way in which to encounter one another.”

She invited the members to consider why for some the covenant is “something to be feared and for others a sign of hope.”

And Matthews asked the council to “reflect on what there is in the covenant that offers a possible way for us to talk together” and whether the covenant might “potentially helpful in your province when you are faced with a difficult decision.”

The Anglican Covenant first was proposed in the 2004 Windsor Report as a way that the communion and its provinces might maintain unity despite differences, especially relating to biblical interpretation and human sexuality issues. The last ACC meeting, in Jamaica in May 2009, decided to delay release of the third and final draft of the covenant to the provinces for their consideration because the ACC members thought the covenant’s process for resolving disputes needed more work.