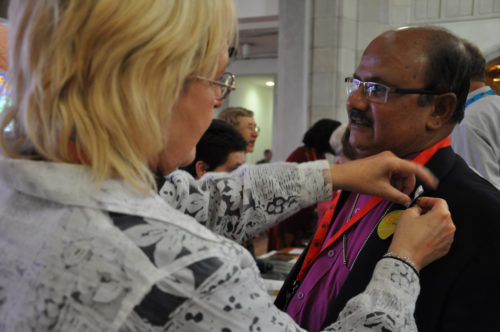 Margaret Dempster, a Canadian from British Columbia, pins a white ribbon representing a commitment to stop violence against women on the Rt. Rev. Samuel Azariah, the moderator of the Church of Pakistan and bishop of the Diocese of Raiwind. Azariah is attending the Anglican Consultative Council meeting in Auckland as a member of the communion’s Standing Committee. Dempster is a member of the International Anglican Women’s Network (http://iawn.anglicancommunion.org/index.cfm) steering committee. The ribbons are from New Zealand’s White Ribbon campaign (http://whiteribbon.org.nz/), whose slogan asks “Are you man enough to stop violence against women?” ENS photo/Mary Frances Schjonberg

The decision came on the fifth day of the ACC’s Oct. 27-Nov. 7 meeting here and followed a public forum on the issues the prior evening.

At that forum in Holy Trinity Cathedral in Auckland, Williams said that “abuse, physical abuse, sexual abuse, neglect of children — spiritual abuse as well — all these present pastoral problems within our congregations and among our ordained members, and it is essential that as churches that we are able say with absolute confidence … there is somebody here who is guaranteed to listen and take you seriously.”

The archbishop said that the church also must be committed “to helping people not cope with or get over abuse but, simply live through it faithfully.”

“But also we are committed to challenging those who behave in violent or inappropriate ways to look at their own behavior, to take responsibility for that behavior and get them to look beyond violence to alternative ways, creative ways of relating to those around them,” Williams said.

The forum’s title, “We Can Stop Abuse,” was both a “very ambitious” title but also a “very appropriate one,” the archbishop said, because “the will is there, the experience is there, the skill is there and the imperative from God is there.”

“With all those together, we really ought to be able to step up to this challenge,” he said.

The Rev. Charles Waldgrave, the Ven. Warihi Campbell and Taimalie Kiwi Tamasese, all from the Diocese of Wellington’s Anglican Social Services Family Centre in Hutt Valley led the forum through a presentation of what they have learned in dealing with victims of abuse.

Campbell challenged the council and the audience that evening, saying, “I don’t just want lip service, I want action” and he promised that he would “challenge every man in this building” to work to stop such violence and abuse.

Kearon told the council Oct. 31 that “we have achieved a milestone” as a communion by talking about the question of abuse and gender-based violence. Now, he said, it is time to move from words to action.

He asked the members to determine during conversation around tables, where they were seated by regions, “what actual initiatives could be done realistically within your own area.” The notes from those discussions will be given to the yet-to-be named monitoring group that will be charged with seeing that “these issues are actually addressed in the communion,” Kearon said.

Bishop James Tengatenga of Southern Malawi, ACC chair, cautioned the council that
“there is something about being church that interferes with some responses” to gender-based violence and abuse, and he urged the members to think of ways to overcome that interference.

Garth Blake, a Sydney, Australia lawyer and convener of the communion’s new Safe Church Network, said during an Oct. 31 press briefing that many parts of the communion have begun talking about how to address the issues and are at various stages of response.

What was then known as the Safe Church Coalition conducted a conference in 2011 in British Columbia that looked specifically at abuse in First Nations boarding schools, according to Blake. He said the group, which officially became a communion network on Oct. 30, will also run a regional conference in Africa in March 2014 at the request of the bishop members of the Council of Anglican Provinces of Africa (CAPA) and he is exploring with Asian members of the ACC the possibility of holding a conference in that region.

“The issue of abuse is being named,” Blake said, adding that the network’s “role is also our challenge and that is how we can engage in a responsible way with all parts of the communion.”

“There seems to be a number of different strands of this ACC that are really coming together around this issue,” he said.

On Oct. 30, the council had passed Resolution 15.7, from the Inter-Anglican Family Network, the International Anglican Women’s Network and the Francophone Network, concerning gender-based violence. It endorses the Primates Meeting 2011 letter concerning gender-based violence (available here), “rejoices” in the work already being done in the communion to combat gender-based violence, recommends that the communion’s theological schools train all clergy and other ministers concerning gender-based violence, endorses the White Ribbon campaign, commends the archbishop of Canterbury and the churches in Burundi, Rwanda and Congo for gathering faith leaders and agencies to discern “what might be said and done together in responding to sexual violence as a weapon of war and terror” and endorses Anglican involvement in the We Will Speak Out coalition of churches and Christian agencies against sexual violence, and encourages churches to “provide an environment where boys and girls are equally valued and equally able to participate in learning and activities that foster positive and respectful relationships irrespective of gender, ability and ethnicity.”

The communion’s attempts to address such abuse also have roots in the 2008 Lambeth Conference when the bishops and their spouses discussed power abuses in joint session. The session included a theatre group dramatizing Jesus’ attitude toward women. Another account of that session is here.