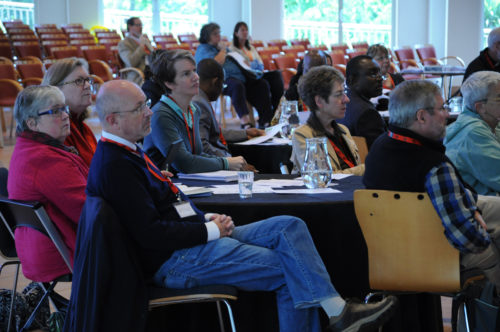 The Episcopal Church’s ACC members listen to a presentation Oct. 30 (local time) during the fourth day of the Anglican Consultative Council’s meeting in Auckland. They include (from right and then counterclockwise) Diocese of Connecticut Bishop Ian Douglas, Presiding Bishop Katharine Jefferts Schori, Josephine Hicks and the Rev. Gay Jennings. Also seated at the table are the members of the Anglican Church of Canada’s ACC delegation: the Very Rev. Peter Elliot (foreground), Suzanne Lawson (to his left) and Diocese of Nova Scotia and Prince Edward Island Bishop Susan Moxley (obscured at right). ENS photo/Mary Frances Schjonberg

[Episcopal News Service — Auckland, New Zealand] On the fourth day of its Oct. 27-Nov. 7 meeting here, the Anglican Consultative Council passed a number of resolutions on the environment and health as well as issues concerning refugees and migrants and gender-based violence.

The ACC began to consider a 123-page report from the Inter-Anglican Standing Commission on Unity, Faith and Order, which covers the Anglican Covenant, future evolution of the instruments of communion as well as ecumenical dialogues. That discussion will continue, along with possible resolutions, on Oct. 31, Nov. 2 and Nov. 3, with the covenant discussion set for Oct. 31.

The members also heard from Sally Keeble, director of the Anglican Alliance, who explained the work of the relief, development and advocacy group begun at the ACC’s request during its last meeting in Jamaica in 2009.

Keeble told the council that the alliance is not intended to be a programmatic agency, but rather one that provides capacity building, networking and advocacy across the communion. And, she said, “an absolute founding principle” is that the organization’s priorities in combating poverty “should come from those people who are closest to it.”

Thus, the alliance held four regional consultations during 2011 to start having conversations about its direction. Those regions are Asia, Africa, Latin America and Caribbean, and the Pacific, she said, adding that conversations have begun about holding a similar meeting somewhere in North America soon.

The development priorities that emerged from those conversations include issues of economic empowerment, peace and reconciliation, governance, climate change, food security, and migrants and refugees, as well as empowerment of youth, women and communities. All of those priorities are to be underpinned by theological reflection, Keeble said.

An audio stream of Keeble’s presentation is available here.

Council members, who were seated according to region and spent time discussing Keeble’s presentation, reported a growing awareness of the need to have more regional conversations on these issues, as well as the need to improve communications channels so that that sort of information can be more easily shared.

For instance, Joanildo Burity, the ACC member from Igreja Episcopal Anglicana do Brasil, raised the issues of translation on many levels, including how to help people begin to ground such relief, development and advocacy work in the Gospel. In addition, he said, some of the terms such as “food security” do not always have widespread or commonly accepted meanings. And, in some cases, church people, academic and government officials do not always speak the same language, he said.

ACC chair and Diocese of Southern Malawi Bishop James Tengatenga told the members his table discussed the fact that the alliance could bring “a bigger voice” from the entire communion to bear on regional issues. “That is very, very much welcomed,” he said.

He reiterated Keeble’s insistence that “it’s really important for the alliance not to be a funding agency.”

During a later press conference, Keeble said that the fact that the Anglican Alliance is not a funder has meant “that we can get away from discussions about donor and donee relations and we can talk about what the needs of the community are, and we can build on from there.”

Keeble called that change “energizing,” especially “given the history of the relations between the developing world and the developed world.”

The acknowledgement that changes in the world’s economy means there are financial resources in the developing world “opens up a completely different way of working and it opens up much more constructive opportunities for talking about the way in which you confront poverty and injustice,” she said.

While the alliance is concerned with both development and advocacy, the third of what Keeble says are its “pillars” is relief work and she called it “the most complex area of our work.”

“That’s partly just because of the sheer scale of it and the fact that there’s so many countries in the communion that face just the most horrific disasters both natural and conflict-related,” she said, adding that the alliance office receives near weekly requests for help with disasters that haven’t made the headlines.

“It would have been very simple to have said we just deal with disasters in poor countries but what came out of the consultations, and rightly so, is that actually you have to respond to needs wherever it arises,” she said. “You can’t say that a hurricane victim in New York is less of a hurricane victim on a Pacific island or a Caribbean island. And what we’ve had to think about is how we’re going to respond.”

Sometimes that response is “support through prayer” or help with immediate access to cash, Keeble said, and sometimes it is to help the churches in disaster-prone areas build their capacity to respond to disasters more effectively.

Among the resolutions the members passed were: