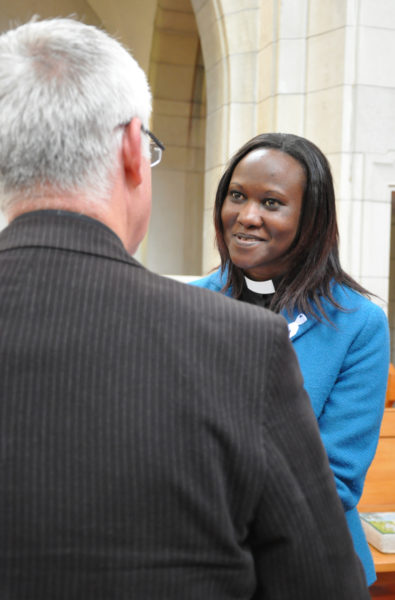 The Rev. Irene Ayallo, a Kenyan priest and one of the contributors to “Life-widening Mission: Global Anglican Perspectives,” talks with a member of the Anglican Consultative Council Oct. 28 (local time), after the official launch of the book in Auckland. ENS photo/Mary Frances Schjonberg

The book is a collection of reflections and perspectives by a group of young Anglicans compiled after their attendance at Edinburgh 2010, an event that commemorated the historic ecumenical Edinburgh 1910 Conference. The essays are written from the attendees’ personal contextual backgrounds in the light of the Anglican Communion’s Five Marks of Mission.

“We had a common vision … of how to be effective in God’s mission,” said the Rev. Irene Ayallo of Kenya, one of the authors, during the launch.

Echoing a theme he has stated earlier during the ACC meeting, Williams said that youth are not the future of the church, but are instead the present of the church. And the young writers whose works are collected in the mission book show that the youthful contingent of the communion is “making its own maps, charting its own course,” not in rebellion against tradition, “but simply getting on with it.”

All provinces accepted ACC invitation; all but one province is attending
Anglican Communion General Secretary Kenneth Kearon said an Oct. 29 (local time) press briefing that while no province is officially staying away from the ACC15 meeting, there are some people missing.

Anglican Communion News Service reported that out of 87 delegates, 10 are not yet present. They include three members from Uganda and one each from Congo, Ireland, North India, Pakistan, Philippines, Tanzania and from among those invited by the Anglican Communion Standing Committee to ensure diversity of membership on the council. Some of those seven are still in transit while others have declined because of personal or administrative reasons, or because of visa issues.

The Church of the Province of Uganda is not represented at the meeting, but only because it forgot to choose its members, he said. The province was due to have chosen its three members this past summer at the same meeting during which the Rt. Rev. Stanley Ntagali was elected the 8th Archbishop of the Church of Uganda.

“The intention was there; which is good,” Kearon said, “But I am genuinely sorry that they didn’t come because there’s a history to that.”

That history includes Uganda deciding to boycott the decennial gathering of the communion’s bishops in 2008 because Archbishop of Canterbury Rowan Williams had invited the Episcopal Church’s bishops. The Ugandan bishops objected because of recent developments in and actions by the Episcopal Church, including its decision in 2003 to allow its Diocese of New Hampshire to ordain and consecrate Gene Robinson as its bishop.

Ugandan Anglicans were involved in a dispute at ACC’s last meeting in 2009 in Jamaica when Philip Ashey, a former Episcopal Church priest accepted into the Church of Uganda in 2005, was not been allowed to be seated as a Ugandan delegate because, the Standing Committee said at the time, his relationship with the East African province is “a result of a cross provincial intervention.”

And, Uganda was also one of seven provinces to boycott the January 2011 Primates Meeting.

Council gets code of conduct
Council members have received a code of conduct concerning discriminatory behaviors, harassment and sexual harassment. The code has been prepared by Anglican Communion Office staff for use at all official communion meetings.

The code commits the communion to ensuring that meetings are held “in an environment of hospitality and safety” and declares that “discriminatory behavior, including harassment of any kind – sexual, ethnic, class-based, age-related or otherwise, is not to be tolerated.”

Among its principles, the code calls on meeting participants to behave respectfully toward others, not misuse their relationships, “be clear with yourself and others about your personal boundaries,” be sensitive to cultural and social differences and “be swift to apologize” if one thinks one’s behavior has caused offense or been misunderstood.

The three-page code also outlines the role of those responsible for addressing reported instances of harassment.

Kearon told the council Oct. 29 that he had been asked if members could put the code of conduct to use in their dioceses and provinces.

“We are happy for you to bring that back to your provinces,” he said, cautioning however that specific wording had been vetted by United Kingdom attorneys to conform to local law and that members ought to get legal advice to be sure that such a code fits with laws in their jurisdictions.

Still, he said, the code “should be the starting point for a conversation in you province.”