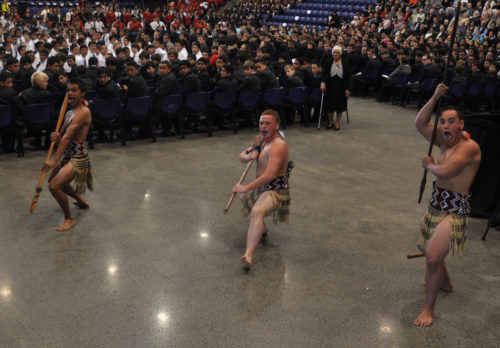 Cyprus Morunga, left, Kahutia Maxwell and Pouoterangi Ngargopo begin their Maori wero (challenge) to the intention of the members of the Anglican Consultative Council Oct. 27 at the Telstra Event Center in Auckland, New Zealand. The Rev. Audrey Wilkinson, standing behind the men, later offered the karanga (call) to welcome the visitors. ENS photo/Mary Frances Schjonberg 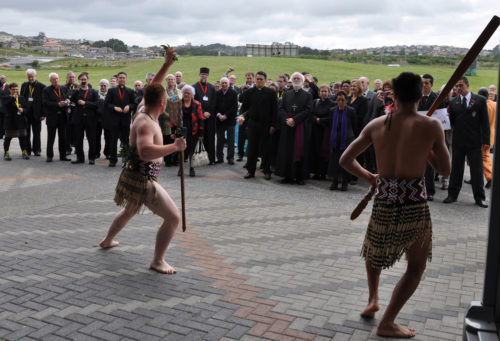 Kahutia Maxwell, center, prepares to lay down a leafy branch in front of Archbishop of Canterbury Rowan Williams to test his reaction during the wero (challenge) part of the powhiri to welcome the Anglican Consultative Council to Auckland. ENS photo/Mary Frances Schjonberg

As part of the wero (challenge), Kahutia Maxwell, one of the three, laid down a leafy branch in the space between him and his fellows, and the assembled council members. When Archbishop of Canterbury Rowan Williams solemnly picked up the branch, it was clear that the council meant no harm so Maxwell, along with Cyprus Morunga and Pouoterangi Ngargopo, escorted the council members into the arena.

Once inside, the council was treated to karanga, a form of female oratory which uses imagery and expression to welcome visitors to the powhiri.

During the whaikorero (formal speech making) that followed the council heard calls of welcome and different challenges from the archbishops who led the Anglican Church in Aotearoa, New Zealand and Polynesia’s three tikangas, which are groupings based on ethnicities. Auckland Mayor Len Brown was also part of the whaikorero.

A waiata, or song, was sung after each whaikorero by the group the speaker represented. In Brown’s case, he led his own waiata, singing “How Great Thou Art” in Maori. 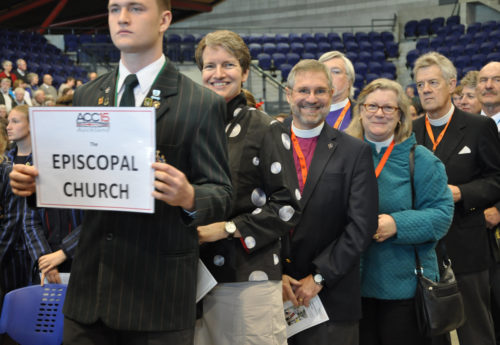 Episcopal Church members of the Anglican Consultative Council Josephine Hicks (behind sign bearer) Diocese of Connecticut Bishop Ian Douglas and the Rev. Gay Jennings, president of the House of Deputies, process into the powhiri Oct. 27 in the Telstra Event Center in Auckland. ENS photo/Mary Frances Schjonberg

The powhiri was the opening event in the ACC’s 15th meeting which is taking place in Auckland Oct. 27-Nov. 7.

Archbishop David Moxon of the Tikanga Pakeha, which includes the seven dioceses in Aotearoa New Zealand, told the council that all the issues it will discuss during its meeting are issues of mission for Anglicans in New Zealand. He urged them to remember that “no one here can say to anybody else: ‘I do not need you.’”

“All of us here together can say no one of us has got it all together, but together each one of us can have it all,” he said.

Archbishop Winston Halapua of the Tikanga Pasefika, which includes the Diocese of Polynesia, said that the ACC is “like the Pentecost day.”

“Before you read about the whole deliberation and the outcome, have a pause and look at the colorfulness of the day of the Pentecost of the Anglican Communion,” he said. “Give a big applause to welcome them, and their wisdom and their languages. They bring with them their contexts.”

Auckland Mayor Brown said that Anglicans were critical to the founding of both Auckland and New Zealand, calling them “the builders of the heart of our nation.” He told the council that the Anglican Communion can remain relevant in the 21st century as long as it never loses that “founding passion.”

“Be at the heart of the community,” he urged, reciting stories of a series of Anglicans in Auckland whose ministry is “at the hard end of need.”

“Never forget that, promote it and see that as your spirit taking you forward,” Brown added.

“Love your people, give us guidance as we build this beautiful city and nation, and a wonderful and peaceful and tolerant globe together,” he said, noting that New Zealand “sits in the crossroads of bold cultural change” as it tries to blend vastly different ethnic groups.

In accepting the community’s welcome, Williams asked for prayers “for a Pentecostal experience, that divided tongues of fire will touch us all in the days ahead, that we shall learn to listen to one another’s languages and experiences and insights with all the enthusiasm and eagerness with which we would listen to God’s own word.”

Williams in turn promised that the council would pray that the “experiments” of the country of Aotearoa New Zealand and the Church of Aotearoa, New Zealand and Polynesia “will be marks and signs of work of the Holy Spirit in the world today and be signs of hope for a world in which by God’s purpose and by God’s promise one of these days all the islands will rise and sing.” 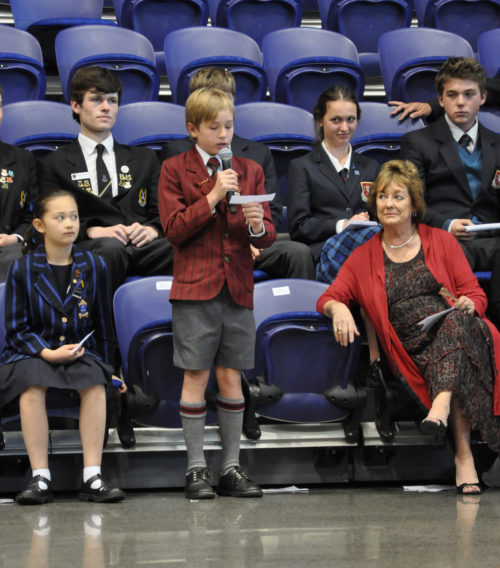 A young Anglican student poses a question as part of a question-and-answer forum during the powhiri. ENS photo/Mary Frances Schjonberg

After the challenges laid down by the province’s leaders and the city’s political leader, the challenging welcome intensified when Williams, Presiding Bishop Katharine Jefferts Schori and Anglican Church of Southern Africa Archbishop Thabo Makgoba faced questions during the powhiri about God, theology and the nature of faith posed to them by Anglican students from elementary to high school. The questions ranged from whether it was fun to be a bishop, to what kind of shoes God would wear if God wore shoes, to “How can you be so sure that God exists?” The students also asked the three to speak about women priests and bishops, and same-gender marriage.

Jefferts Schori told Sadie Summit, who asked what shoes God might wear, that God would wear dancing shoes because God delights in creation. Makgoba chose hunter boots because God walks with us and hunter boots would “enable us to go where we’d rather not go.” Williams said God would wear the kind of shoes that would be easy to take off and give away when God met someone who needed shoes.

On a more serious topic, Williams agreed with his two companions that while “we rightly celebrate the way in which women’s ordained ministry has become part of the life of so many bits of the Anglican Communion,” all of society must pay attention to the larger issue of the “dignity and security of women.”

The question, he said, of “whether we live in a society that degrades women, a society that doesn’t allow women to be safe, a society which turns its face away from violence against women” is going to be “very much on our agenda during the weeks ahead.”

Student Corey Anderson, noting that a same-gender marriage bill is before the New Zealand Parliament, asked what the Anglican church has to say on the subject.

“The short answer is that the Anglican church has quite a lot to say about this issue but, it’s not always the same thing,” Williams replied.

“For the vast majority of Anglicans in the world the idea of same-sex marriage is not one they can come to terms with,” he continued. “Even those who want to say that some kind of recognized public partnership for people of the same sex is a good thing, even they are not too sure whether calling it marriage is right if ‘marriage’ is something with all the symbolic and theological focus that it’s had in the Bible and in history.”

Williams said the disagreements must focus people on “another set of very delicate and difficult issues” around the fact that Christians “have been rejecting and even violent towards people with same-sex attraction and we have a lot of repenting to do there.” 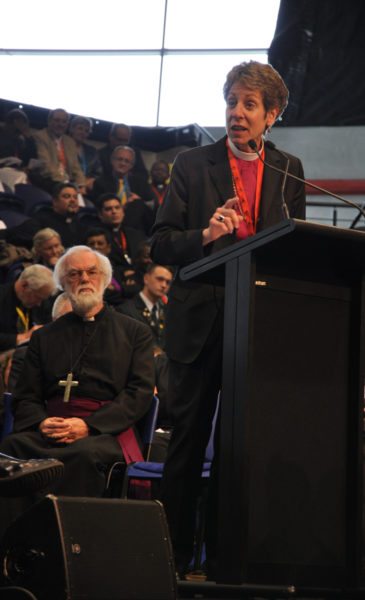 Presiding Bishop Katharine Jefferts Schori responds to a question from a student during the powhiri staged by New Zealand Anglicans to welcome the Anglican Consultative Council to Auckland. ENS photo/Mary Frances Schjonberg

Jefferts Schori acknowledged “many people have found it difficult to hear what the Episcopal Church has said about these issues through its General Convention.”

“Our understanding as a whole church is that people with same-sex attraction seek the same ability in life to live in a covenanted relationship with another person whom they love, that that can be a good thing, that human beings were not created to live alone – that is what Genesis says – and that therefore the church’s task is to help all human beings live in holy relationships that can show the love of God to a world much in need of it,” she said.

The Episcopal Church has been having this conversation for 50 years, Jefferts Schori said, “and we do not all agree.”

“Where we differ is what that [covenanted relationship] looks like,” the presiding bishop said, “and that’s where the conversation is having its most creative possibility. I doubt that we will ever all agree about what that covenanted or holy relationship will look like and what the boundaries are but, if we are unable to have the conversation, we are going to do violence to human beings who need not to live alone.”

Calling the question “a pastoral matter,” Makgoba said there is pain on all sides of the issue, adding “what is important is to respect the dignity of each person as created in God.”

“As one of my predecessors once said about this: ‘the Holy Spirit is not yet finished with us on this matter,’” he noted.

It was those kinds of questions that prompted all three to acknowledge in answer to other questions that it is not always fun to be a bishop or the leader of a church.

“It is unavoidable to take some decisions in the name of the whole church and you know that they are going to hurt people very badly and you just have to be aware of the need to stay with the people that it hurts, and do the best you can,” Williams said, adding that that reality about decision-making is not limited to the church and its bishops.

Asked whether it is fun being the leader of the Anglican Communion, Williams replied, “It depends which day of the week you ask me.”

He went on to make a distinction between something being fun versus being joyful.

“And when I thank God for calling me to this job, which I do sometimes – sometimes through gritted teeth – I say thank you for the joy, the unexpected joy, even when it’s not exactly fun,” he said.

Formed in 1969, the ACC includes clergy and lay people, as well as bishops, among its delegates. The membership includes from one to three persons from each of the Anglican Communion’s 38 provinces, depending on the numerical size of each province. Where there are three members, there is a bishop, a priest and a lay person. Where fewer members are appointed, preference is given to lay membership. The council generally meets every three or four years.