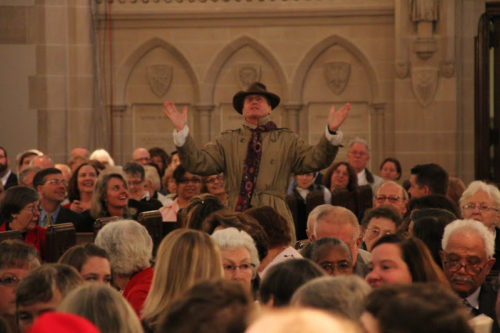 Moments after the sermon, and just before the assembled bishops were to examine and ordain the Rev. Dorsey W. M. McConnell, attention turned to man in a brown trench coat and hat making his way up the center aisle and introducing himself as Morgan, an early 20th century Welsh bridge builder who immigrated to Pittsburgh.

“Bridges! Bridges are the most beautiful things in the world,” he shouted.

Morgan, in fact, was McConnell, a one-time actor. He and a group of diocesan youth then performed a six-minute sketch that told a parable about Morgan’s heaven-inspired vision to build a splendid “bridge of the angels.” As the story goes, his idea was rejected by all, save for a few children who built a “rather unusual” prototype that would miraculously save dozens of families from the flood and resulting fires that ravaged Pittsburgh in 1936.

The lesson was that God is in the business of building bridges for salvation and as “Morgan” McConnell repeatedly confessed, “Everything is possible with God!”

The skit in that setting “made a clear statement that Bishop McConnell is someone from whom to expect the unexpected,” the Pittsburgh Post-Gazette noted in its coverage. 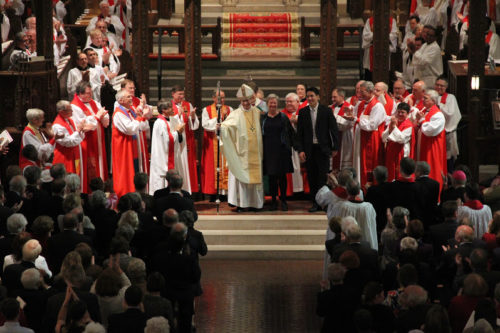 Bridge-building in the City of Bridges has been a theme McConnell has sounded since his election last April and one he carried forward from his most recent post as rector of the Church of the Redeemer in Chestnut Hill, Massachusetts, and previous ministries in the dioceses of Olympia and New York.

About 1,000 people filled the towering Gothic revival nave of Calvary Church for the ordination liturgy, which lasted almost three hours. McConnell will be formally seated at Trinity Episcopal Cathedral in downtown Pittsburgh on Nov. 9. 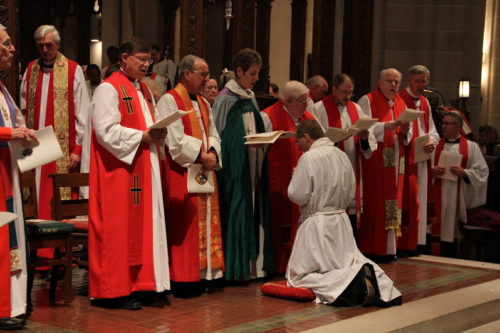 The House of Deputies was represented by its former president, the Very Rev. George L. W. Werner, dean emeritus of Pittsburgh’s Trinity Cathedral and current president of the diocesan Standing Committee.

Nearly 300 lay members and clergy of the diocese participated in the day’s celebration. The sermon was preached by the Rev. Hurmon Hamilton, a minister in the Presbyterian Church (USA) and currently teaching pastor of the Abundant Life Christian Fellowship in Mountain View, California. He is a close friend and longtime associate of McConnell from their days serving in the Boston area.

“God has the peculiar power of bringing good news out of crisis,” Hamilton said in a sermon that mirrored the theme of building bridges in a time of turmoil.

That task will be aided, he said, when believers stop finding fault in others and instead confess their own failings, then come together to be healed and nourished by the Eucharist.

“One of the amazing things about a service like this is that it brings us together, from the left and from the right, and all the places in between. And we come from our various perspectives, just convinced that we are right and everybody else is wrong,” he said as some in the congregation chuckled.

“And as you stand before the Holy Eucharist there will be something within you that will quietly say, ‘Thank God for the crisis.’ Because out of the crisis, good news will come.”

Of the four Episcopal Church dioceses (Fort Worth, Pittsburgh, Quincy and San Joaquin) to re-organize in recent years after a majority of former members voted to secede, Pittsburgh is the first to call and consecrate a permanent bishop.

Pittsburgh is one of 27 dioceses in the Episcopal Church that grew in membership this past year.

Currently the diocese includes 37 actively participating parishes with a total of approximately 9,050 members.

The three bishops who helped the diocese rebuild after the 2008 split — Kenneth Price, Robert H. Johnson and David C. Jones — appeared together during the consecration to hand McConnell the diocesan crozier.

During the announcements, McConnell introduced Betsy, his wife of 32-years, and their son, Evan, 22. The bishop also welcomed 31 members of his former parish and representatives of the International Brotherhood of Electrical Workers, the union which he served for years as chaplain.

A webcast of the consecration service can be view here.

During her visit to the diocese, the presiding bishop met with diocesan clergy and spent part of an evening at a youth rally. On Oct. 21, she celebrated the Eucharist at the Church of the Holy Cross, a predominantly African-American congregation in Pittsburgh’s Homewood neighborhood.

— Rich Creehan is communication director for the Episcopal Diocese of Pittsburgh.