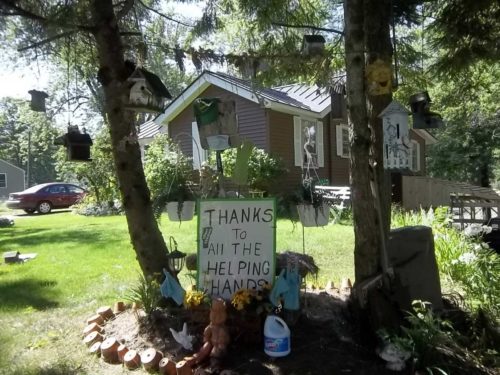 The Donahue family signals thanks to St. Paul’s Episcopal Church, FEMA and their landlord for making the necessary replacements and repairs at the home they rent in Sharon, Vermont, after Hurricane Irene. Photo/Dick Davis

[Episcopal News Service] A year ago, members of Episcopal congregations in the Diocese of Vermont were ferrying peanut butter, casseroles, space heaters and cleaning supplies via cars and trucks along the state’s highways in what was dubbed the “Freeway Relay” to aid Hurricane Irene flood victims.

Today, the relay has ended, but the work to help people rebuild their lives and homes continues.

“People are still reeling,” said Ann Cooper, who is coordinating Episcopal Relief & Development grants in the diocese. “There are people who fall between the cracks, and they’re still between them. And for all the people we help, which isn’t enough, we know that there are at least an equal number of people out there that need help. Part of the problem is finding them, and the other problem is funding them.”

Relief agencies across the state “report that they are still getting new applications every day,” said the Rev. E. Angela Emerson, diocesan minister for stewardship development. “There’s still a lot of disconnection and relocation and resettling that’s going on.”

An e-mail soon after the hurricane to Emerson’s office at St. Paul’s Episcopal Church in White River Junction from a church needing food for its frozen-food distribution program helped launch the Freeway Relay. St. Paul’s became a focal point for the relay along Interstate 91, which runs south from the northeast corner of Vermont. Another relay route ran on the state’s western side. By early October 2011, virtually all of the diocese’s 48 congregations had participated in some way, collecting, donating or ferrying food and supplies to where they were needed, Canon to the Ordinary Lynn Bates said last fall.

While that relief effort ran its course, the need continues.

“The needs are so individualized that you can’t really mobilize things en masse,” Emerson said. “It really has to be tailored to the individual.”

“People are still rebuilding,” she said. Some families are trying to complete construction and return home, while others haven’t begun rebuilding yet. Some need fuel assistance, others siding for their homes, still others skilled labor to tackle the renovations. The challenge is keeping in touch with people – most of whom have returned to work – and matching resources to individual needs, Emerson said.

The diocese has made grants large and small, from paying shipping costs for donated blankets and delivery charges for hay to two farms to aiding the rebuilding of a flood wall and helping to fund debris removal and debt recovery for a small town. Initially, the diocese received $20,000 to $25,000 in grants from various sources plus a $20,000 Episcopal Relief & Development grant, Cooper said. Additional grants from the church agency were made for $50,000 last year and $150,000 in 2012, with probably $55,000 of that yet unspent, she said.

“Many of our grants have gone to people who have fallen between the cracks, who are not eligible for FEMA funding or have been turned down, who discovered damage too late to apply for aid, small businesses, people who have flown beneath the radar,” she said. “In addition, we have tried to help communities recover and prepare for the future, are working with children affected by the flood, have helped build and/or restore community and school gardens throughout the state, etc.” 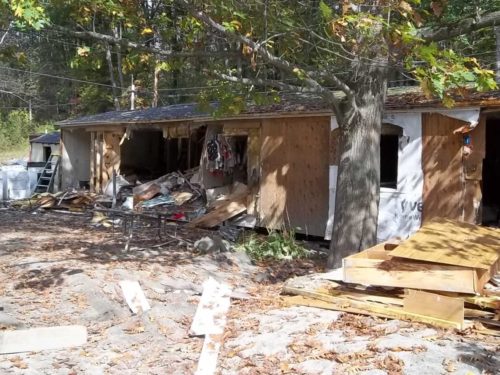 The diocese also has been building relationships.

“In addition to the money we’ve given out, what excites me and inspires me is the working relationship we’ve been able to establish with government agencies – local government and state government – and with long-term recovery committees and with other churches,” Cooper said. One grant, for example, went toward a plan to help restore a streambed to mitigate future flooding and to involve other Episcopal churches, denominations, communities and service groups in the project.

“Part of my job has been to talk outreach committees or whole parishes to try to bring home the continuing serious needs for recovery work,” she said. “The streambed project came out of one such talk.”

Back at White River Junction, the relief work distributing supplies that was based at St. Paul’s recently ended. A new ecumenical ministry called the After Irene Ministry – or AIM – of the Upper Valley, is forming in its place, involving other Episcopal and Congregational churches.

“There are many, many needs out there, and we’re trying to sort that out,” said Holly Hall, a St. Paul’s member who visits homes to identify and record flood victims’ needs and help them manage their stress.

Volunteers have continued delivering water to families who still have none and firewood to replace wood too loaded with post-flooding silt to burn. But as much as such physical needs continue, emotional needs are surfacing.

“Truthfully, the pain is probably more severe now than it was eight months ago because of the reality of what’s been lost and having to still adjust,” Hall said. She’s visited a diabetic man weekly, for example. “When he saw me on Monday was the first time I really heard his anger and rage, because he was really getting in touch with it.”

Over the phone, Hall choked up discussing the families she sees. Actually visiting is easier, she said. “Thinking about it is harder. What amazes me is the number of people that feel that it’s over. When you’re at the grassroots and you just simply visit once a week and you really can witness their high stress, it’s not over.”

AIM is working to help rebuild community as well as aid individual families. Members are planning a Halloween service, for example, for Oct. 28 in the building of a former Congregational church in West Hartford.

AIM now works with 58 clients, said Dick Davis, another St. Paul’s member. Rebuilding is a long-term issue for the area, not only in terms of infrastructure, but also in people’s lives, he said. “I think everyone from White River Junction up to Sharon, which is 20 miles, has probably spent every penny that they had in savings, and many of these people are retired. How do you replace that? So this has got some long-term rebuilding consequences.  … You could write a book on the individual stories.” 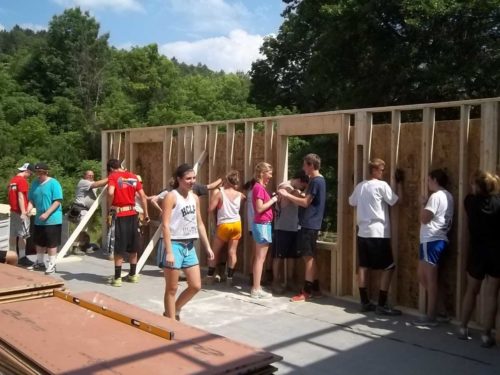 Dream Builders volunteers from churches and a synagogue in Maryland erect a wall in a new home for the Hart family. Photo/Dick Davis

The work is “draining and exhilarating,” Emerson said, noting “the enormous amount of energy it takes to try and keep your own balance and take care of yourself.”

“This is the kind of work that really changes lives,” she said. “You come into contact with people who are significantly traumatized, disoriented and in tremendous grief over all that they have lost. … It just evokes tremendous humility and gratitude in yourself, and just to really see the humility and the resiliency on the part of the people who are receiving the help and their desire to give back somehow – it’s just hard to put that into words.”

Cooper sees the church’s rebuilding work as “evangelism by example.”

“I don’t think you have to walk around with a Bible and a cross,” she said. “I think if you provide an example of Christ’s life in the world, that that’s evangelism.”

The small town of Stockbridge was “devastated” by flooding, with some areas inaccessible for two weeks, she recalled. From the beginning, individual churches provided assistance. One day, one of the residents said: “You know, we all want to be Episcopalian!”

“It’s evangelism by example,” Cooper said, “and that, to me, is the most effective kind.”