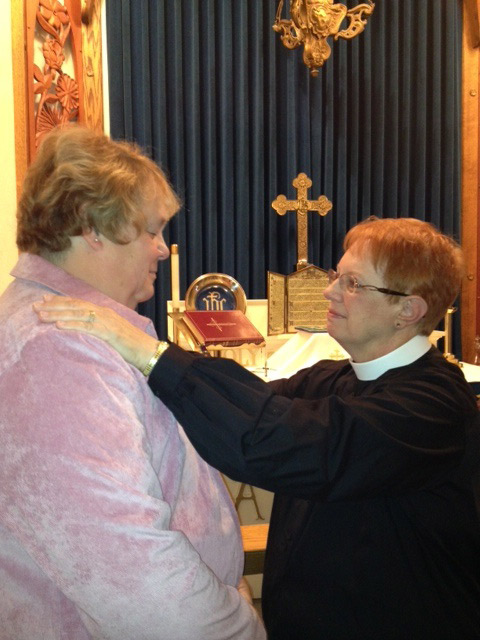 The laying on of hands can be a powerful part of healing prayer, say those involved in healing ministry. Members of the Diocese of Western New York will offer healing prayers during a special service today for breast cancer patients and survivors, their families and friends, and members of the medical community. Photo/Deacon Penny Foster

[Episcopal News Service] When the Rev. Cathy Dempesy was diagnosed with breast cancer, she told her parishioners immediately.

“The reason why I was so up-front about it [was that] I was so aware of the need for prayer. I was anointed and had the laying on of hands pretty soon right after my initial diagnosis.”

Today, Oct. 18, on the Feast of St. Luke, Dempesy and three other female clerics in the Episcopal Diocese of Western New York who are breast cancer survivors will lead a service of “healing, hope and thanksgiving” marking Breast Cancer Awareness Month. The Rev. Alison Martin, a longtime survivor, will preach. The Rev. Judy Breny and Deacon Penny Foster also will participate in the service for breast cancer patients and survivors, their families and friends, and members of the medical community. The program will include Eucharist, opportunities for individual healing prayers, a commemoration of those who died of breast cancer and a small resource fair.

In the Diocese of Western New York and elsewhere in the Episcopal Church, healing ministries are alive and growing. This includes parish healing teams, healing centers and chapters of the International Order of St. Luke the Physician.

Those involved in healing ministry say they are living out a gospel mandate.

“The bottom line is that Christ in Luke 9:2 said that we are to preach the kingdom and heal the sick,” said the Rev. Nigel Mumford, director of healing ministry for the Episcopal Diocese of Albany at the Christ the King Spiritual Life Center in Greenwich, New York. “That’s my battle cry.”

Seventy percent of Jesus’ ministry was healing, said the Rev. Jack Sheffield, Episcopal priest and founder with wife, Anna Marie, of Christ Healing Center in San Antonio, Texas. “We don’t believe that the healing ministry is something that’s supposed to be off in a corner somewhere that takes up three percent of our time. We believe that it could be a tremendous focus of outreach for any church.

“We’re starting healing centers in churches. It’s very evangelistic. When people experience the love and the mercy and the release and freedom of God through healing prayer, they want to stay and hang out with you. 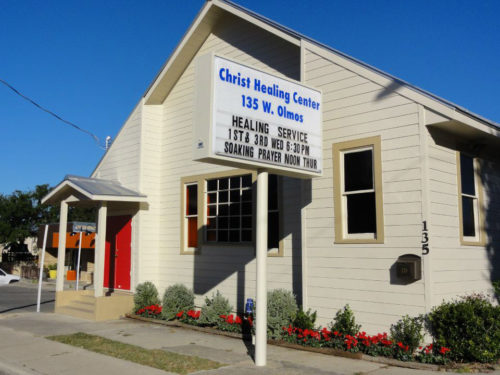 Mumford and Sheffield are both Order of St. Luke leaders, as vice president of the national board and interim North American director, respectively. An Episcopal priest, the Rev. John Gayner Banks, and his wife, Ethel Tulloch Banks, founded the ecumenical order in 1932.

More than 7,500 North American laity, clergy and medical professionals belong, and chapters in various denominations exist throughout the world, according to the organization’s website. The ministry particularly is growing in India, Sheffield said.

“It’s a long-time, well-established healing order,” he said. “It exists for the purpose of bringing the healing ministry of Jesus Christ back to the church. … It’s lay-driven, and so we believe that there is actually an army out there in the pews of people that could be equipped and trained in excellence and really sound biblical theology for how the Lord Jesus Christ is still healing people today.”

At the time Banks founded the order, he said, “we had lost much of the ministry of Christ in regards to making people whole, not just physically, but spiritually and emotionally and mentally.”

Order members pay dues and follow a rule of life. “This one includes daily Scripture, especially of the Gospels where Jesus is healing people,” Sheffield said. It also includes daily prayer for the order, its leadership and those to whom members minister; continuing education; and seeking “such mental and emotional and spiritual and physical health ourselves that we literally embody the truth and teaching of our ministry with radiance.”

Members undertake training, which includes studying Jesus’ miracles and several books, and join local chapters with a chaplain – often the chapter church’s priest or pastor, Sheffield said. The Order of St. Luke is designing a plan to allow lay chaplains as well, he said.

Congregations can expand their healing ministries further by forming healing centers, such as the one in San Antonio. “Healing centers are a little bit more focused, and they really activate the prayer teams,” Sheffield said. “There is a tremendous amount of pain in our culture right now. There’s lots of fear, there’s lots of brokenness … and there’s lots of traumas in people’s lives, and this ministry takes that on headlong.”

At the Texas center, individuals seeking healing receive a full one-hour intake on their first visit and may return repeatedly for healing prayer. “We have doctors who actually send us their patients,” Sheffield said. “I believe it should be a huge part of the therapeutic process.”

The essence of the healing ministry, Mumford said, is to listen, love and pray. Sometimes, physical healing occurs, he said, recalling a couple he found crying uncontrollably at the back of his church. She had been told she needed a heart transplant to save her life – and had to have an abortion to do it. “She’s pregnant, they’ve got to abort the baby, and she might die anyway.”

“I employed everybody at the church to pray,” he said. They brought the couple to the altar and laid hands on them. The next day, the woman called with exciting news: a sixth and final test showed her heart 50 percent healed. She ultimately carried the baby to term and, after giving birth, was told her heart was “perfectly normal.”

“If we could all get into the mindset of the church: to trust God, that he does heal, he does want us to live life to full abundance – that’s why Christ died for us,” said Mumford, a veteran of Great Britain’s Royal Marine Commandos whose most recent book addresses post-trauma healing.

The Rev. David Bryan Hoops, an Episcopal priest and prior of the Order of the Holy Cross monastery in Toronto, served as Order of St. Luke chaplain of the eastern region of Long Island before serving as Holy Cross superior for nine years beginning in 1999. In the Diocese of Toronto in the Anglican Church of Canada, he serves on the bishop’s committee for lay anointing.

“We’re training lay people to be anointers and part of the healing team of ministry,” he explained. About 60 people are signed up for the next training conference in November.

“As long as I’ve been a priest, which is nearly 40 years, I’ve really felt that the healing ministry was an essential part of Jesus’ ministry, and I think he imparted that responsibility to us in the church who continue his work,” he said.

A person can receive healing prayer without being touched, either for a laying on of hands or anointing with holy oil, he said. “It depends on the circumstances, what someone wishes.”

If asked why oil is used, “I say it’s a biblical custom, and, you know, oil is symbolic of healing. It’s symbolic of consecration, and we believe that each human being is a beloved child of God, and it’s sort of honoring that consecration. … This can be an outward symbol of God’s love and God’s grace.”

But you don’t want to convey a message that it’s “magic,” guaranteed to drive cancer away, he said. “It’s simply holding up the person before God and asking God’s intervention in whatever way God feels is appropriate.”

He recalled his mother, paralyzed by a rare form of Guillain-Barre symdrome, receiving healing prayers. “One time I said, ‘Mother, how do you feel you’ve been healed?’ She said, ‘I’ve been healed of bitterness and anger,’ and she said, ‘That’s a great liberation.’”

“I do believe that there are physical healings,” Hoops said. But at other times, people do not receive physical healing but are “healed of some very important problems in life that keep us from being whole, like bitterness and anger and resentments.”

Receiving healing prayer after her breast cancer diagnosis in 2003 helped Foster relate to those who later came to her for such prayers.

“As you pray for people,” she said, “especially if you’ve been in the seat of the person being prayed for, you know how that feels. You know what that’s worth. You know what that means to the people who are seeking God’s healing. I guess that’s one of the things I can thank cancer for, because it stuck me in that position.”

Dempesy recently wrote a column for the Huffington Post saying, “Thank you, God, for cancer.”

“I tell people all the time that having cancer has made me a much better priest,” she said.

For her, the “touch” of healing is important. The “tactile experience of holy oil and hands” can provide relief and soothing, she said, noting that Eucharist also is a tactile act.

“I think in our world we don’t get enough touch. We do so much of our communicating electronically, digitally, etc.” During healing services at the cathedral, “I knew that for an awful lot of people that was the only touch they got all week that was safe and loving.”

When she had cancer, “I never prayed for a cure. I just prayed for grace,” she said. People often will tell her they prayed but weren’t healed. She tells them: “You did get healing. It just wasn’t the healing you envisioned.”

“All of us are bound by our humanity, and our humanity gives us somewhat a black-and-white view of many things – I’m healed or I’m not healed – and I don’t think that is how God heals,” she said. “I think that healing isn’t an event. I think it is a process.”