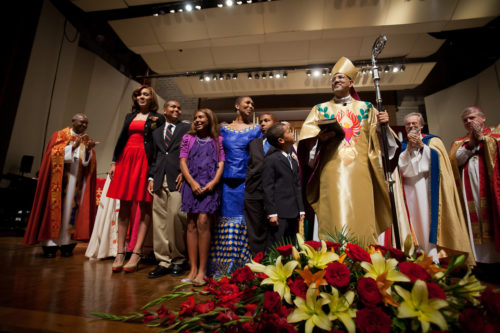 The service was steeped in tradition, with chanting, anthems and Holy Communion.

Held at the Martin Luther King Jr. International Chapel at Morehouse College, the service featured a choir of more than 300 voices and some 25 Episcopal bishops. Among the ecumenical guests was Atlanta’s Roman Catholic Archbishop Wilton Gregory.

Robert Christopher Wright, former rector of St. Paul’s Episcopal Church in Atlanta, who was elected bishop in June by priests and laity, was met at the chapel door by outgoing Bishop J. Neil Alexander.

The two men then followed hundreds of church members processing with church banners emblazoned with vibrant colors and clergy vested in brilliant red, white and purple. The banners represented the 96 congregations throughout middle and north Georgia that comprise the diocese.

A 350-voice combined choir from 52 Episcopal churches and schools sang a variety of hymns, anthems and gospel and spiritual music.

Scripture passages during the service were read in Spanish, Haitian-Creole, English and Karen, a Burmese dialect, reflecting the diverse communities in the Diocese of Atlanta.

The sermon was delivered by the Rev. Andrew Young, who praised Wright and his wife, Beth-Sarah, saying, “God blessed you to minister together to a world in need of love.”

Young spoke of his civil rights work first in Birmingham and later South Africa, remarking that “reason guided by faith can take on any challenge. We can have justice and mercy together.”

The civil rights worker, former Atlanta mayor and U.S. ambassador to the United Nations, noted that Wright was becoming bishop in a time of great turmoil.

While the congregation sang “Come Holy Ghost, Our Souls Inspire,” bishops encircled and touched Wright while he knelt.

Presiding Bishop Katharine Jefferts Schori, the first woman to head the Episcopal Church, led the other bishops as chief-consecrator.

After the consecration, more than 2,200 worshipers were served bread and wine by priests at multiple communion stations.

One dignitary who traveled to Atlanta for Saturday’s ceremony was the Rt. Rev. Jane Dixon of Virginia, who ordained Wright to the priesthood in 1999. Asked about the qualities that would stand Wright in good stead as a bishop, she said, “He’s a faithful believer.”

Wright earned a master of divinity from Virginia Theological Seminary in 1998. He is currently working on a doctor of ministry in preaching at the School of Theology at the University of the South.

He and his wife have a daughter and three sons who are students at Holy Innocents’ Episcopal School, where Wright is a member of the school’s board of trustees. Another daughter attends college in Virginia.

Wright preached for the first time as bishop Sunday at the Cathedral of St. Philip in Atlanta after being escorted to the cathedra (bishop’s chair) by the Dean Sam Candler.

His sermon was interrupted three times by applause. “There is a challenge here for the church this morning,” he said. “And, by church, I mean you and me. Stop apologizing for being Christians, and be apologists for Jesus Christ.

“This is not about talking points, not about denominations or even church. But, in your own way, in your own idiom, with the same ease you recommend a restaurant or a movie, ‘Comfort others with the comfort we ourselves are being comforted with.’” As he ended his sermon, the cathedral congregation gave the new bishop a standing ovation.

As bishop, Wright will be visiting and preaching at a different parish every Sunday. Among the first parishes he will visit are Church of the Good Shepherd, Covington, and Church of the Mediator in Washington, Georgia.

Contributors to this story include Peggy J. Shaw, Don Plummer and Nan Ross.