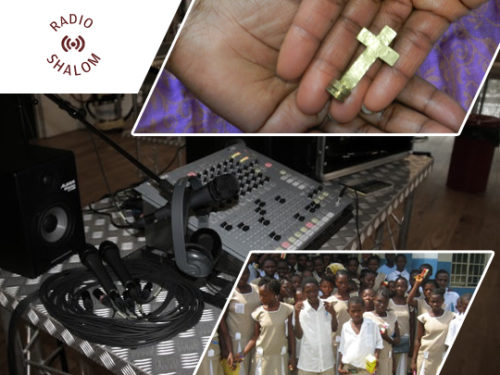 Radio Shalom will start broadcasting its message of peace and reconciliation in November. Radio Photo: Courtesy of World Association for Christian Communication

[Anglican Journal] This November, the new broadcasting station Radio Shalom will be gracing the airwaves in Sierra Leone, thanks to funds raised by the World Association for Christian Communication (WACC).

In an initial fundraising push during April 2012, the Toronto-based WACC met the qualifying target amount of US$4,000 from more than 50 donors within 30 days. That made it eligible to become a permanent member of GlobalGiving, an online funding platform for humanitarian aid and development.

Operating from the country’s capital, Freetown, Radio Shalom will be a peace-and-reconciliation station run by the Council of Churches of Sierra Leone. It is expected to be an important voice for healing in Sierra Leone, a West African country still recovering from a decade of devastating civil war in which killed 50,000 people died. Broadcasting is an essential medium of communication in this country since an estimated 80 percent of the population cannot read.

The station will broadcast programs aimed at peace and reconciliation and work toward healing war trauma and promoting harmony between different ethnic and religious groups. It will focus especially on youth and children, filling in gaps in their education and encouraging them to become peace ambassadors in schools and communities.

“The equipment has reached Freetown and is now being set up in the station,” says Philip Lee, WACC’s deputy director of program in Toronto. ‘They’re currently doing all the planning for launching the programs.”

The campaign is just a few thousand dollars short of its goal of US$12,000. One gift of US$4,000 came from a donor in Tahiti, who wanted to show solidarity with the people of Sierra Leone. Donations can be made at www.globalgiving.org.

WACC was founded in 1968 from an existing organization promoting literacy and broadcasting. Today, WACC champions communication for social change. It believes that communication is a basic human right that defines people’s common humanity, strengthens cultures, enables participation, and creates community and challenges tyranny and oppression.