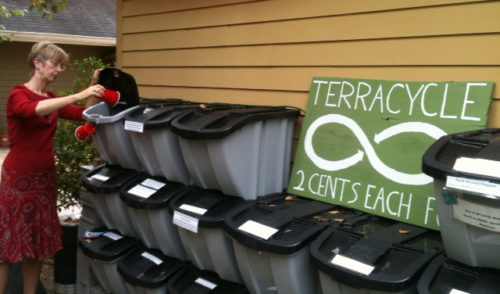 Kathy Stege of St. Gregory the Great Episcopal Church contributes to Tithing with Trash by placing a Solo Cup inside a TerraCycle collection bin at the Athens, Ga., church.

[Episcopal News Service] Georgia Army National Guard Capt. Andrew Lane is a man on a mission. If it’s recyclable, “Captain PLaneT” aims to keep it out of the local landfill – and earn cash for his parish while he’s at it.

Lane launched a Tithing with Trash program at St. Gregory the Great Episcopal Church in Athens, Georgia, when he returned home from a deployment in Afghanistan in 2010. Since then, the congregation has earned nearly $4,800 collecting hard-to-recycle items such as empty toothpaste tubes and Solo Cups and sending them to TerraCycle in Trenton, New Jersey, to earn 2 cents per item. TerraCycle, in turn, recycles or “upcycles” the trash – turning it into “green” products such as backpacks fashioned from Lay’s potato chip bags.

“They’re not just doing it to hug trees or sing ‘Kumbaya.’ They’re turning it into artwork or consumer products,” Lane said.

The nonprofit TerraCycle partners with some of the world’s largest companies, who sponsor collection programs for particular waste streams – say, spent writing utensils or empty tape dispensers, explained Lauren Taylor, U.S. public relations director. Some sponsor only collection of their brands’ trash, while others accept any related items. Kraft’s “dairy tub brigade,” for example, takes all manner of dairy-product tubs, lids, foil tops and other packaging.

Individuals such as Lane sign up to join a sponsored trash “brigade,” collecting and shipping specified items via United Parcel Service for free to TerraCycle and receiving “points” they turn into cash. “The money earned needs to go to a charity,” Taylor said. “Somebody can’t just decide this could be a great side job for them.” 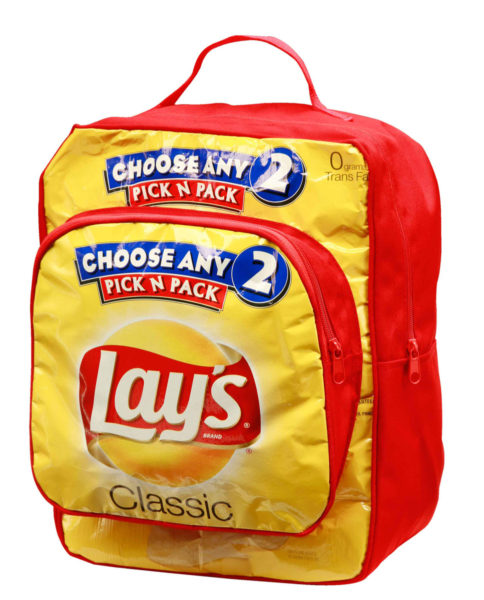 TerraCycle “upcycles” some trash into useable products such as this backpack created from Lay’s potato chip bags. Photo/TerraCycle

“The majority of the people who collect for us are schools,” she said. They set up lunchroom collection points – juice-drink pouches here, candy wrappers there – often after a parent or teacher realizes how much trash is being pitched and thinks, “We’re throwing money away.”

It’s hard to quantify, but churches also participate, and St. Gregory is one of a handful of Episcopal churches signed up to benefit from TerraCycle trash, Taylor said. “We definitely know Andrew because he is just so energetic and just loves our programs and really motivates people to collect. … He is definitely among the most highly motivated.”

Lane is a sustainability evangelist.

“It’s really powerful, because we’re the only creatures in existence that we know of that generate trash that we have to pay someone to haul off,” he said. Without addressing sustainability issues, he said, “for our grandkids it could be deep, deep, deep trouble.”

“We might actually trash this planet and poison its water or run out of water … without an epidemic or a war.”

Lane has given diocesan council presentations about TerraCycle and met Diocese of Atlanta Bishop-elect Robert Wright while separating food waste at the Mikell Camp and Conference Center. “He actually came and shook my hand. He said, ‘I see you’re not actually just speaking; you’re a man of action.’”

In Athens, Lane is lobbying a Kroger grocery store to let the church maintain a collection container for TerraCycle trash. At St. Gregory, parishioners place items in assorted labeled bins.

“I see people carrying in their containers and standing out there and sorting stuff out in Andrew’s elaborate bins,” said parishioner Lois Alworth, a member of the church’s Green Guild/Creation Keepers committee that Lane chairs. “There’s not a whole lot that the church itself uses that TerraCycle takes. What we get is what people bring from home.”

“We all laugh and say because we’re Episcopalians everybody has lots of wine corks,” she said. “TerraCycle takes really odd things, [like] toothpaste containers, when they’re empty, and old toothbrushes.”

Every four to six weeks, committee members gather after church for a “box-up event” to package the TerraCycle items for shipping, she said. 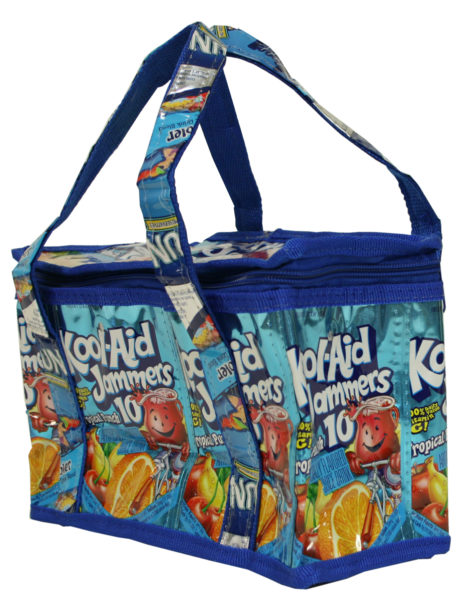 Even here, recycling comes into play. Lane sometimes uses economy-size cat-food, dog-food or chicken-feed bags as shipping envelopes for TerraCycle trash. UPS doesn’t mind as long as the packages aren’t leaking liquid, he said. “You could mail a sweater in there if you didn’t care if your sweater smelled like dog food.”

Lane has his eye on a program started in Canada and expected to launch in the United States this month: a “cigarette butt brigade” that will take all cigarette waste, including the plastic wrap and aluminum board from packaging. This tackles “one of the dirtiest, one of the most prolific forms of waste,” said Lane, who is in his second semester studying for an Army graduate certificate of sustainability through Arizona State University. Look at any paved road in America, and you’ll see cigarette butts, he said. “They’re thrown out, and they sit there until eternity, until they’re washed into a stream or a river.”

A discussion with Lane ranges to environmental topics far beyond TerraCycle, from his battle to promote recycling at the Army’s Fort Stewart to the near-extinction of white rhinos to the role of black soldier flies in composting to Germany’s renewable-energy goals. He describes listening to his son read how Native Americans taught the Pilgrims to bury dead fish with corn plants as fertilizer and noting, “That’s composting.”

At St. Gregory, green initiatives likewise move beyond TerraCycle. The congregation assiduously composts food and paper waste. A church webpage provides current and cumulative data for energy generated by the parish’s months-old solar panels (2.99 megawatt hours so far, enough to power 99 houses for a day and offset 2.07 tons of carbon or the equivalent of 53 trees). Next up: a 450-gallon rain cistern.

“We just need to hook the gutters to it, and we’ll be in business,” Lane said, noting that an inch of rain on a 1,000-square-foot roofline translates to 500 to 600 gallons of water. Installing the gravity-fed cistern to water plans is “taking what the good Lord has given us and not squandering it.”

“Our church,” he said, “may be the greenest church in Georgia.”

Georgia Interfaith Power and Light has supported St. Gregory in its green efforts and awarded the church a Trailblazer Award for its TerraCycle program.

“We encourage all of our congregations to get involved in more intelligent ways of thinking about their waste and … where they throw things,” Executive Director Alexis Chase said. “Other churches are considering doing TerraCycle. Everyone is sort of trying to figure out a way they can be involved.”

Some “brigades” are full, based on the funds partner companies provide, but Lane offers a solution for churches that still want to participate. By request, he’ll send shipping labels for them to send trash to Trenton. He keeps track of the resulting cash and sends 80 percent to the participating church, with 20 percent going to St. Gregory.

“It has two positives: You get paid for it, and you know you’re doing a good thing for the planet,” Alworth said.

But eliminating waste does create a headache or two at church. It took awhile to convince Lane – who says he believes in “zero waste” – that they still needed a trash container despite the TerraCycle, recycling and compost bins, Alworth said.

Once, a mass of fruit flies flew out of an unemptied compost bin while they were setting up a funeral repast; they spent the whole time trying to “swoosh flies away” inconspicuously, she recalled. “That was the one time we came close to not composting anymore.”

“It’s not something you take real lightly, and not every parish has an Andrew,” she said.

But overall, she sees participating in composting and TerraCycle as good stewardship of God’s creation.

“Anything that we do like this helps us to feel like we’re being better stewards than we would be if we sent all this stuff to the landfill to just sit there and pile up,” she said. “I think that’s why people do it. They love the church, they love each other, and they’re willing to do this for the betterment of everything.”

Sharon Sheridan is an ENS correspondent.