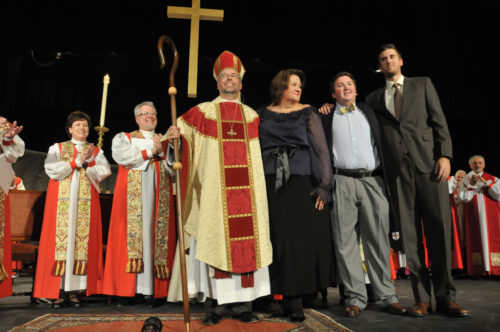 [Diocese of Texas] The Rev. Jeff W. Fisher, former rector of St. Alban’s Episcopal Church in Waco, Tex., was ordained and consecrated bishop in Tyler on Oct. 6 with a combined choir of 50 voices, brass and timpani. More than 350 attended the festival Eucharist in Caldwell Auditorium decorated with profuse arrangements of yellow roses, just a week before Tyler prepares for its annual Rose Festival.

Fisher was elected bishop suffragan at Christ Church Cathedral, Houston, on June 2, 2012. Fisher will serve in the eastern region of the Diocese of Texas and will be located in Tyler. In addition to his regular episcopal visits, Fisher will have oversight of clergy pastoral care and renewal and prison ministries.

High has been nominated to become provisional bishop of Fort Worth upon approval of the diocesan convention November 3.

Fisher’s ordination and consecration was celebrated for an entire weekend with receptions at Christ Church on Friday and Saturday and a luncheon for clergy with Jefferts Schori on Friday.  She also visited an historic African American Episcopal Church, St. John’s, founded in 1892 and All Saints Episcopal School during her stay in Tyler.

While Fisher was rector of St. Alban’s, Waco, the church experienced an unprecedented 85 percent growth. Forced to close the school on campus, Fisher led the congregation to start a community center that now houses community theatre and music programs for youth as well as many other community groups and outreach programs.  A graduate of the University of Texas and Virginia Theological Seminary, Fisher was ordained in 2004 and previously served as chief financial officer for Hand Benefits & Trust, Inc., Houston.

He has served on a number of diocesan commissions and committees, most recently chairing the Greenfield Commission, established to encourage new and innovative church plants. In Waco, Fisher held a successful Bible study class at a local pub.  He also served as leader of the Greater Waco Interfaith Conference and was a board member of the Waco Partnership for Psychological and Spiritual Care.

“A bishop is called to look upon the people and love them, to challenge and encourage them, [and to remind them] that with God all things are possible,” Fisher said. He said his wife Susan had supported him in his decision to leave business and attend seminary, and to stand for election for bishop. Fisher and his wife Susan have two sons, Scott, 21 and John, 17.