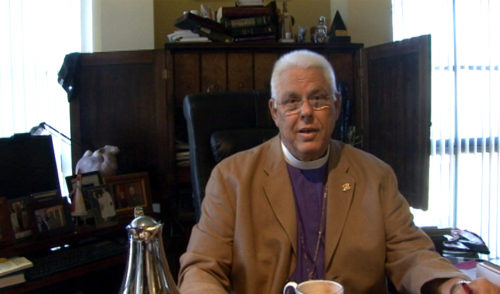 An Oct. 2 video message from Bruno is here.

Bruno celebrated and preached at a Eucharist for Cathedral Center staff on Oct. 3. In his homily he underscored themes of gratitude, transformation and humility, pointing to examples from the life of Francis of Assisi on the eve of that saint’s feast day. He encouraged the congregation to follow the example of St. Francis in living lives of “humility, love, compassion and understanding.”

Noting Francis’ adoption of a life of simplicity in solidarity with the poor, Bruno said, “We are transformed when and if we allow ourselves to be transformed.”

Voicing his gratitude for his own healing, Bruno invited the congregation to join him in prayer for individuals who continue to undergo medical treatment for ongoing conditions.

Bruno said the Eucharist was especially meaningful to him as it was the first he had celebrated since his hospitalization last Spring — and that the location of the Cathedral Center held significance as the home of the Congregation of St. Athanasius where he was called as parish priest nearly 30 years ago.

During the spring and summer Bruno underwent four rounds of chemotherapy at the City of Hope Medical Center in Duarte, California. He said that he will maintain limited office hours for the next few weeks as he continues to recover.