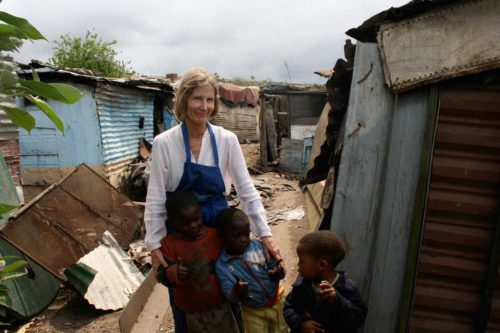 [Episcopal News Service] I have a picture of Jenny McConnachie that, for me, sums up her three decades of service as a missionary of the Episcopal Church. In it, she is standing with three young boys, who are trying to decide what pose they want to make for the camera. They’re in the middle of a shantytown, a community of rickety shacks made of tin, tarps, and whatever else was at hand.

It is the look on Jenny’s face that is most memorable for me. It is a rueful, resigned look, as if she is not excited about enduring yet one more picture and wants it done as quickly as possible. It’s a look that says, “We’ve got work to do here. Take your picture and let me get back to it.” If there is one thing that Jenny McConnachie never—ever—liked, it was hearing about how wonderful her work was. Why would she? There was lots more of it to do.

I came to know Jenny in the two years I worked with her as a Young Adult Service Corps missionary. Jenny ran the Itipini Community Project, a community center in a shantytown on the outskirts of Mthatha, a medium-sized city in South Africa. Itipini is a word that means “at the dump” and it is a good name for a community that grew up on a garbage dump. The socio-economic indicators in Itipini are, as one might expect, abysmal: higher rates of unemployment, HIV/AIDS, and malnutrition; lower rates of education, income, and health.

Jenny and her late husband, Chris, moved to Mthatha as Episcopal missionaries in the early 1980s from Hendersonville, North Carolina, though both were originally from Britain. Chris had been an orthopedic surgeon in Hendersonville but he and Jenny felt there was more need for such work in the Transkei, one the nominally independent “homelands” established by the apartheid government, of which Mthatha was the capital. Chris took over management of Bedford Hospital, an orthopedic hospital in disrepair on the outskirts of Mthatha. Over the course of the next two decades—and as a result of major fundraising efforts in both South Africa and around the world—Bedford Hospital was transformed, upgraded into a working, serviceable facility now almost entirely managed by Africans.

Jenny, who had trained as a nurse, began work in Itipini more than two decades ago.  Over time, working closely with residents of Itipini, she built up a community center in the midst of the shantytown. There was a primary care clinic, a pre-school, an after-school program, a nutrition support program for people with HIV and tuberculosis, a micro-credit program, and much more. To stand in the middle of the community center on a week-day around noon was to be surrounded by a whirlwind of activity. Staff members employed from Itipini prepared lunch for the preschoolers in one area; the line of patients waiting to be seen stretched out the clinic door as Jenny and her South African colleague, Dorothy, patiently treated patient after patient; preschool children poured out of their classroom after their morning lesson and onto the playground. It all happened in Xhosa, the African language spoken by people in Itipini, which Jenny had worked to gain functionality in over the years, learning how to treat all manner of ailments in a language marked by its difficult click consonants.

In the middle of all this, there was progress: people dying of AIDS started anti-retroviral treatment, which reversed the course of their illness and brought them back from the brink of death; young women who had given birth were encouraged back into school and given the support to work towards a diploma; young children who had no toys or learning opportunities at home gathered in the preschool for games and lessons to prepare for kindergarten in a few years’ time.

Itipini is no more. In May, after a complicated dispute, government bulldozers destroyed the shacks. Residents of Itipini were forcibly evicted. Jenny and her staff—some of whom who were among those evicted—worked to help resettle people from Itipini elsewhere in Mthatha, hand on their medical records to a government clinic, and continue the preschool education. But it also became clear that the razing of Itipini meant the end of the Itipini Community Project. After prayer and consultation, Jenny has decided to close the facilities and begin to wrap up her time as an Episcopal missionary.

There is a sense in the church, at times, that the era of long-term overseas mission is behind us; that people who devoted their lives to the church around the world belong only to the history books. We speak now primarily of short-term trips and companion diocese relationships. These are important elements of the church’s role in God’s mission.

At the same time, however, Jenny—and the other long-term missionaries like her around the world—embody our church’s commitment to taking our role in the global body of Christ. Their work with our sisters and brothers around the world is a concrete step towards realizing the unity for which Jesus prayed among his followers. People like Jenny—who shun the spotlight and never imagine their work has any significance beyond its local context—are some of the most important representatives of the Episcopal Church around the world. Their long-term commitments allow them to develop deep relationships and accomplish much.

And so, as Jenny steps away from her work, I pray that we will take a moment to remember the important work of so many around the world whose work often slips under the radar of church discussions but who, by their very presence, embody Gospel truth we yearn to proclaim.

— The Rev. Jesse Zink is an Episcopal priest and former YASC missionary. His book about his time working with Jenny McConnachie is Grace at the Garbage Dump: Making Sense of Mission in the Twenty-First Century. More information is at www.jessezink.com.