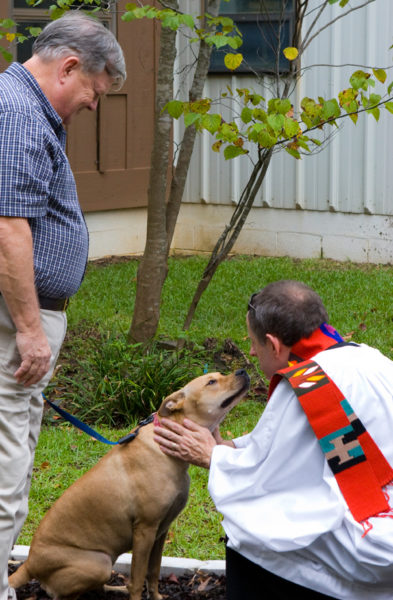 [Episcopal News Service] It rained buckets, but didn’t dampen doggie enthusiasm at the “pink poodle spa” and “Empawium Gift Shop” during a Sept. 29 pet carnival at the Episcopal Church of the Redeemer in Mobile, Alabama.

The “Noah’s Park” pet carnival also featured a petting zoo, horse rides, the Spotted Dog Café and a no-bark silent-auction. And it was just the start of a weekend celebration of St. Francis of Assisi, whose love of animals is traditionally commemorated with pet blessings around Oct. 4.

About 250 people and half as many dogs, attended the carnival, a fundraiser for the church’s St. Francis Guild. It raised about $3,000 to assist the needy in buying food and paying for veterinary visits for their pets, said Carol George, a guild member.

“We have a lot of people who love animals and we started this about five years ago because we felt there was a need for our ministry,” she said. 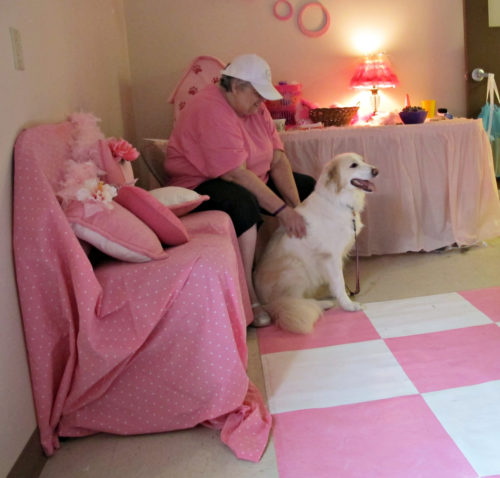 The Pink Poodle Spa at Episcopal Church of the Redeemer in Mobile, Alabama.

Like Redeemer, other churches are getting creative about pet blessings.

In Seattle, Washington, for example, the emerging community of St. Francis the Wanderer, “an outdoor church” is taking pet blessing to the local zoo on Oct. 4, according to the Rev. Sally Carlson.

“This is the first year we’ve done this,” said Carlson during a recent telephone interview, “we’re an emerging mission and we’re just getting up and running. This will actually be our first liturgy together.”

She and others associated with St. Francis will start at the Woodland Park Zoo’s south gate and make a two-hour circuit of the campus, with a dozen or so stops along the way.

“We’re going to bless everything, the birds, the bugs, the nonvertebrates, everything. We’re so excited we can’t stand ourselves,” Carlson said. “It was so kind of the zoo to understand what we wanted to do in terms of honoring creation.”

The emerging congregation was inspired by time Carlson spent “in New Orleans after Hurricane Katrina, when people gathered on street corners. During that time somebody would say, ‘let’s pray.’”

Consequently, St. Francis the Wanderer will be “strictly an outdoor church and be in places that you wouldn’t normally expect people to gather to do ritual — beaches, street corners, hospital parking lots — just different places that, for whatever reason, people are hungry for God but don’t want to go into a church or building to worship. We’re going to minister to those people,” Carlson said.

In Danvers, Massachusetts, the Rev. Thea Keith-Lucas, rector of Calvary Episcopal Church, is also taking pet blessings public and outdoors. She is planning to preside over an Oct. 6 service at the local Endicott Park.

“This is our 10th annual pet blessing and what sets this apart is that they chose to hold it at the public park in Danvers and to invite local animal rescue organizations and the local veterinarian, and to have an ‘ask the vet’ table,” she said during a recent telephone interview.

Each pet blessed will receive a certificate and the church also has an online “paper prayer” form for those to fill out who are unable to attend.

“Volunteers will gather with me and we will read the names from all the paper prayers and offer a blessing for them as well,” she said.

The church also offers a monthly pet blessing service through its “Perfect Paws” pet ministry. Such pet ministries are of vital importance, she said.

“We as a species and as a church have a huge ethical challenge before us in learning to live in creation in a way that honors all the inhabitants of the earth and doesn’t do damage we’re doing with our lifestyle now,” she said.

The pet ministry “connects me to people who really start with their relationship with pets and from there feel called to care for creation and from there to be concerned with the welfare of other creatures,” said Keith-Lucas.

“The relationship with pets is such a powerful one for many people,” she added. “It’s their strongest experience of connection and of unconditional love. It’s something that grounds them and helps them begin to imagine how God might love them,” she said.

“It’s a great opportunity for us to reach out to people in a place that’s already meaningful and spiritual to them and connect it to the heart of our faith and invite them into a closer relationship with God.”

For Carole Pozek, a member of St. Thomas Episcopal Church in Berea, Ohio, a pet memorial service offered the first time this year along with pet blessings was nothing short of miraculous.

By her own count Pozek, 58, a member of St. Thomas for seven years, has three dogs, two menpens, Sophie and Trace, and Izzy, a Chihuahua, plus two rescue cats, Georgie, a tabby, and Buddy Boy, “who is just seven months old, black and light and looks like a little soccer ball. 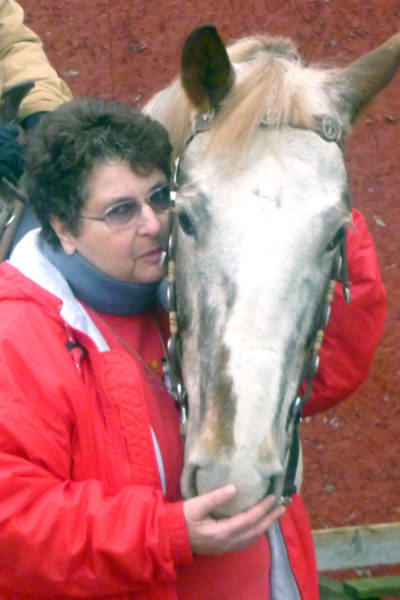 Carol Pozek, a parishioner at St. Thomas, Berea, Ohio, with her horse Pablo, whom she remembered at a Sept. 30 pet memorial service.

She believes that Pablo, her Appaloosa, helped improve her multiple sclerosis. “He got me out of the wheelchair,” she said during a recent telephone interview. “He was special to me in a lot of different ways. He was more like a puppy, he walked right beside me and followed me wherever I went.”

But Pablo died suddenly Sept. 16. “I got a phone call at 9:20 a.m. on Sunday and they told me that during the night my horse died. Nobody knew the cause. I couldn’t be there so it was really hard.”

And Pozek had back surgery Sept. 16, but went to church that same day “even though I wasn’t supposed to be up and out. On the pews were these notices about the pet blessings and that they were also doing memorials for pets. They had never done that before. It was God-given to me.”

The church began an “Epis-ca-paws” ministry a few years ago after a parishioner discovered a St. Bernard tied to a tree with a bowl of water and some toys, with a note asking that whoever found the dog give him a home, Pozek said.

The ministry helps struggling pet-owners with collections of food donations and other efforts, said the Rev. Gayle Catinella, St. Thomas’ rector. “It is a way for members to reach out into the community “and step out of the church building,” she said.

Parishioners place signs and containers in their yards as neighborhood drop-off points for donations and “I finds bags of dog food propped up against the door when I show up for work. This ministry has touched a lot of people’s lives.”

Catinella added: “a lot of what we’re doing is to get us out of the building. The pet blessings are going to be outside on the street so people can see what we’re doing … so hearts can be touched, so that those who know nothing about church can learn a little more about it.”

Similarly, helping those grieving pets was important. “We thought that, as part of the service, we could also have a moment for pets who have died.”

For Pozek, the Sept. 30 service meant everything.

“It was horrible when Pablo died,” she said. “They didn’t call me because I recently had back surgery and they didn’t want me to come down there and hurt myself, and they knew I would come.

“There’s only one place, about an hour west of us, where you can take horses to be cremated. You can’t be there. You don’t get to say goodbye; you don’t really get closure. I never got to hold Pablo or say goodbye. I’m sure he needed me and I wasn’t there. I have guilt about that.”

Her pets, she said, make her smile. She is facing the possibility of yet another surgery so “with everything that’s been going on, I don’t always have a lot to smile about except with my animals.

“I don’t think that anybody should live without an animal,” she added. “I truly believe God puts the right pet into your life, to give you what you need.

“I’m on disability, I can’t afford all these animals anymore,” she hesitated, before adding: “but I find a way, because they I know they will keep me going. And I know that they are God’s gift to me. When I look at people I try to see Christ in them, and I do the same thing with my animals.”