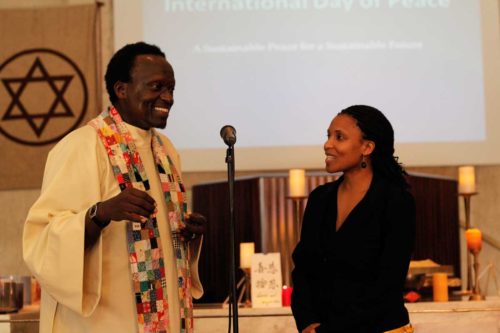 The Rev. Petero Sabune, the Episcopal Church’s global partnership officer for Africa, and Christine Mangale of the Lutheran Office for World Community, singing during a Sept. 21 vigil at the Church Center for the United Nations marking International Day of Peace. ENS Photo/Lynette Wilson

“What is our responsibility for peace in the world?” asked the Rev. Lyndon Harris, executive director of the non-profit Gardens of Forgiveness, who served as priest-in-charge of St. Paul’s Chapel at the time of the Sept. 11 terrorist attacks on the World Trade Center towers.

Quoting Archbishop Emeritus of Cape Town Desmond Tutu, Harris continued, “’… there is no future without forgiveness.’”

Beginning at 8 a.m. 10, 30-minute litanies designed around the theme “The Things that Make for Sustainable Peace” were scheduled to take place through the vigil’s 3 p.m. close. By 8:30 a.m., more than 30 people had gathered at the chapel.

For Harris, working for peace in the world meant first making peace in his own heart, he said. He then asked those present to take stock of their lives, passions and commitments, and ask themselves what is preventing them from being peacemakers in the world.

The Rev. T.K. Nakagaki, a Buddhist priest and president of the Buddhist Council of New York, also encouraged those present to “recognize who you are and what you can do.” He’s most frustrated, he said, by killing committed by those who claim to want peace.

The Rev. Petero Sabune, the Episcopal Church’s global partnership officer for Africa, read from the U.N. Charter signed in 1945, and advised: “Peace is not just documents that are signed, not just governments, peace is us.”

Salwa Kadar, founder and president of the United States Federation for Middle East Peace, described 9/11 as “a nightmare we will never wake up from.” The killing of innocent people was then followed by anger and frustration directed at the Middle East and Muslim people who were innocent, too, she said.

Kadar founded USFMEP in October 2001 to teach people to respect each other and about human rights. In the last 10 years, the organization has added 14 chapters, spanning four continents.

“We are all born with the same rights,” she said. “It is my duty to respect and understand you.”

The 67th session of the General Assembly opened Sept. 18 with the overarching theme of “bringing about adjustment of settlement of international disputes or situations by peaceful means.”