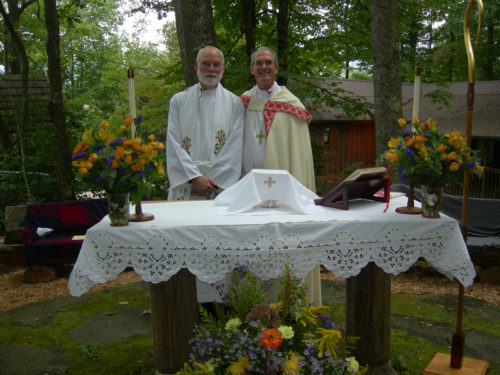 [Diocese of Western North Carolina] On Sept. 16, the Rev. Carl Southerland was installed as rector of St. John’s Episcopal Church in Franklin, North Carolina, becoming the first Moravian pastor of an Episcopal parish since the two denominations inaugurated a full-communion relationship in 2011.

Southerland served in various positions with the Moravian Church in North Carolina for 41 years before joining St. John’s, including positions as pastor at First Moravian, Greensboro, Fries Memorial, Winston-Salem, and Unity Moravian, Lewisville; and associate pastor at Home Moravian in Winston-Salem.

The two denominations formalized the communion on Feb. 10, 2011. The official text of the agreement included a statement explaining, “We seek this relationship of full communion so that our mission as Christ’s church will be more effectively fulfilled and each of our communions might be more complete because of the spiritual treasures of the other.”

Guthrie spoke about the Moravian Church’s focus on unity, quoting the Moravian Book of Order and its charge to “seek unity in Him with zeal and love.”

After the ceremony, Taylor reflected on the importance of the event. “Having Carl Southerland as the rector of St. John’s is an outward and visible sign of our full communion with our Moravian brothers and sisters,” he said. “It not only pleases God to have God’s children work together in this way, it enriches both our denominations and enables us to be much more effective as ministers of Jesus Christ.”

Taylor also spoke about the need for people of faith to come together during times of strife.

“In an age addicted to division, I am proud that our two churches are offering the world a different way,” he said. “Being in full communion with Moravians and Lutherans enables all of our denominations to be more effective, more nimble, and more expansive. I am very excited for St. John’s, our diocese, and the wider churches.”