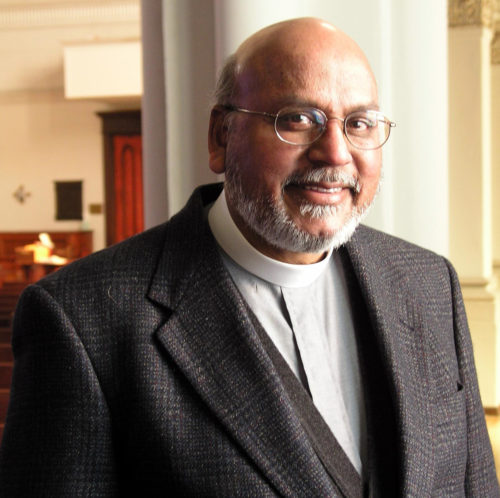 [Episcopal News Service] Our hearts are saddened as we watch the violence that has erupted across the world in protest to an anti-Islam film. It has already caused human loss of lives such as Ambassador Chris Stevens and three other Americans serving in the United States consulate in Benghazi, Libya.

It reminds me of images of November 1979 of the burning of the U.S. embassy in Islamabad, Pakistan. I was then the rector of St. Thomas Church in Islamabad. I witnessed with my own eyes the rage and destruction caused by thousands of students demanding “death to America.”

I also express my protest to this person who made a movie demonstrating scathing attacks on the prophet of Islam. Secretary of State Hillary Rodham Clinton has made it clear to the Islamic world with her statement, “This awful internet video that we had nothing to do with.” Enemies of the United States such as al-Qaeda are using it to their advantage to target American presence abroad.

America is a land of liberty and millions of immigrants have come to her soil to enjoy many freedoms. At times misguided individuals use their freedom of expression in harmful ways. In 1989, American artist and photographer Andres Serrano, in the name of art, displayed a photograph of a small plastic crucifix she titled “Piss Christ.” This cross was submerged in a glass of the artist’s own urine in a New York museum. This is not only an offensive expression of art but also a terrible abuse of free speech. It appears to be done with malicious intentions to cause hurt and disrespect to the followers of a certain faith community.

Equally contemptible were the actions of one individual who made a movie to insult Muhammad. We cannot take these events lightly. As Americans we are not living in isolation from the rest of the global community. If we desire respect we need to earn it by showing respect to others.

Free speech doesn’t give license to offend. People of faith must condemn the actions of those individuals who have intentionally hurt the sanctity and harmony of our faith communities. But I fear the repercussions for Christian minorities living in Muslim countries. Many of them already live under the fear of persecution with very little guarantee of basic human rights.

I have often wondered what inspired Christians in the Roman Empire who were persecuted and killed for confessing the name of Jesus Christ. In our own modern days of the 21st century we learn of the persecution of Christians in Sudan, Pakistan, Iran, Egypt and many more countries.

For the church in Pakistan there is no other option for the faithful followers but to lift up to the hills and behold the cross of Jesus. In the valley of the shadow of death thou art with me. That is their witness as they continue in the face of persecution, discrimination and acts of terror serving that nation through their schools, hospitals, leprosy clinics, schools for the blind and literacy centers.

It is on the cross of Jesus the powers of hatred and violence were defeated that meek and weak may have a life of hope and resurrection.

What Jesus calls us to do is not always pleasant; it is not always easy; it should not be done without serious contemplation. He wants us to know very clearly what it may cost to follow him. Some of us wonder “Am I worthy to be a disciple of Jesus?” Do I have stamina, perseverance to carry his cross?

Martin Luther was right when he said:  “God can carve the rotten wood and ride the lame horse.” Jesus chose just such people: fishermen and tax collectors, known as sinners and zealots. They were not particularly part of the religious establishment. Jesus took these ordinary earthen vessels and filled them with His grace and power to lift high the cross.

One thing the Gospel makes clear: “If any want to become my followers, let them deny themselves and take up their cross and follow me.”

— The Rev. Canon Patrick Augustine is rector of Christ Episcopal Church in La Crosse, Wisconsin. His e-mail address is patchristch@centurytel.net.