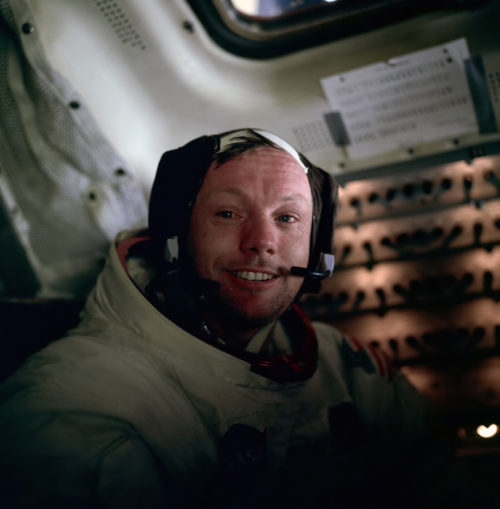 Neil Armstrong smiles for the camera after returning to the Apollo II command module on July 20, 1969, after spending two-and-a-half hours on the moon.

[Episcopal News Service] The United States honored “the first human being to walk on another world” at Washington National Cathedral Sept. 13 with a combination of Scripture, a voice from the past, tributes, traditional hymns and Frank Sinatra.

Neil Armstrong, 82, “can now finally put out [his] hand and touch the face of God,” Eugene A. Cernan, the Apollo 17 mission commander and last man to walk on the moon, said during the service.

Armstrong died Aug. 25 of complications resulting from cardiovascular procedures, according to a family statement. He had undergone heart bypass surgery earlier in August in Cincinnati, Ohio, near where he lived. A private memorial service was held there on Aug. 31.

Armstrong, a Navy pilot, is to be buried at sea on Sept. 14.

The cathedral was filled with people who heard Armstrong described during the service as a humble man who never sought the limelight, even after having made history by being the first person to set foot on the moon. On July 20, 1969, Armstrong and co-pilot Col. Edwin E. “Buzz” Aldrin Jr. put their lunar landing craft, Eagle, down a rocky stretch of land near the southwestern shore of the moon’s Sea of Tranquility.

The first Scripture reading during the service was Exodus 3:1-15 in which Moses is forever changed by his encounter with God in the burning bush. Diocese of Washington Bishop Mariann Edgar Budde said during her homily that most people assumed that Armstrong’s burning-bush moment were the two-and-a-half hours he spent on the moon. 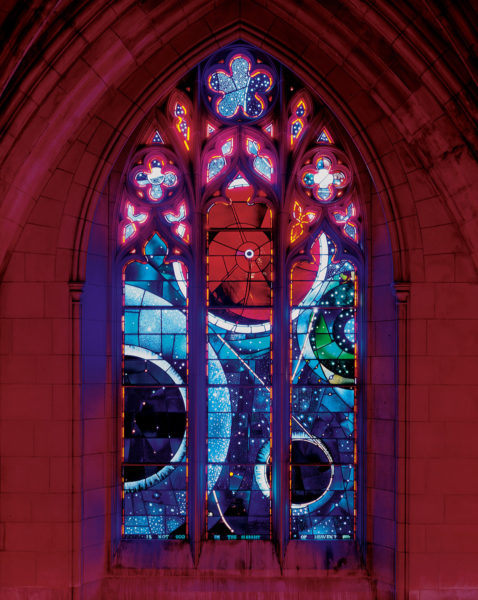 However, she said, the astronaut downplayed that experience and instead often spoke about experiencing the fragile-appearing earth from his spacecraft. Armstrong, she said, worked “for the survival of the only planet we human beings call home.”

Cernan, who described Armstrong as a “world icon” and “the first human being to walk on another world,” said the astronaut called himself “the tip of the arrow” launched by the 400,000 NASA workers who, with the American people, gave him “the opportunity to call the moon his home.”

Much was made at the time of how the fuel gauge on the lunar landing module was on empty before Armstrong and Aldrin landed the Eagle. Cernan said that when Armstrong was later asked about those moments, he’d reply “‘Well, when the gauge says empty we all know there is a gallon or two left over.'” The audience laughed as Cernan recalled the comment.

He described how on each of three journeys he, Armstrong and fellow astronaut Jim Lovell made to Afghanistan and Iraq to visit soldiers, Armstrong was less concerned about his celebrity status than how the troops were faring.

Former Secretary of the Treasury John W. Snow recalled the legend he knew as a friend and “a man with an unusually strong and clear sense of his calling in life” not as an astronaut but a Purdue University-trained engineer who wanted to improve flight.

“I think he, indeed, had been put on earth to fly,” Snow said, calling Armstrong “the most reluctant of heroes.” 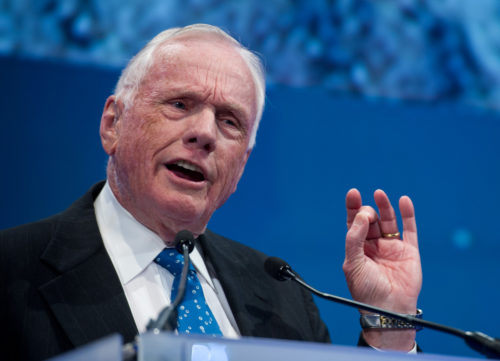 Astronaut Michael Collins, now a retired Air Force major general who remained in lunar orbit while Armstrong and Aldrin were on the moon, led the prayers during the service. He thanked God “for your servant Neil Armstrong, who with courage and humility first set foot upon the moon. Following his example, save us from arrogance, lest we forget that our achievements are grounded in you; and by the grace of your Holy Spirit, protect our travels beyond the reaches of the earth, that we may glory ever more in the wonder of your creation.”

The service’s procession entered with the congregation singing “Praise, my soul, the king of heaven,” which includes the words “sun and moon, bow down before him, dwellers all in time and space.”

The first reading was an audio recording of an excerpt from President John F. Kennedy’s so-called “moon speech” delivered on Sept. 12, 1962, at Rice University in Houston, Texas. During that speech, Kennedy called for landing an American on the moon before the end of the 1960s.

“As we set sail we ask God’s blessing on the most hazardous and dangerous and greatest adventure on which man has ever embarked,” Kennedy said.

The U.S. Navy Band’s Sea Chanters sang “Eternal Father, strong to save,” which is known as the Naval Hymn and is included in the Episcopal Church’s Hymnal 1982 as hymn 608 and later jazz singer-songwriter Diana Krall, seated at a grand piano, sang a quiet rendition of Frank Sinatra’s “Fly Me to the Moon.”

At the beginning of her blessing, Budde told the congregation to “go forth into the world in peace; search the cosmos, it is the Lord’s; and may the God of all strength nerve you with the courage of the astronauts.”