[Episcopal News Service] When the community kitchen moved out of Calvary Episcopal Church in Ashland, Kentucky, after 30 years, parishioners wondered what to do next. “We have no idea what we should be doing to help our neighbors in need. We’ve got to find something to replace this,” they told the Rev. Ron Pogue when he arrived as interim rector in February.

Pogue suggested Calvary join the Louisville-based Blessings in a Backpack program, which provides weekend food packages during the school year for children who receive free or reduced lunches. “I said, ‘Let’s see if we can feed 100 kids.’”

“There were a few skeptics,” he said. 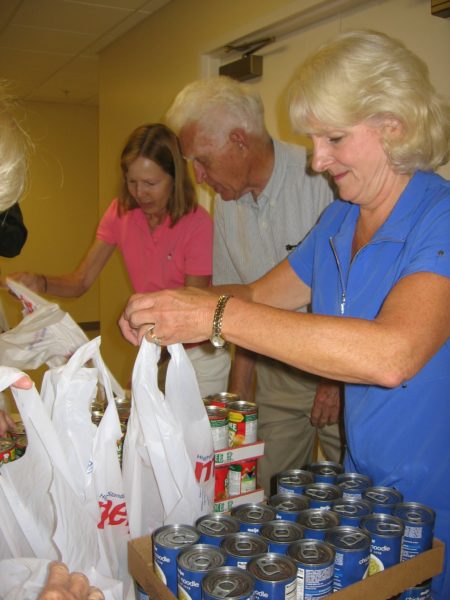 The Blessings in a Backpack program involves parishioners of all ages at Church of the Good Shepherd in Lexington, Kentucky. Here, Kathy Gross, left, Ken Miller and Karen Furlow help prepare food packages for delivery to a local elementary school. Photo/Joyce Roth

But seven months later, Calvary members have pledged to feed 112 children at Crabbe Elementary School – where 94 percent of students qualify for free or reduced lunches – at $80 per child for the entire year. They are poised to start buying, repackaging and delivering the nonperishable food as soon as the school identifies the recipients. And they hope additional pledges and grants will let them feed even more children, said Jeannie Broughton, who coordinates the program with Deacon Diane Zwick.

Through various “backpack” programs, Episcopal churches such as Calvary are providing food for needy schoolchildren who otherwise might go hungry during weekends. More than 18 million children qualify for free or reduced price meals through the National School Lunch Program, according to Feeding America, but that only feeds youngsters on school days. Through Feeding America’s BackPack Program, nearly 230,000 children receive weekend bags of food assembled at more than 150 local food banks.

Every two weeks, Harvesters in Kansas City deliver pallets of free food to the church. About 30 parishioners pack the food into plastic bags in the backpacks – usually adding some donated fresh fruit – and deliver them to the participating schools each week.

Trinity became aware of the program and got involved thanks to Hazen’s sister, Jeanne Fridell, a local school principal. The individual schools choose which students receive food assistance.

“We initially targeted the schools that had the higher percentage of children that were eligible for free or reduced lunch,” Hazen said.

Blessings in a Backpack, which feeds nearly 62,000 children in 437 schools in 42 states and three countries, uses a different model. Blessings provides nutritious menus, and participating partners such as Calvary meet with local grocers to see which will meet the “price points” to deliver the food for $80 per child for 38 weeks, Pogue explained. Calvary reached an agreement with a local Wal-Mart, which will provide the food at a cost of less than $2.10 per child per weekend.

“The national Blessings in a Backpack program has a nutritionist who works with them to set up menus so that we’re sending good-quality food home with the kids, not junk,” Broughton said.

Parishioners will pick up the nonperishable items, package them in Ziploc bags and deliver them to the schools for discrete distribution to students, Pogue said.

“It’s a beautifully set up program that has a minimum of administration to it and a maximum of helping the kids,” said Zwick, who has seen the need for food assistance for children first-hand at the Ashland Child Development Center, where she is board of trustees president.

“Some children just aren’t fed the way they should be at home, and they come in Monday mornings and they want four or five bowls of cereal,” she said. “It happens in public schools also.”

Getting the food to the children can be easier than convincing a family to receive aid.

“Last year, I got a call from the principal of one school, and the child was caught stealing food in the cafeteria on Monday morning. And that was because the child hadn’t eaten all weekend,” recounted Diane Wilson, parish administrator at St. George’s Episcopal Church in Summerville, South Carolina. Through its Backpack Buddies program, the church fed about 20 children in two schools last year and anticipates feeding about 45 in five schools this year.

“I put out an e-mail to everybody I could find. Everybody brought me food,” she said. But they hit a roadblock. “That’s where the pride came in. The parents wouldn’t take the food. They didn’t want the school intervention.”

She sees hungry children as part of a larger problem. “My thought is, if the child isn’t getting food, that means that the whole family isn’t getting food,” she said. The church’s next step, she said, is to work with schools to create a pantry “and supply food for the whole family, not just the children in their backpacks.” They’ve also discussed opening a thrift store.

St. George’s funds the program – which costs about $240 per child for 10 months – through parishioners’ donations. “It’s all on faith that we’re doing this every month,” she said. “We’re just thankful that we can get them the food.”

Besides helping hungry children, the backpack programs provide a way for church members to get involved in outreach and build community. 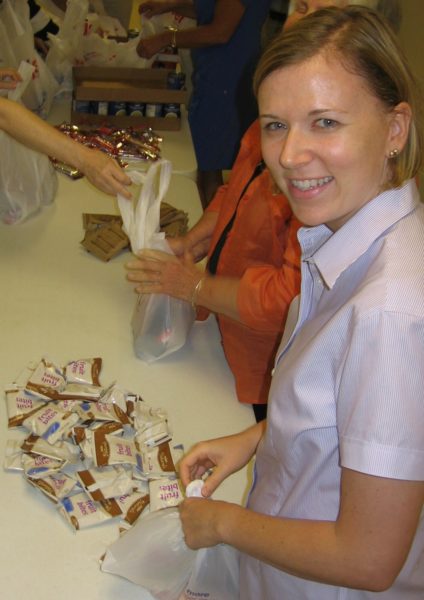 Virginia Valentin chairs the Blessings in a Backpack program at the Episcopal Church of the Good Shepherd in Lexington, Kentucky. The program is in its second year at the church. Photo/Joyce Roth

“We got involved in this ministry last year, and it involves a large number of our folks every week helping to fill 60 backpacks for kids,” said the Rev. Brian Cole, rector of the Episcopal Church of the Good Shepherd, a Blessings in a Backpack participant in Lexington, Kentucky. “It’s a very hands-on, active outreach program around food and getting food to kids who are in need. … It ends up gathering all of our generations here.”

To Broughton, the gospel imperative for such ministries is obvious. “We’ve been given very clear instructions that we need to go out … and do as Jesus would have done and take care of others,” she said. “Our faith isn’t very substantial if we keep it inside of four walls.”