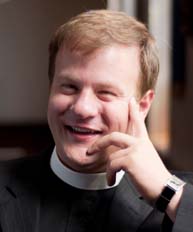 [Episcopal News Service] It has been nearly two months since the beginning of General Convention 2012.  As a deputy, I remember the excitement around the idea of doing things differently.  The cynical side of me says that we will cut staff and resources, but ultimately seek to preserve an institution that acts the same way and produces the same results.  The optimistic side of me thinks that we are on the verge of being the church that God has called us to be for decades.  I think there is a bit of both in most of us.  Most of us are fearful that the church we all love is slipping through our fingers and yet we feel powerless to make any real change.

In order not to let my cynical side win and to really change, we need to stop lying to ourselves.  We are not as important as we think we are, and the world often chooses to ignore us.  Yes, that saddens and frustrates me, and I think we are in the process of changing.  People ignore us because we sometimes love our institution more than we love Jesus.  I love the Episcopal Church, and I love Jesus even more.  I know I am guilty of defending an institution when I feel that Jesus is calling us to something different.

In order to find what is at the core of the Episcopal Church, let’s start to have real, honest and frank discussions about where we are now and where we feel God is calling us to go.  This means listening to cynics and optimists alike and even those outside our own denomination.

We are also really good at simply ignoring Jesus when it makes us uncomfortable or calls us to really sacrifice something.  I will confess that I struggle with giving up something that I really care about, even if I know it will transform me and/or the larger community. We all know that by going through the motions as individuals or communities, we only fool ourselves.

Being the Body of Christ in the world means worrying less about being “nimble” (a General Convention buzzword) and more about being relevant. To be relevant we need to be a church that is actively engaged in changing the world and is a moral voice on all levels.  It broke my heart to hear people say that General Convention resolutions concerning social issues did not matter because the government does not care what we think.  It broke my heart because I knew they were correct.  I wonder if that is the politician’s fault or ours?  What if politicians did care what we think?

We need to let go of our self-aggrandizing goals and seek to build a truly new church that responds to the needs of the world, with word and action.  To most of my non-church attending friends, the Episcopal Church, like most churches, appears to care about the world most when it suits our own needs or makes us look good. Our ineffectiveness has not gone unnoticed by those outside the church. The Episcopal Church I know is a different church where great work is being done, and I think we are capable of much more.

A huge part of change is engaging in a process of self-sacrifice and owning our own accountability in the system.  If you are concerned with, for example, ministry to Spanish-speaking people or university chaplaincies (or whatever), then stop looking just to your diocese or the Episcopal Church Center to solve the problem. We need to start claiming our own authority to solve problems for our own ministry contexts. Claiming our own local authority balanced with our recognition of our mutual interdependence will help us forge a new path that others will want to join.

Speaking of our own authority, let’s not sit around idly and wait for a restructuring committee to give us all the answers we need. This transformation needs to start at the parish level or diocesan level while the restructuring committee does the work that it needs to do on the largest levels of our church.  We do not need a report from a committee to start to hold each other accountable and start to transform the church.  You have more responsibility than you think, and God is calling you to use it.

– The Rev. Alex Dyer is priest-in-charge at the Episcopal Church of St. Paul & St. James, in New Haven, Connecticut.