[Episcopal News Service] Casey Hill spent the day job-hunting, searching for possible leads and filling out online applications at a nearby library before returning to Craine House, her “home” of four months, on Indianapolis’s north side.

“I put in a million applications for any kind of job, if anyone will hire me,” said Hill, 26, six months pregnant, tired and craving Swiss rolls and salsa. “I find it’s a lot harder to get a job when places see you’re pregnant.”

She discovered she was pregnant during intake at the Rockville Correctional Facility, a medium security facility and the largest women’s prison in Indiana.

“A guy I was dating stole some things. They were found in my possession,” she said. “I was charged with receiving stolen property and sent to prison in February 2012.”

Then the miraculous happened.

She was offered an opportunity to complete her sentence at the John P. Craine House, a ministry of the Diocese of Indianapolis, which for 33 years has offered alternatives to nonviolent women offenders with preschool age children. The program allows women to serve their sentences with their children.

“I’ve finished the parenting courses and I’m taking a job readiness class and a life skills class” as well as receiving counseling.

For Hill and the other women residing in the nine-bedroom home the experience “means a little more freedom.” It offers a supportive, nurturing environment for moms and their children. There are weekly “women of wisdom sessions where we all can sit and talk and let each other know how we’re doing. On weekends, everyone pitches in and cooks together.”

Some women stay as long as two years; Hill’s release or “outdate” was Sept. 6. The time at Craine House has “helped prepare me for the baby, instead of being tossed out of prison nine months pregnant,” she said.

Tannika Patton is the program director at Craine House, which after relocating in January 2013 will be able to accommodate 30 residents. “It was founded in 1976 by John P. Craine, who was an Episcopal priest and who saw the need for this kind of program,” Patton said.

The three-story dwelling includes bedrooms for nine residents, and kitchen, living and dining room and common areas as well as playroom, classroom and administrative office space.

“I love my job,” added Patton. “Residents are given the opportunity to complete their GED (general equivalency degree) as well as other life skills to help prepare them to return to the community and to make a better future for themselves and their children,” Patton said.

According to the website, Craine House has attained a 20 percent recidivism rate —enabling young women who have made poor choices in the past to become responsible parents and more productive members of the community.”

For Hill, the opportunity won’t be wasted. “Nobody wants to be away from home and pregnant. I’m doing a lot to stay away from prison.”

‘Trap Money’ and ‘Safe Dance’ in Missouri
The Rev. Dietra Wise uses hip hop music and “safe dance” to reach female juvenile offenders through the Episcopal City Mission, a ministry of the Episcopal Diocese of Missouri. 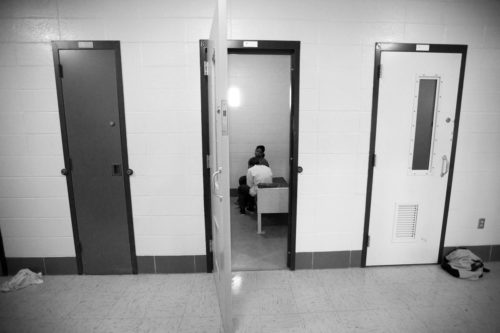 “We have quarterly hip hop concerts with poets and rap artists that are faith-based,” said Wise, during a recent telephone interview. “We share the ministry and the music; it makes a strong cultural message with kids. It gives them a positive message, letting them know how much God loves them and how much God’s not finished with them yet.”

The music she uses is inspirational, faith-based and hip hop. “I don’t use the stuff they would listen to although they can’t tell it when they first hear it,” Wise said.

“We take time to understand the message being communicated. It sounds like their music but I have them listen to the words and understand what message God might be sending to them through the song.”

“I use this song because a lot of them go to trap houses in the community where drugs are sold and where a lot of negativity in the community comes from,” Wise said. “The song is talking about the trap money is good but it brings all kinds of problems.”

“Safe Dancing” is another way she connects with juvenile offenders. “It’s great exercise, for one thing. We choreograph dances and then we perform at ministry events, churches, and special events. We try to create a space for what would be considered youth group anywhere else, a space where the kids can grow spiritually.

“But it’s a little more hard core than the average youth ministry, in terms of topic and content, the stuff we talk about, because what they bring to us is … drugs, sex, babies, fatherhood. A percentage are in serious trouble and they have to make a shift or they will be part of the pipeline to prison.”

Wise counsels youth mostly aged 12-17 “although I’ve seen them as young as nine” who have committed crimes ranging from misdemeanors to felonies up to and including murder. She serves at several youth facility campuses in and around the St. Louis area.

A young woman whom Wise mentors is 18 and was involved in a case that ultimately sent her mother to prison. “The young lady got off because she hadn’t had any contact with the court before and it was determined that she was under her mother’s influence. Now, she’s on her own … but has very little support. And, she’s pregnant.”

The mentee does well in school, finished her GED, but family dysfunction and lack of family support has meant that “it has been hard to move her from getting by, living day to day.”

Wise also takes her youthful mentee to visit her mom in prison, and on other outings. “I try to only participate in things that are helpful, like a job interview or taking them up to the college.”

The diocese funds 90 percent of the ministry, she said. “In a very real way the ministry would not exist without the Episcopal Diocese of Missouri and its churches.”

Local churches also hold monthly birthday parties for the juveniles, sponsoring them and spending time with the youth, who desperately need love and attention. “They love the church people. They do all kinds of fundraising events during the year and participate in the volunteer visiting programs for kids who don’t have visitors,” said Wise, who is ordained in the Disciples of Christ Church.

Reimagining lives in Los Angeles
Episcopal nun Greta Ronningen in August brought together laity and clergy volunteers for a day of encouragement with 65 incarcerated young women aged 13-18. They are facing a range of criminal charges, from misdemeanors to felonies, in the Los Padrinos Juvenile Facility near Los Angeles.

The three-hour event included music and poetry and presentations by some of the young women themselves, Ronningen said.

“We just wanted to be with these girls and help them reimagine themselves,” she said during a recent telephone interview.” Transforming love was just moving through the place. It crossed the barrier of us and them and that was what was so beautiful. It said, we are family, we care about you.”

Through a three-year grant from the Episcopal Church Foundation for transformational ministries, Ronningen is able to offer informational classes on stress, anger, forgiveness, power and control, abusive relationships, healing as well as teaching breathing, meditation and other coping skills to juvenile female offenders. There are also opportunities for Christian formation and faith-building, for deepening relationships with God.

She has served for nearly four years as a chaplain for Prism, the restorative justice ministry of the Los Angeles diocese. She visits inmates at the Twin Towers facility in downtown Los Angeles and other locations. She is also a founding member of the Community of Divine Love, an Episcopal religious order in the Benedictine tradition, headquartered in San Gabriel.

Several girls, whose identities are withheld on request, created a skit with Ronningen to address issues, ranging from prostitution and theft to murder, that the girls contend with in their own lives.

The characters included “the drunk mother” portrayed by Ronningen, as well as “Holy Hannah; Wounded Wendy; Angry Angie, Casey the cutter and Suzy Stoner”. The girls also created banners with affirmations and heard meditations from clergy and volunteers.

“We wanted to encourage all of these girls to know they are made in the image of God and within every single one of them the Holy Spirit is residing in love. They all have a path to healing from whatever. So many of them have been hurt and wounded in their short lives more than most people in an entire lifetime.”