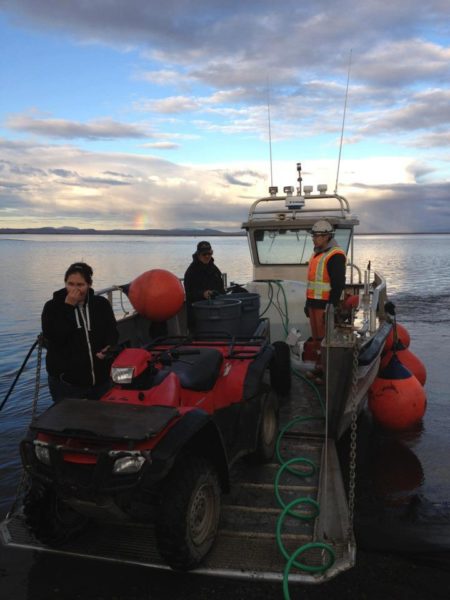 [Episcopal News Service] Harsh weather conditions and extreme storm warnings are nothing new for the residents of Kivalina, but the late summer’s heavy rains and subsequent rising water levels have left the island community without clean water and delayed the start of school locally.

“According to a friend, NOAA [National Oceanic and Atmospheric Administration] had predicted a few months back that they expected 2012 weather systems to be on the extreme side. That prepared some of us mentally to expect worse than usual weather patterns, but we take it for granted that the weather is just going to be stronger than normal,” said Colleen E. Swan, a member of Kivalina Epiphany Episcopal Church and Kivalina Church Women treasurer, in an e-mail to ENS.

“I never gave much thought to what may come with it, such as having our water pumping system fall into the water and not being able to fill our water holding tanks. I never thought that more rain water meant less drinking water or that our school start-up would be cancelled ‘til further notice,” she continued.

Heavy rains flooded the community’s landfill and damaged its water system, which includes a pipeline that carries drinking water from the nearby Wulik River to the village’s two water-storage tanks, according to news reports and updates to the Kivalina Water Facebook page.

“… we lost part of our pipes into the river, as well as the concrete block holding the end up by the mouth of the river. We cannot pump until we find new pipes but we have no monies to purchase any,” said Janet Mitchell, a city administrator and secretary of the Kivalina Epiphany Church Mission Committee in an Aug. 29 post on the Facebook page.

The onset of winter may further complicate repairs, said Mitchell in a CNBC News story Sept. 5.

In addition to the water tanks, the pipeline supplies water to village’s school and its teacher housing. School was scheduled to start on Aug. 20, and according to news reports, school officials expect school to begin in Kivalina by Oct. 1. (While the school, the teacher housing, the washeteria and the health clinic have running water, residents of Kivalina don’t have indoor plumbing in their homes and carry potable water from storage tanks.)

The village of Kivalina sits on the tip of a six- to eight-mile-long barrier island – a quarter-mile at its widest – some 80 to 120 miles above the Arctic Circle between the Chukchi Sea and the Kivalina Lagoon in Alaska. It is home to about 400 Inupiat people and reachable only by plane and boat in the summer and plane, and snowmobile in winter.

“We are in a catch-22 situation where the community needs the fresh water from the rain. But at the same time, all of this rain is also causing a delay in filling the water tanks because of the high turbidity level. And that was the situation till more rain came and damaged the water pumping system. I fail to understand why the state of Alaska has not declared a disaster, especially when this situation has caused our school to remain closed,” said Swan.

“Once again our family in Kivalina is struggling against the forces of nature. Consistent with the spirit of a people who have thrived for centuries in one of the harshest climates inhabited by humankind, the people of Kivalina are working to provide for their village despite yet another unique natural ‘disaster,'” said Diocese of Alaska Bishop Mark Lattime.

“People who know the story of the village of Kivalina, understand that the village is slowly eroding into the ocean. The process of erosion is accelerating with the loss of sea ice caused by warming oceans. Recently, however, Kivalina is facing rising waters and flooding due to an unprecedented weather pattern that has brought rainfall to the area for several weeks. So far rainfall has exceeded 12 inches. The result has been the complete breakdown of the community’s fresh water supply.”

Not only has the flooding washed away the pump that draws fresh water from the river source that supplies the village, but the flood has also caused the river to become too turbid to filter, making it impossible, or useless, to drawn water from the river by hand. Adding to the challenge, the village’s power generation plant, in an effort to provide lower-cost electricity, has been burning “used” oil. The result is that the exhaust from the plant has made gathering rain water also impractical as runoff from roofs is polluted by soot—the byproduct of burning used oil, Lattime added.

The children of Kivalina have been evacuated to Kotzebue, a regional hub, where they can attend school while the village works to restore its water resource. The school in Kivalina remains closed, said Lattime.

“Despite on-site inspections by the [U.S.] Department of Homeland Security and the governor [of Alaska], Kivalina has been left to address the problem on their own. However, just as it requires enormous cooperation to successfully hunt a bowhead whale, the traditional food source of these Inupiat people, the people of Kivalina are working together to solve their water crisis. The plan is to coordinate volunteers using ATVs and small boats to travel up the Kivalina River to find areas where the water is less turbid and able to be properly filtered for human consumption. These volunteers will collect the water in portable containers and, upon returning to the village, the water will be used to refill the community water tank.

“Monumental task? You bet. Will they succeed at it? Most certainly,” said Lattime.  “Monumental tasks that require cooperation and hard work define the traditional spirit of the people of Kivalina. Nevertheless, they can use help. Mostly they need financial resources to help purchase fuel for the equipment they are using to get to the clear water. The price of gasoline in Kivalina is over $6 per gallon, and it will take hundreds of gallons of fuel to make enough trips to refill the community water tank.”

The Diocese of Alaska, after consulting with the leadership in Kivalina and asking them what they needed, contributed $1,000 to aide their efforts. It is certain that they could use more financial support until their fresh water system is back in full operation and the river has settled, said Lattime.

“Then they can return to working on a solution to the slow erosion of their island home,” he said.

Early this summer at the 77th General Convention in Indianapolis, Indiana, Austin Swan Sr., a deputy from the Diocese of Alaska, and a resident of Kivalina, shared his firsthand experience with climate change and its threat to the community’s continued existence during a hearing on Resolution B023.

Of the 200 native coastal communities in Alaska, varying degrees of erosion affect about 180 of them, according to the federal government’s General Accounting Office. The U.S. Army Corps of Engineers has said that Kivalina is one of three native communities in need of relocation.

As explained in the resolution’s explanation, Kivalina “has been ever-increasingly at risk because of global climate change. Loss of sea ice has led to increased coastal erosion, land failure, and unreliable, if not perilous, conditions for the practice of subsistence hunting.”